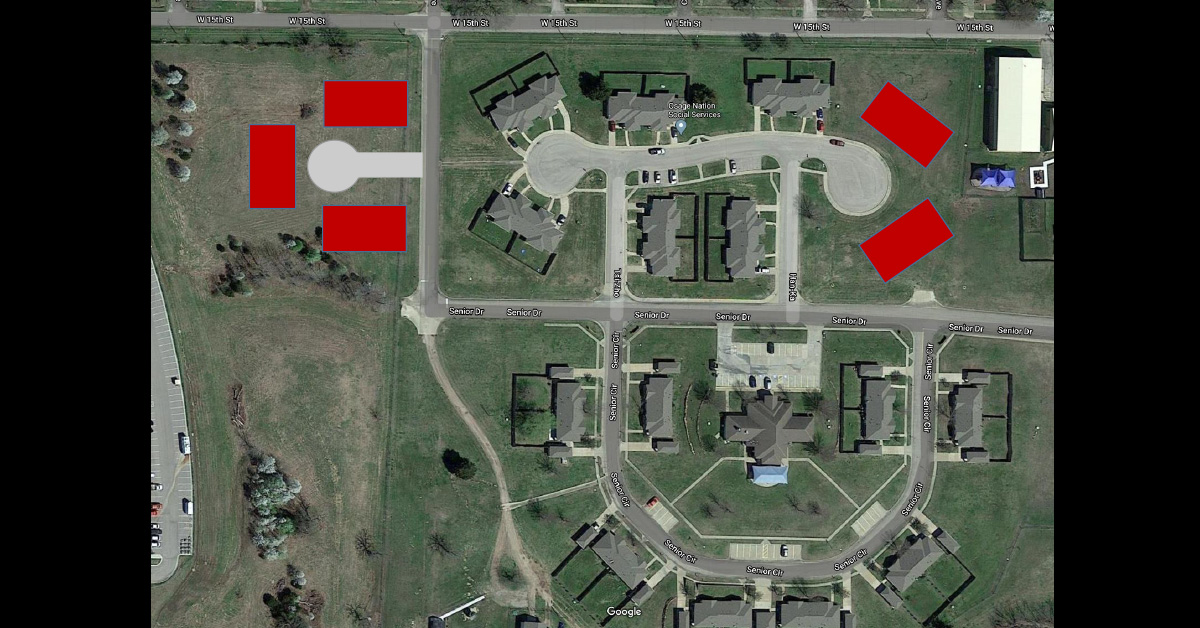 Housing units to be added to Pawhuska Senior Housing complex

Photo caption: The red rectangular boxes show the areas where the additional housing units will be built in the Pawhuska Senior Housing complex. Courtesy Image/James Weigant

The Osage Nation has plans to build additional senior housing units in the Pawhuska Senior Housing complex, something many community members have been asking for.

“We plan to build five duplexes, for a total of 10 additional housing units,” said James Weigant, ON Housing Director. “The new units will look like the phase two units on the north side. That would be a two-bedroom, one bath unit with an enclosed garage and tornado safe room. We are updating the architectural and engineering plans to the current building codes. Any modifications from the phase two design will be minor.

“We hope to break ground the summer of 2021 and have units ready that next late fall or early winter.”

It has been over 15 years since phase one of the Senior Housing Complex was built on the Osage campus, using funds from the Native American Housing Assistance and Self-Determination Act (NAHASDA). The second phase, according to Weigant, was built in 2006.

There are currently 28 housing units and a waiting list.

“This a neighborhood of fellow Osage Elders, across the street from Elder Nutrition and a very short drive to the clinic and all other amenities provided in the Osage Nation capital,” Weigant said. “We have a 24-hour emergency line that is answered by employees living here in Pawhuska. The Housing Department offices actually face senior housing, so we literally keep eyes on the property throughout the day.

“The greatest benefit of living in senior housing is the oversight and maintenance of the units.  Our 24-hour emergency line has been called in the middle of the night to unlock a unit for the ambulance or stop a gushing water leak.  Even little things like light bulbs or a drippy faucet are addressed quickly by our senior housing employees.”

Weigant said there are plans to build additional Senior Housing complexes in Fairfax, Hominy and Skiatook. He said they conducted a survey among the seniors on the waiting list and Pawhuska was the overwhelming popular vote. When they do expand into the other communities, he said they have to do it responsibly by taking into account the proper support of the units when it comes to emergencies and service calls. That could mean outfitting and equipping an entirely new crew to be on location, he said.

To live in the housing units, a person must be classified as low income per HUD standards. The individual must be Native American and at least 55 years of age or older. All applicants are rated and ranked and then placed on a waiting list in order of their points awarded, he said. Additional points are given for years of age over 55 and for being Osage, a veteran, and/or disabled. The units are ADA compliant, but the units are not assisted living. Individuals must be able to safely live in the home by themselves or with a caretaker.

Rent is based solely on each tenant’s total household monthly income. The housing department charges rent in the form of 15% of the individual's monthly household income. IIM account income is only counted or factored in if it is the sole source of income.

For more information, contact the Osage Nation Housing Department at (918) 287-5310 or toll-free at 1-800-490-8771. The housing department office is located in the Nation’s Welcome Center in Pawhuska.