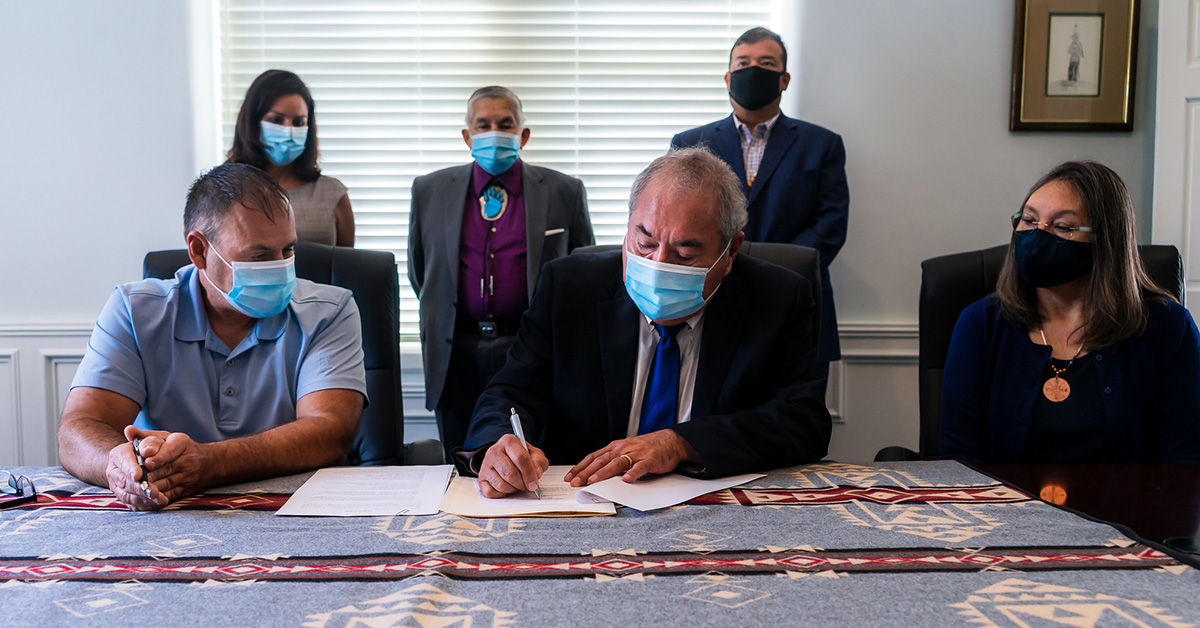 The years-long process for putting two Osage Nation-owned land tracts into trust for gaming purposes at Pawhuska and near Bartlesville is complete as of Sept. 21.

“What we’re doing today is signing the official papers for the land to put into gaming status for Indian tribes for the Pawhuska and Bartlesville properties and this will complete our Osage gaming acquisition for our gaming areas in the last reservation area we now call Osage County,” Standing Bear said.

Also joining Standing Bear for the signing was Eddie Streater, Regional Director of the Bureau of Indian Affairs Eastern Regional Office in Muskogee. Due to the COVID-19 pandemic, Streater has delegated signature authority for the documents from the Secretary of Interior’s office so there was no signature ceremony planned in Washington, D.C., Standing Bear said.

Terry Mason Moore, legal counsel for the Executive Branch, said she worked with Kimberly Pearson, Osage Casinos Executive Director, and Melissa Currey, director of ON Real Estate Services, and the Gaming Enterprise Board on the trust documents for the lands, which took several years to process. “The deeds will be signed, and the properties will go into trust – then we’ll do gaming,” she said.

The Osage County land tracts at issue include approximately 125 acres located two miles west of Bartlesville just south of U.S. 60. The Pawhuska parcel is 63.1 acres located at the three-way intersection off State Highway 99 and U.S. 60, across from the El Vallarta restaurant. The applications were first submitted to the Bureau of Indian Affairs (BIA) in 2014 and 2016, respectively.

Expanded gaming and hotel amenities on the new trust lands means the current long-time Pawhuska and Bartlesville locations will eventually relocate. The Pawhuska casino opened in 2003 and is located on the Pawhuska Indian Village property. In 2006, the Bartlesville casino opened on country property located approximately five miles west of State Highway 123 and four miles south of U.S. 60.

“We are so excited that this day has finally come, we had to go back and forth and gather many, many documents to provide … Now, we are in a position to continue the growth of our gaming and really move our tribe forward,” Pearson said. Osage Casinos CEO Byron Bighorse called the occasion “a long time coming” and he is “really excited to get started on the projects in the near future.”

“We intend to build as soon as possible on our Pawhuska and Bartlesville (new locations), which will really advance us for more money to the tribe,” said Mark Simms, chairman of the Nation’s Gaming Enterprise Board.

Amid past disagreements between the BIA and the Nation, Standing Bear noted the milestone is “evidence of cooperation and progress that can be made through cooperation with the Bureau of Indian Affairs and them working with us.”

Streater thanked the Nation for the invite to the documents signing in the Executive Branch conference room. “The collaborative effort is really key in getting these to go through, there’s a lot of hoops to jump through, a lot of hurdles to cross … we’ve come to the point where you’ll sign the deeds over to the U.S. government and I as the delegated authority will take them into trust for the tribe and we can move forward from there. I know 2020 has been a trying year, but this is certainly a good way to end it,” Streater said.