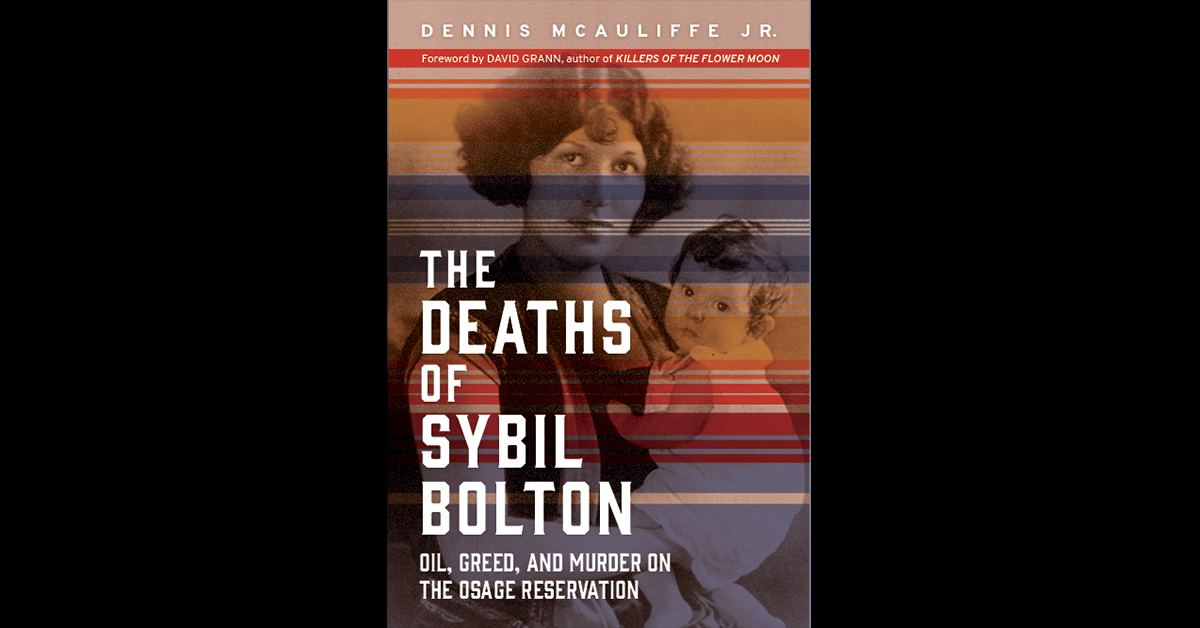 Photo caption: Dennis McAuliffe’s, “The Deaths of Sybil Bolton: Oil, Greed, and Murder on the Osage Reservation,” has been republished with a new cover and a new foreword by author David Grann. Courtesy Photo/Dennis McAuliffe

Sybil Bolton was a young, beautiful, wealthy Osage woman with a new baby when she was found dead in Pawhuska in 1925.

The mystery of her death would haunt her family until her grandson, Dennis McAuliffe, Jr., an award-winning Osage journalist and editor at The Washington Post took it upon himself to investigate.

Through gripping testimony and investigative research, the story that unfolds will stay with you long after the book is read. “The Deaths of Sybil Bolton: Oil, Greed, and Murder on the Osage Reservation,” is a page-turner that will hit home for many Osages, as his descriptive narrative takes you to places in Osage County many will remember. The book also inspired a TATE award-winning one-act play “Four Ways to Die” by playwright David Blakely that premiered in Tulsa in 2018 and was later expanded to a full-length play that premiered in 2019.

The Chicago Review Press has republished the book with a new cover and a new foreword by David Grann, award-winning journalist and author of the bestselling book, “Killers of the Flower Moon: The Osage Murders and the Birth of the FBI.”

“The Deaths of Sybil Bolton: Oil, Greed, and Murder on the Osage Reservation,” will be available in paperback beginning Nov. 10 on Amazon.com for $16.99, and the book became available for Kindle download on Nov. 3 for $11.99.

McAuliffe was also recently sworn in as an alternate to the Osage News Editorial Board.

The following is an excerpt from Grann’s foreword:

“Through his remarkable research and compassion, he has shed an essential light on this past. His exquisitely written account, “The Deaths of Sybil Bolton,” was first published in 1994, and now has thankfully been reprinted in this new edition by the Chicago Review Press. The work contains a moving autobiography along with a true who-done-it. And it serves as powerful testimony—testimony of one of the most sinister crimes in American history, which for too long has been erased from official accounts, like the death of Sybil Bolton. McAuliffe has helped to imbed this history where it belongs—in our conscience.”