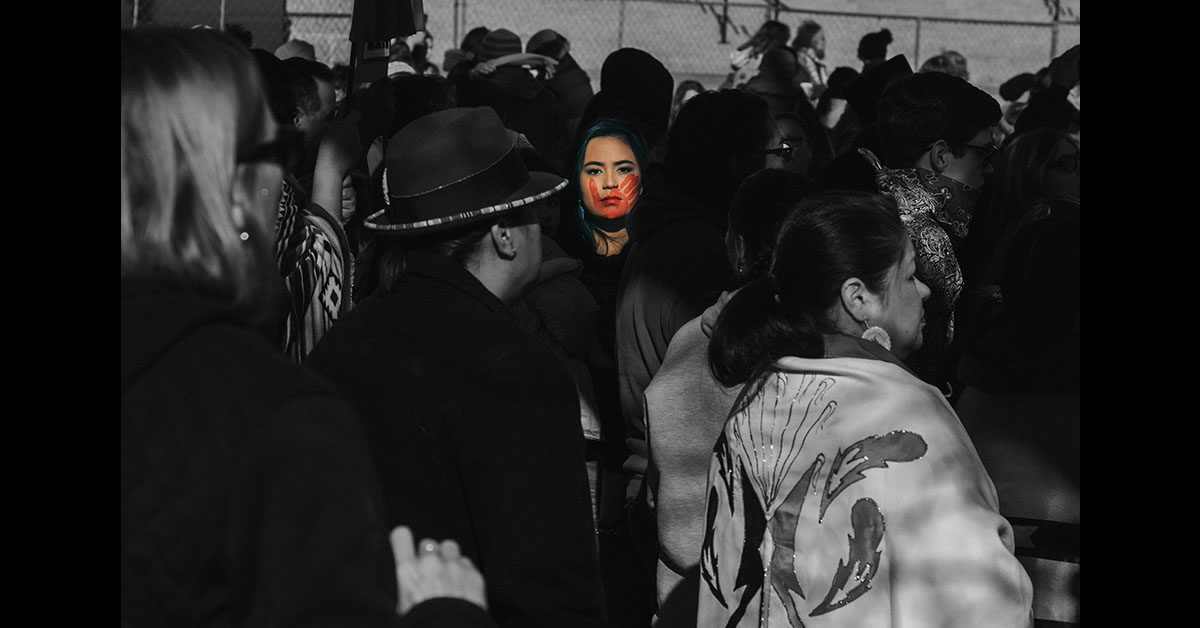 Photo caption: An award-winning photo of Mary Hammer shows her with a red hand across her face, the now recognized symbol for Missing and Murdered Indigenous Women. This photo was taken at the Oklahoma City Women’s March in January 2019. CODY HAMMER/Osage News

Along with representatives from the Muscogee (Creek) and Cherokee nations, the U.S. Attorney’s Offices for the Northern and Eastern districts of Oklahoma announced a pilot program on Nov. 23.

The goal for the Tribal Community Response Plan pilot project is to establish a collaborative response from tribal governments, law enforcement agencies, and other partners by implementing culturally appropriate guidelines when investigating emergent cases of missing and murdered American Indians and Alaska Natives. The U.S. Department of Justice and other federal agencies, including the Bureau of Indian Affairs, developed draft guides for developing a Tribal Community Response Plan in conjunction with tribal leaders, law enforcement and tribal communities.

“These four areas have been identified as key parts to having a comprehensive and engaged response any time we have a case involving a missing persons report for a Native American or Alaska Native,” U.S. Attorney for the Northern District of Oklahoma Trent Shores said. “The idea is to work with tribal leaders, citizens and victims’ families who have experienced a missing person investigation to determine what is working and what isn’t working, what we need to do more of and what those areas are where we need to improve.”

With 65 active MMIP cases, Oklahoma is the first state in the country to launch the program. A 2018 study published by the Seattle Indian Health Board’s Urban Indian Health Institute ranked Oklahoma 10th nationally for the number of cases of missing and murdered Indigenous women, but also acknowledged that due to the dearth of data and uneven reporting practices, the numbers are “likely an undercount.” The study also excluded cases involving missing and murdered Indigenous men and boys.

Similar projects are scheduled to get started in the coming months in Alaska, Michigan, Minnesota, Montana and Oregon.

“An effective strategy to combat violent crime on tribal lands can only be successful with a united front of our law enforcement partners working with the communities we serve,” said FBI Special Agent in Charge Melissa Godbold of the Oklahoma City Field Office. “This program unites all of us in our shared goal of creating a safer community with a focus on solving crimes affecting missing and murdered indigenous people in Oklahoma.”