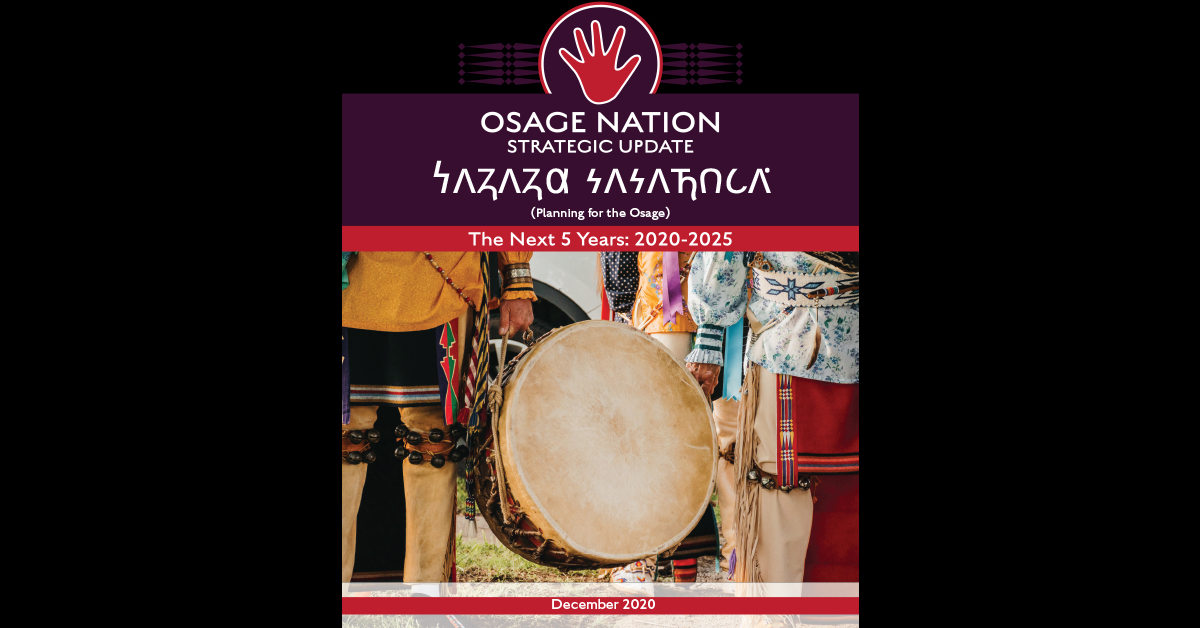 Strategic Plan update will shape policy for next five years

After months of meetings around the country and both online and paper surveys, the results for the Strategic Plan update are in.

The first Strategic Plan survey was administered in 2007 by the administration for then-Principal Chief Jim Gray and was for 25 years. Principal Chief Geoffrey Standing Bear said that more than half of the initiatives from that 25-year plan have been completed. He directed his staff of the Office of Self-Governance and Strategic Planning to conduct an update to guide the Nation for the next five years. The result is a 62-page report, packed full of photos, charts and survey results.

For the Strategic Plan update, 725 eligible tribal members completed the survey. To be eligible, a tribal member had to be over the age of 18 and there were 16,354 eligible members to take the survey. Sixteen group sessions were held across the country, including six webinars, two ON government employee meetings and various online events. The survey was conducted from May 4-May 24 and was administered by the University of Southern California’s Center for Economic and Social Research

“The survey questions were developed through listening sessions input and vetted by Principal Chief Geoffrey Standing Bear, the Office of Self-Governance and Strategic Planning, and the volunteer Strategic Planning Steering Committee,” according to the final report.

Participants ranked the following areas of focus in order from most important to least important.

The report breaks down the data of the participants by state, age and gender. The top five states with participants were:

More than half of the participants felt they benefited from the six areas of focus. More than half also felt the Nation had improved under the initiatives taken from the 2007 Strategic Plan.

Six questions on the survey were dedicated to education.

More than half of the participants wanted the grade point average eligibility for the Osage Nation Higher Education Scholarship increased, as well as awarding scholarship amounts based on GPA. More than half also approved of requiring scholarship recipients to participate in service to the Nation as well as requiring applicants to provide a statement of purpose outlining their intentions for how they will use their degree/credential upon completion of their degree.

Requiring the Nation to develop programs to encourage scholarship students to participate in services after they graduate was a top priority for more than half of respondents.

The area of focus for economic development that got the most approval, according to the plan results, was for the Nation to provide start-up funding and services to establish successful individual Osage-owned businesses. Second, start an Osage-owned financial institution. Third, develop tourism on the reservation. Fourth, explore public-private partnerships by investing in successful existing business enterprises. Fifth, develop manufacturing facilities. Last, develop commercial properties.

The following initiatives respondents would like to see the Nation prioritize. First, increase transparency and communication between the Osage Minerals Council and shareholders. Second, develop Osage-owned businesses relating to the oil industry, such as drilling, refinery, trucking companies, etc. Third, explore the profitability of solid mineral resources, such as sand and gravel, for construction and other uses. Fourth, develop Osage-owned wells as opposed to leasing.

In terms of governance and justice, an overwhelming majority of participants voted in favor of the following: updates from the chief on a regular basis about current issues such as gaming compact, appropriations, economic development opportunities, etc. Second, more accessibility and communication from Congress members with their constituents. Third, review and improve Osage Nation laws on crimes within Osage Nation jurisdiction, and crimes against Osage citizens, including special jurisdiction under the violence against women act. Fourth, allocate more resources to support an independent judiciary, public education about the courts, qualified Osage judges and court-appointed counsel, improved use of technology and access to the Osage Nation. Fifth, focus on increasing voter participation via education and outreach to young adults on social media.

The final report also asked about new areas of communication respondents would like to see, sovereignty, and accessibility to services and programs.

The strategic plan will not be mailed to all constituents, as the survey responses indicated tribal members prefer to receive correspondence electronically, Thomas said. Hard copies of the strategic plan update will be available in January.