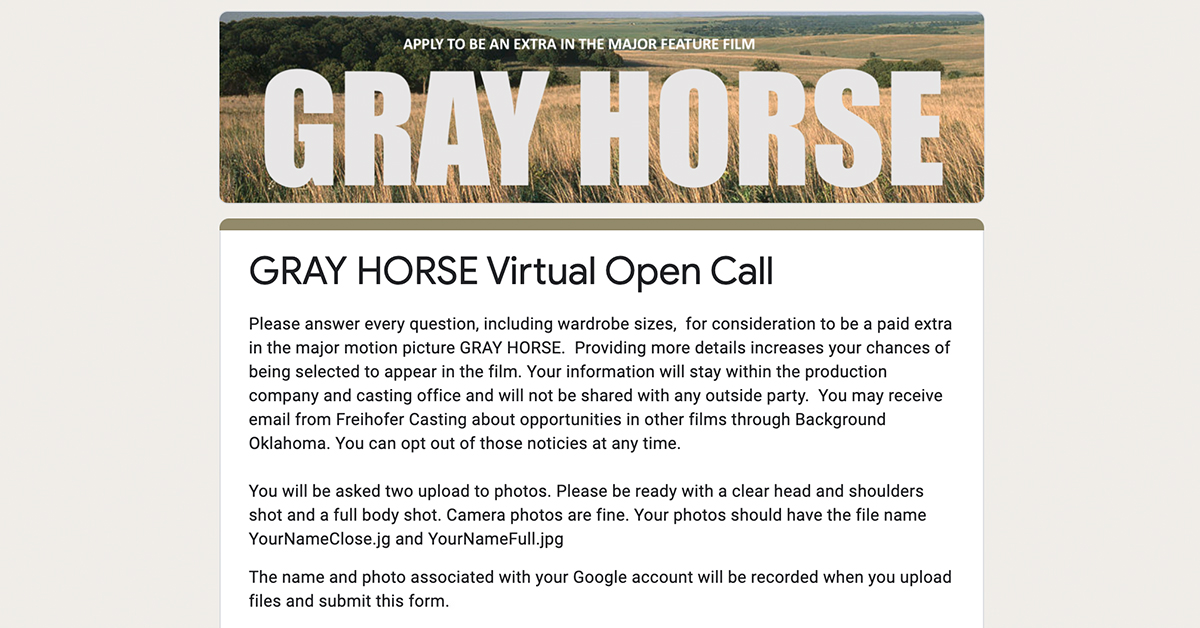 A virtual open call for extras for the upcoming major motion picture Gray Horse was announced on the Oklahoma Film and Music office website on Dec. 21. The open call will be held by Norman-based Freihofer Casting.

According to sources with the film, Gray Horse is the same production as Killers of the Flower Moon. The name of the film has not yet been officially determined or announced. When the public sees the film title Gray Horse, it is still the same film being directed by Martin Scorsese, based on David Grann’s bestselling, “Killers of the Flower Moon: The Osage Murders and the Birth of the FBI.”

The virtual casting call is for all ethnicities over the age of 18. Last year, under the name KFM, the production hosted an in-person open call for members of the Osage community only. If Osages did not have the opportunity to attend last year's open call, they can submit their information virtually. The new open casting call extends the casting to more communities around Oklahoma.

“It’s an easy and fun way to play a part in a film portraying 1920's Oklahoma! While we would normally hold a large open call for extras on this film (as we did last year), current conditions caused us to create a virtual version instead,” according to the announcement. “The virtual open call will consist of simply filling out an online questionnaire and providing the casting office with a little bit of information. If you attended one of the Open Casting Calls last year, you need not re-apply.”

Beginning early next year, the extras casting department will begin reaching out to certain individuals to check availability and start the casting selection process for the earlier scenes in the film's schedule, according to the source. Extras casting will continue throughout filming and the process will be ongoing for several months. Individuals that are not contacted in the first round of communication will continue to be considered for other scenes later in the production's schedule.

The film is scheduled to begin filming in the spring and continue throughout the summer.

In November 2019, Freihofer Casting hosted a two-day open call in Pawhuska at the Osage County fairgrounds and nearly 700 Osages showed up for a chance to be in the film.

The film will star Leonardo DiCaprio and Robert De Niro as two of the main protagonists. The rest of the cast has not been publicly named and it is unknown whether a cast has been selected – although Osages in the area have said they have been called about various roles in the film.

In May, it was announced that Apple Studios will produce the film while Paramount will distribute the film theatrically worldwide.

For more information about the open casting call or to apply as an extra, visit https://okfilmmusic.org/jobs/casting-calls-jobs/virtual-open-call-for-major-feature-film-gray-horse/