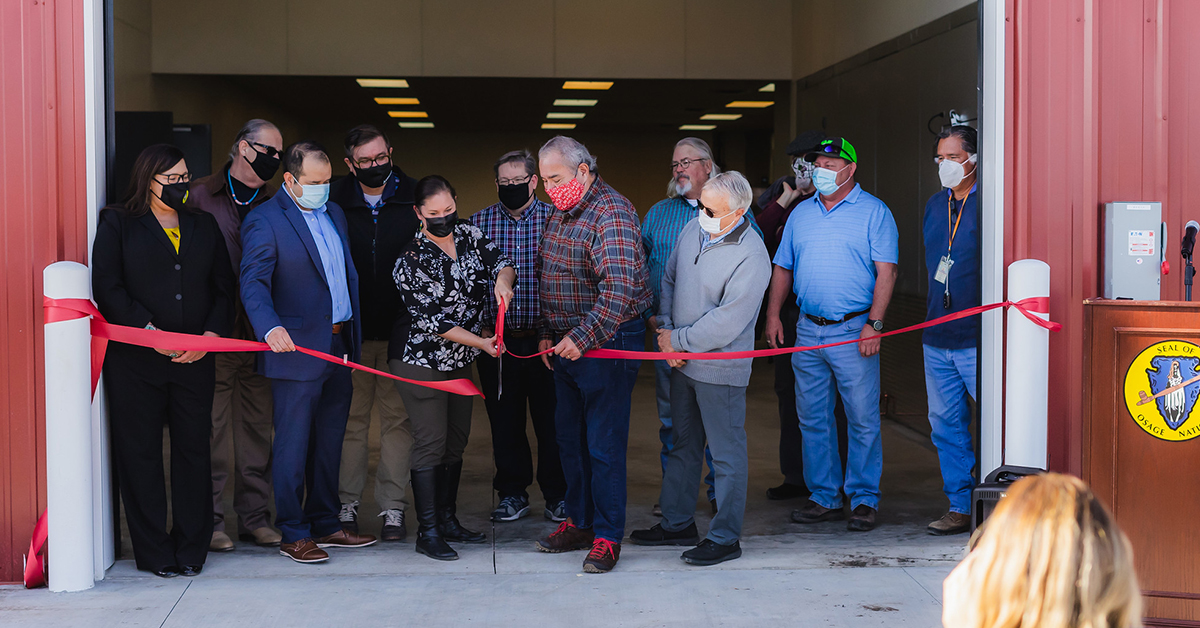 The Osage Nation is starting 2021 with new opportunities to provide locally produced food to its citizens thanks to the opening of two facilities at Harvest Land on Dec. 21 in Pawhuska.

That afternoon, a scattered crowd of Osage government officials and community members attended an outdoor ribbon-cutting ceremony celebrating the completion and opening of the new greenhouse and multipurpose building structures at the Nation-owned Harvest Land previously known as Bird Creek Farms. The Nation received more than $44 million total in federal CARES Act funding in 2020 and used a portion of it to build the two Harvest Land structures.

Located on Nation-owned land south of Bird Creek, Harvest Land now features a 42,000 square-foot greenhouse growing space and a 44,000 square-foot multipurpose building that includes aquaponics and food processing areas. The aquaponics area is already sprouting with a variety of fresh greens and other vegetables to address food security disruption created by the COVID-19 pandemic this year, according to an ON news release.

Principal Chief Geoffrey Standing Bear applauded the talents of those who worked to bring the Harvest Land project to fruition before year’s end.

“Today you will see where we are which is opening some buildings, but we have a long way to go in making it work,” Standing Bear said. “We are confident we are going to make it work because of the people here that are committed, not only at the Harvest Land, but also down at Hominy for our meat processing plant. The commitments are serious and long-term. We look to our Osage Congress for continued support to make sure these are historic buildings with historic activities occurring in them.”

“This is the work of many, many people,” Standing Bear said in acknowledging the architects, engineers and construction crews who worked on the building amid the shorter than usual building timeline. “This is impressive, and it should be, these were built to be impressive,” Standing Bear said. “We thank the United States Congress and President for putting the funds out there for use by the local governments including the Osage Nation. This is money that did not go to the Bureau of Indian Affairs, this money came directly to the Osage Nation and this is proof if the funds bypass the bureaucracy and arrive to us, we know how to use them.”

Congressman Scott BigHorse applauded the work efforts, adding “when COVID first hit, I know that (Standing Bear) formed a task force and before we knew it, there was help flowing in, there was monies flowing in and their staff, Casey (Johnson, director of Executive Branch operations) and all the crew worked tirelessly around the clock to make sure that our Osage people were taken care of” before thanking Standing Bear and Assistant Principal Chief Raymond Red Corn.

BigHorse said he was fascinated by the early aquaponics work efforts which included growing romaine lettuce, cherry tomatoes and other vegetables as well as tilapia when the operations were housed in a smaller former building. “This is a dream come true for me because I have been worried to death for about the past decade about food insecurity,” BigHorse said, adding he’s aware of reports on food deserts where people are having to drive 50-plus miles one-way to buy fresh vegetables and fresh meat.

For the new Harvest Land operations, the news release states: “While greenhouses are a long-established method of providing year-round vegetable production, aquaponics is a relatively new technology that utilizes a closed-loop system to produce both plants and fish. In the Osage facility, tilapia will be produced in conjunction with lettuce and spinach. Water from the fish tanks will be circulated through the plant beds to provide natural fertilizer to stimulate vigorous growth of the lettuce and spinach. The plants effectively filter the nutrients from the water, which is then recirculated to the fish tanks.”

BigHorse noted fresh food is also scarce at times in Pawhuska’s grocery store when “you go through that store and if you’re not there when those doors open by noon, everything’s picked through – all of the better meats and vegetables – so by the time you get off work, you go down there and get what’s left over. I’m just very humbled to be able to stand up here and ... I look forward to the future and again Chief, I thank you from the bottom of my heart.”

Weigant shared highlights of the task force’s performed duties which included seeking requests for proposals for spending the CARES Act funding from all ON government departments, branches and entities after its May 2020 formation. The task force then reviewed the “mountains” of feedback proposing uses for the CARES Act funding, Weigant said, noting “there were four distinct areas that needed assistance with our CARES Act funds ... One area that provided immediate relief is what we call direct response. This included funding for the Wah-Zha-Zhe Health Center, Tribal Works, Emergency Management and individual assistance. This was the bread and butter that provided assistance to countless Osages around the country facing their own COVID hardships,” he said.

Another area includes information technology (internet, wi-fi, ON website improvements), which provided improvements for the Judicial Branch and the Congress/ Legislative Branch to continue their work remotely and virtually for safety reasons due to the pandemic, Weigant said then noted: “The fourth response is why we are here today: food security.”

“Much of Osage County is a food desert and access to fresh vegetables and meat was limited prior to COVID, the pandemic only made this worse with empty shelves and higher prices for groceries,” Weigant said. “This element constructed the (meat) processing plant in Hominy, to purchase cattle and bison and make physical improvements to protect and develop our herd at the Osage Nation Ranch. They also built this great facility today. We now have a year-round farm-to-table food supply chain that is ours and insulated from pandemic-caused breakdowns in other parts of the country – the Osage Nation has taken a major step toward food security, the real reason to celebrate today.”

Hayman, whose department managed the Harvest Land project development, said discussions about improving then-Bird Creek Farms started with a phone call from Standing Bear during the summer “to support our Osage people.” She told him “the biggest challenge that we saw in my office in my department is the inability to provide food year-round, so that was the big goal we had with this facility ... and not just seasonal summer crops.

As construction crews finished work on the neighboring greenhouse structure, Hayman said the multipurpose building will house an aquaponics operation, contains a food processing area for washing and other high-standard preparations before public distribution and consumption. “We’re going to do everything we can to ensure this is a success during our tenure here and for the future so we’re very grateful for this opportunity,” Hayman said of her department staff.

Ross Smith, a project manager for the Nation’s Tribal Development and Land Acquisition Department said the Harvest Land project took 7-8 months which is a short time compared to other building projects that can take more than a year of planning. “With the help of Wallace Engineering and Builders Unlimited Inc. (both in Tulsa), we were able to get this started in a record amount of time and the actual construction of this building was actually four months. We’re proud as the Osage Nation to have a facility like this that will last for generations,” Smith said.

Another ribbon-cutting ceremony is scheduled for Dec. 28 at the Nation’s newly completed meat processing facility in Hominy, which was also constructed thanks to CARES Act funding.