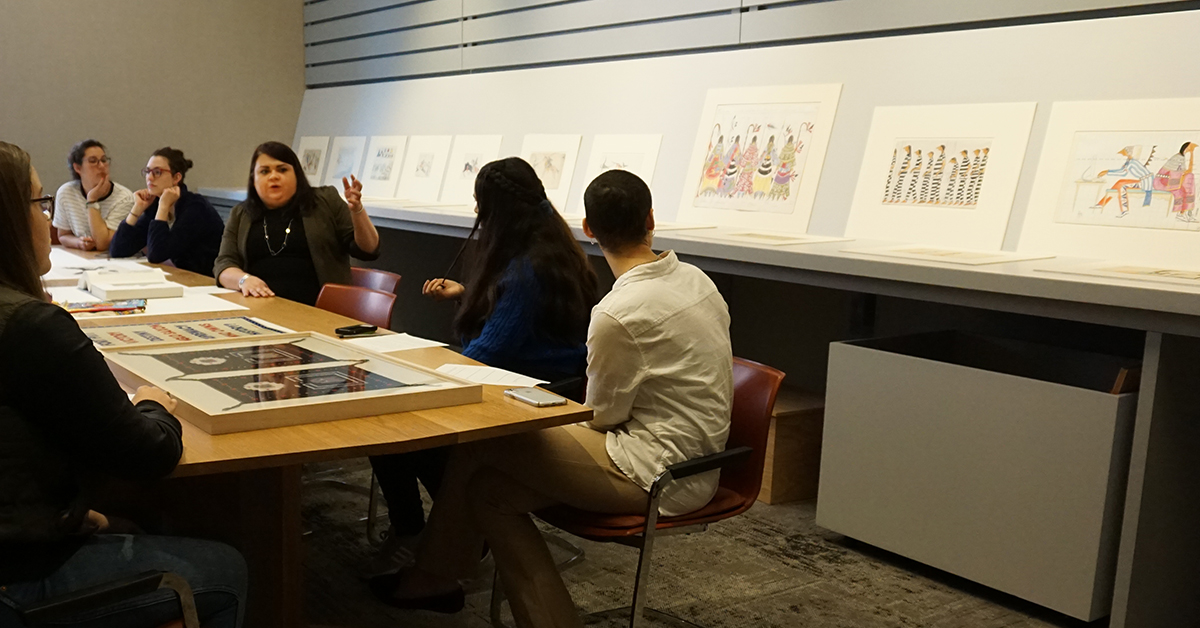 Photo caption: Jami Powell, Osage, who is also a lecturer in the Native American Studies program at Dartmouth, teaches with ledger art from the Hood Museum’s collections. Courtesy Photo

Curator, by its simplest definition, is “to keep” or “take care of.” Art curators are expected to manage a museum's collection, research, select and acquire art works, plan the display and educate, among many other job duties. It’s a profession that, if done well, requires an incredible amount of dedication and passion. Jami Powell, Ph.D., the first associate curator of Native American art at the Hood Museum of Art (Dartmouth College), considers her role to be an extension of who she is, not only what she does.

“I think the most challenging thing about working in museums is that I can’t separate my professional life from my personal life,” says Powell. “My being - an Osage, a mother, a daughter, a granddaughter - is really entangled with my profession, so it hits me differently when I have a hard day at work. But, I think that’s something more people should be doing. To care deeply about what you do is a strength.”

The call for arts institutions to decolonize and act more responsibly with Indigenous art and artifacts has been a decades-long-struggle for Native communities. For Powell, this realization came during a fourth grade field trip to The Field Museum in Chicago.

“Growing up, my father was in the Navy, so we moved around a lot, but traveled back to Oklahoma every summer for the In-Lon-Schka,” she remembers. “But that was something that my friends never got to see and definitely didn’t understand, so I was really excited to show them about my culture during the visit. When we got there, only men were represented and it didn’t include anything current. My peers said things like, ‘you’re not a real Indian because you don’t have long braids’ or ‘you don’t wear Indian clothes.’”

This formative experience ignited Powell’s charge to educate people about Native cultures in ways that are relevant and meaningful within historically colonized spaces like universities and museums. Along the way, she has found inspiration from accomplished Osage women including her great-grandmother, prolific ribbon worker and activist, Georgeann Gray Robinson (Wah-kah-sah) and Jean M. Dennison, who was an assistant professor of anthropology at the University of North Carolina at Chapel Hill and served as Powell’s Ph.D. advisor. Powell credits most of her success, however, to her children: “I have transformed since I’ve become a mother. The empathy and patience that I’ve learned from being a mom is something that’s incredibly useful to me in my professional life.”

Powell is part of a growing and tight knit community of Native American curators that are breaking barriers in cultural institutions across the country. In September, the Metropolitan Museum of Art hired its first full-time Native American Curator Patricia Marroquin Norby (Purépecha Indigenous Mexican) as the associate curator of Native American art. This is a departure from museums historically using tribal leaders as temporary “cultural consultants.” Powell believes this shift in museum culture is critical.

“I am not the only one working professionally today, nor was I the first,” says Powell. “In fact, I wasn't even the first in my family to work in the museum field. My Aunt Kathryn [Redcorn] and Aunt Jan [Jacobs] as well as my cousins Marla [Redcorn-Miller] and Genevieve [Simermeyer] were working in the field long before me. They are part of the reason I'm able to do this work today. And we should be in charge of what happens in these spaces. I want to support museums in ceding authority and creating spaces for conversations with tribal communities.”

Like many events interrupted in 2020, Powell’s most recent exhibition Form and Relation: Contemporary Native Ceramics at The Hood Museum of Art, has an opening date that is to be determined. The exhibition is in response to Powell’s observation that most Native ceramics on display are either historic works or heavily focused on the southwest region of what is now the United States. The six geographically diverse Indigenous artists in the group show are Anita Fields, Courtney M. Leonard, Cannupa Hanska Luger, Ruben Olguin, Rose B. Simpson, and Roxanne Swentzell. The show description notes that each artist “wrestles with concepts such as community, identity, gender, land, extraction, language, and responsibility.” Though not open to the public due to COVID-19, The Hood Museum is launching an interactive online viewing room on the museum’s website: hoodmuseum.dartmouth.edu.

Powell currently has two big projects in-the-works. One project This Land: American Engagement with the Natural World, opening January 2022, centers around American art and who has historically been included in that conversation. The other project is Madayin: Eight Decades of Aboriginal Bark Painting from Yirrkala, opening August 2022, which underlines the exemplary artistic production of the Yolngu of the community in northern Australia.

Although the content is always shifting, there is a consistent thread throughout Powell’s work that has remained steadfast since her fourth grade field trip years ago.

“A lot of my curatorial vision is about providing access, resources and space for Indigenous community members to tell their own stories,” says Powell. “Especially for those who haven’t yet had an opportunity to tell theirs.”