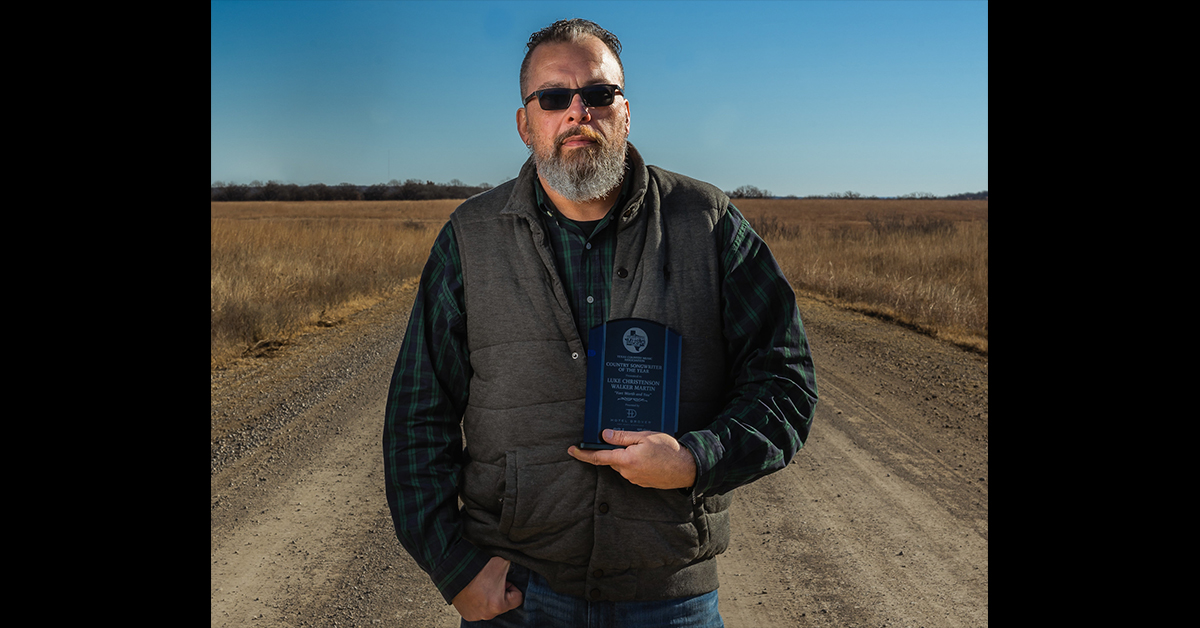 Osage songwriter Walker Martin, along with singer/songwriter Luke Christenson, took home the Country Songwriter of the Year award from the Texas Country Music Association for their song "Fort Worth and You."

The awards were held at the Fort Worth Stockyards at Billy Bob’s Texas in September. Martin is the first Osage tribal member to win the award from the TCMA.

Martin, 50, was born and raised in Pawhuska. He currently lives in Bartlesville where he does most of his work and songwriting. He’s a father to six children, a grandfather to three grandchildren and he’s a U.S. Army Veteran who saw combat in Desert Storm.

He’s from the Pawhuska District and his Osage name is Hu-Tha Zhu-Tse, Red Eagle.

He sat down with Osage News to talk about his songwriting career, where he gets his inspiration and what’s next for him.

Osage News: How long have you been writing songs?

Walker Martin: I have been writing songs since 1993. I wrote my first actual song when I was in the Army. I’ve been writing poetry since the 5th grade and again when I entered high school.

News: What inspires you when you write your music? What’s the most inspirational for you?

Martin: Depends on if it’s something I say or something that catches. Then the hook, and it gets in my head and builds. I’ll build a song backwards from the last line of the chorus and put everything around it. Once I have a concept in my head its easy, it’s like painting a picture.

News: What did it feel like to win Country Songwriter of the Year from the TMCA?

Martin: Crazy! It was surreal at first and I couldn’t believe it. We were just a couple of guys from Pawhuska, Oklahoma.

News: Did you guys nominate your song or did somebody else?

Martin: Luke Christenson entered it for consideration. There were over a thousand songs entered and we got contacted several months back and was told we were in the top 10. I thought that was a great honor – it was pretty satisfying to win.

News: What was your process and experience like co-writing the song “Fort Worth and You”?

Martin: For “Fort Worth and You” I was on the porch and Luke called and said he had an idea. They had been driving back and forth from Minnesota and Fort Worth, Texas, working pipeline and recording records. He called and said it was a promise he had made to his wife. He told her that if it ever got too much that he would shut it all down and turn around and go home. He had the first verse and chorus, and I came in with a verse I wrote in less than 5 minutes. When it’s flowing it comes out easy. This song was written last year.

News: Is there somewhere we can hear the song?

News: Have you won other awards or is this the first?

Martin: This is the first one with recognition, plus it’s the first time we tried. These Oklahoma boys rode down there and rode home with it.

News: So, what’s next? Are you currently writing now?

Martin: I’m always writing. The whole sound we have is different, I’ve coined the phrase “The Scissortail Sound.”

News: What have you learned from the process?

Martin: I’m straight creative, I don’t know the business side but I am learning from that. Just seeing how it works.

News: What advice would you give aspiring writers?

Martin: Keep moving forward, don’t give up on your dreams. You can put it on pause, but can’t stop.