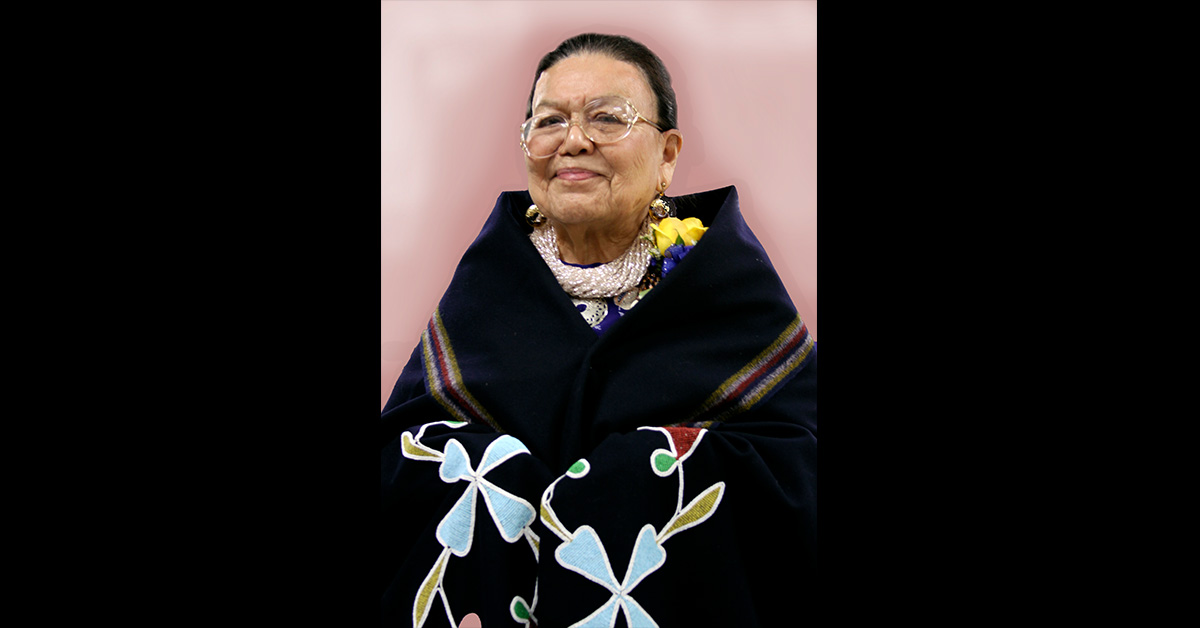 Mildred A. Lunsford, 88, moved on to heaven into God’s arms from her home in Fairfax, Oklahoma, Monday morning on March 1, 2021, with her loving family by her side.

She was born in Fairfax on Saturday, Dec. 31, 1932, the oldest daughter of five children to parents Helen (Morton) Bear and Billy Bear. She was the granddaughter of the late Oliver and Millie (Che-Sho-Wah-Kepah) Morton and Samuel and Alice Bear. Affectionately known as “Midge” she was Osage (Grayhorse District) and Creek. Midge felt honored to serve as the 1949-1950 Osage Tribal Princess. She had often said she had so much fun in the parade at Anadarko.

Midge was raised on a farm west of Fairfax and attended Fairfax Schools for her early education. She often reminisced how she loved taking care of her baby lambs, watching them play and prance around. On Sundays, she would ride a horse up to the cattle guard to get a ride to town with two ladies for church. She was the only child one year at First Osage Baptist Church to have perfect attendance. Midge was baptized on Sunday, Dec. 5, 1943. As a teenager of 13, Midge started work flipping burgers at the “Grill.” She left Fairfax to attend her High School years at Chilocco Indian School in Kay County, Oklahoma and graduated there.

During this time, she met a young Creek boy, Marvin Lunsford, who caught her attention. In 1953 on Saint Patrick’s Day the young sweethearts were married in Okmulgee. They soon moved to Fort Hood, Texas, where Marvin served his country until May 1961. They were blessed with six children, Teddy, Cidney, Jeffery, Jonathan, Tracey, and Helen. They lived in Bell, California, for over 40 years.

After caring for her family, Midge returned to school; received her training; and was employed for 25 years as a licensed LPN at St. Francis Hospital in California. Following retirement, the couple returned to Fairfax in 2003. They shared 56 years of marriage before Marvin’s passing in May 2009.

Midge started dancing at the Inlonshka dances at age 9. She said there were not many dancers then compared to the big string of dancers nowadays! She liked seeing everyone gathering for visiting and eating. Watching the dances gave her great enjoyment. Her favorite Osage foods were meat gravy, frybread, and squash.

Midge loved her Lord and attended church her entire life. Her home church was the First Osage Baptist Church. Midge could be found there on Sunday and Wednesday nights. She participated in the WMU (Women’s Missionary Union); Vacation Bible School; and she found pleasure in decorating for ALL the holidays, sharing her talent for decorating at the Fairfax Senior Citizens as well. She was a board member of the Fairfax Senior Citizens and enjoyed daily lunches both there and more recently at the Osage Nation Elder Nutrition site. Midge belonged to the ladies Pah-Su-Lee club and Grayhorse War Mothers Chapter 15.

Through the years, she made lifelong friends who became family and kept in touch with them, by phone, sending cards, and sharing stories of her Savior and Lord. Her favorite past times were shopping with friends at Kohls and eating out. Her heroes were Billy Graham, John F. Kennedy, and Elvis whom she saw in concert in Tulsa. She always had a smile, a heart of gold, and was thankful for her children who were the pride and joy of her life. She was especially thankful for her mother Helen, who helped her all her life and was always there for her.

Memorial contributions may be sent in memory of Midge to First Osage Baptist Church, 236 S Main, Fairfax, OK 74637.  The family would like to thank Jessica Green, the nurses from Angels, and the team at Hospice of North Central Oklahoma for the loving care they gave Midge.

A funeral service was held on March 4 at the First Osage Baptist Church in Fairfax.