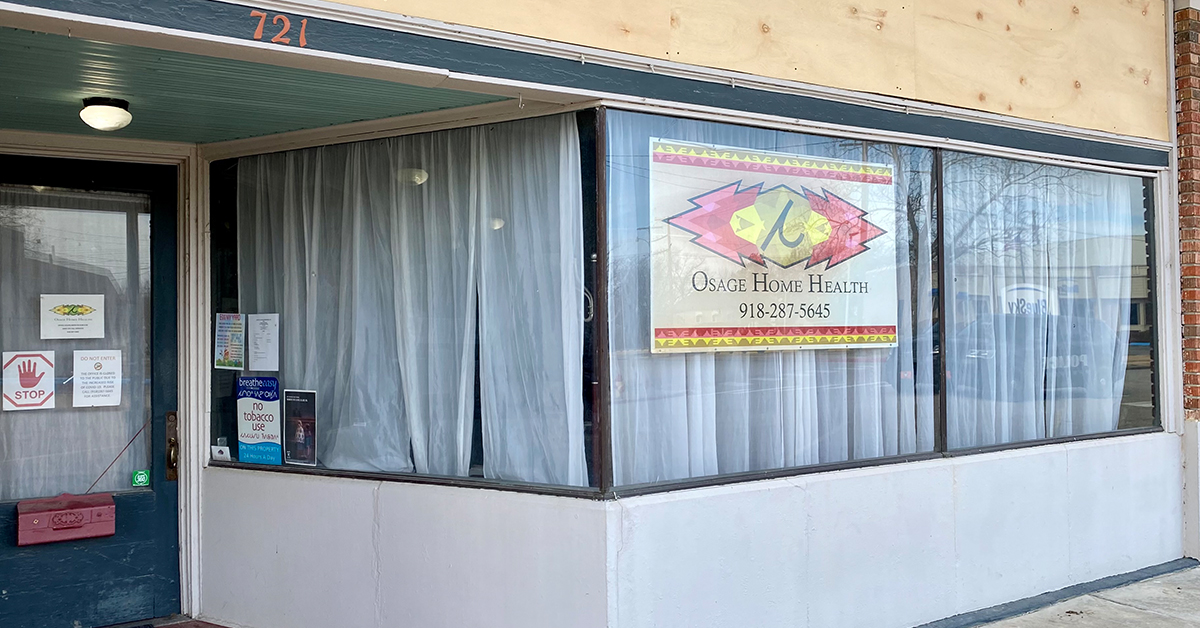 Osage Home Health relocates to ON Civic Center after eviction

Photo caption: Osage Home Health was located at 721 Kihekah in Pawhuska for over five years until recently evicted. They are now located in the Osage Nation Civic Center. SHANNON SHAW DUTY/Osage News

Nikki Revard Lorenzo, Osage Home Health board member, told the Osage Congressional Commerce, Gaming and Land Committee on Jan. 20, that the eight-person staff received an eviction letter on Jan. 4 from Osage Square Property landlord Scott Trotter. They were being evicted from 721 Kihekah in downtown Pawhuska “due to a pivot” in his overall business plan, according to the letter.

The building is part of the two city blocks being used to film the upcoming Martin Scorsese film, “Killers of the Flower Moon.” Filming is set to begin in April and business owners along Kihekah Avenue were told filming would take place in May.

Osage Home Health has been located on Kihekah for over five years and paid rent at $700 per month. Now, they will pay space costs to the Nation. OHH provides patient services with funds received from Medicare and private insurance without requesting appropriations from the ON Congress.

The staff currently serves 41 patients, with approximately 60 percent of those patients being enrolled Osage tribal members, Lorenzo said. OHH has three full-time registered nurses and one LPN. Part-time staff includes one LPN, two aides, and one clerical worker, who is a retired nurse. Lorenzo also added that no staff members have contracted COVID-19 from any of their patients and all staff has been vaccinated. They are currently advertising for an RN clinical supervisor.

Lack of office space has been an ongoing challenge for the Osage Nation’s departmental entities. Lorenzo said when they notified the Nation they were being evicted, she was told they would be in competition with two other departments who needed office space as well.

OHH is an entity of Osage Nation Enterprise, Inc., and strives to provide comprehensive health care and health education to Osages and community residents within a 70-mile radius of Pawhuska.