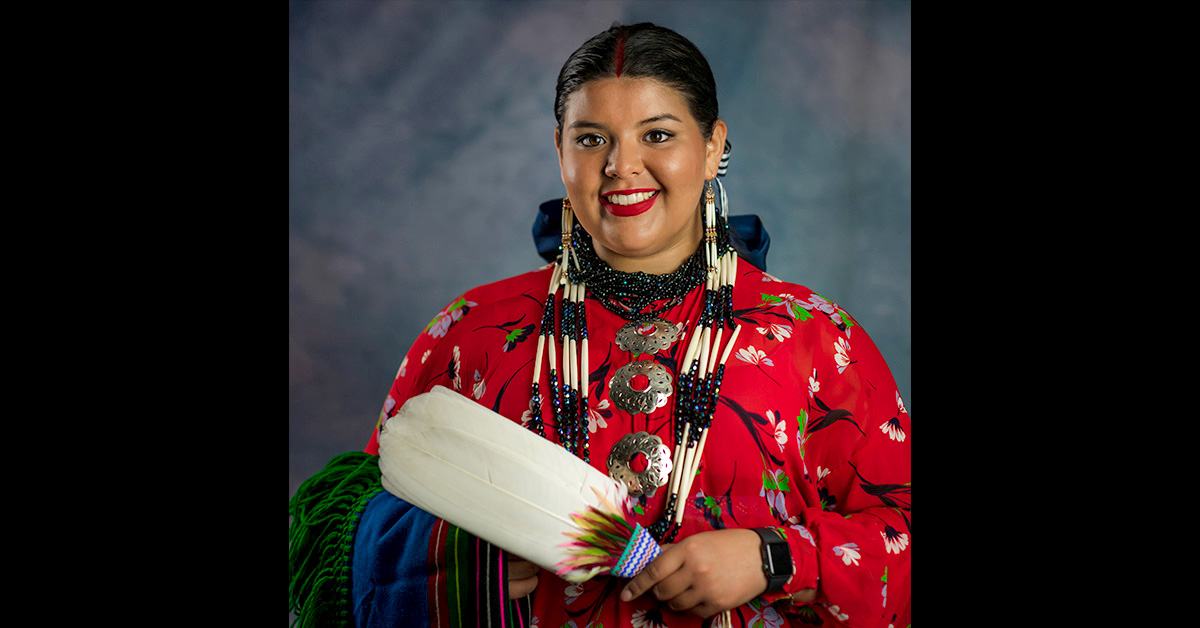 Gianna “Gigi” Sieke of the Grayhorse District has been selected as the 2021-2022 Osage Nation Princess.

“Gianna is such an outstanding young lady. She has such a big heart and a beautiful personality. I know that she is going to be a great role model for our younger Osage generation,” said Osage Tribal Director Chalene Toehay-Tartsah. “The most important thing a girl can wear is her confidence, and I know she has that. I believe that she will represent our nation to the best of her ability.”

Gianna, 15, is culturally grounded in traditional Osage teachings, said her mother Janese (Lasley) Sieke. She attends Osage language classes and loves to visit with elders. She participates at Inlonshka, Grayhorse War Mothers, and various social dances. She is quick to help set and clear tables, and with guidance from her aunt Margie Williams she is learning more and more ways to cook traditional Osage dishes.

Her sports activities include Cross Country, the inaugural Lady Huskies Powerlifting Team, varsity soccer and varsity track. She also enjoys running in 5k races and she can be often seen running around the Osage Campus. She is a published Broadway Critic with George Takei’s Second Nexus-Teens Take Broadway. She has seen over 20 Broadway productions and has been published four times. Her reviews on “Head Over Heels,” “The Cher Show,” “King Kong,” and the Tony Award sweeping “Jagged Little Pill,” have been published.

“She has such a bright smile and that’s what I love about her. Her parents and her family did an excellent job with her,” Toehay-Tartsah said. “I had spoken with Janese and asked her if Gianna would be interested in being our next Osage Nation Princess. Her mother was overjoyed when I spoke to her. I could hear it in her voice.”

Gianna spent her younger years growing up in New Jersey and moved to Pawhuska a few years ago. Sieke said it gave Gianna perspective on how huge and amazing the world is.

“She has enjoyed city life and also reservation life. Both worlds are what molded her into the talented and charismatic lady that she is today,” Sieke said. “Gigi would love to express her gratitude for being chosen as the next Osage Princess, an ambassador for the Osage Nation. She is extremely honored and would love to thank Kihekah (Chief) Standing Bear, Mrs. Chalene Toehay-Tartsah, and all her family and friends for the ongoing support. May Wakanda continue to bless the WahZhaZhe people, our sovereignty, language, and our next generations.”

Gianna is the daughter of Eric and Janese Sieke. Granddaughter of Raymond Lasley II and the late Gloria (Blanchard) Lasley. John Sieke. Robert and Susan (Milbauer) Walters. She would also love to acknowledge her Great Uncle Matthew and Aunt Ellen (Sieke) Prusecki.

The first Osage Tribal Princess was Margaret Luttrell Gray, who served in 1941. Since 1941, an Osage Princess has represented the Osage Nation every year at the week-long American Indian Exposition, held every year in August in Anadarko, Okla. The Osage Nation Princess will join other tribal princesses from more than 10 different tribal nations at the Exposition. They participate in banquets, fashion shows, are featured in parades, pageants, and are asked to give speeches about their tribal nations at various events.

Last year’s exposition was canceled due to the COVID-19 pandemic. It has not been announced where an exposition will be held this year.

Once the princess has served for a year, she becomes a member of the Osage Tribal Princess Sorority for life. She receives a shawl with her name and year of reign. The OTPS currently has more than 15 active members and they hold an annual honor dance. Last year’s honor dance was canceled due to the pandemic.

“Many of our young Native women look up to their tribal princess,” Toehay-Tartsah said. “It’s a big honor.”