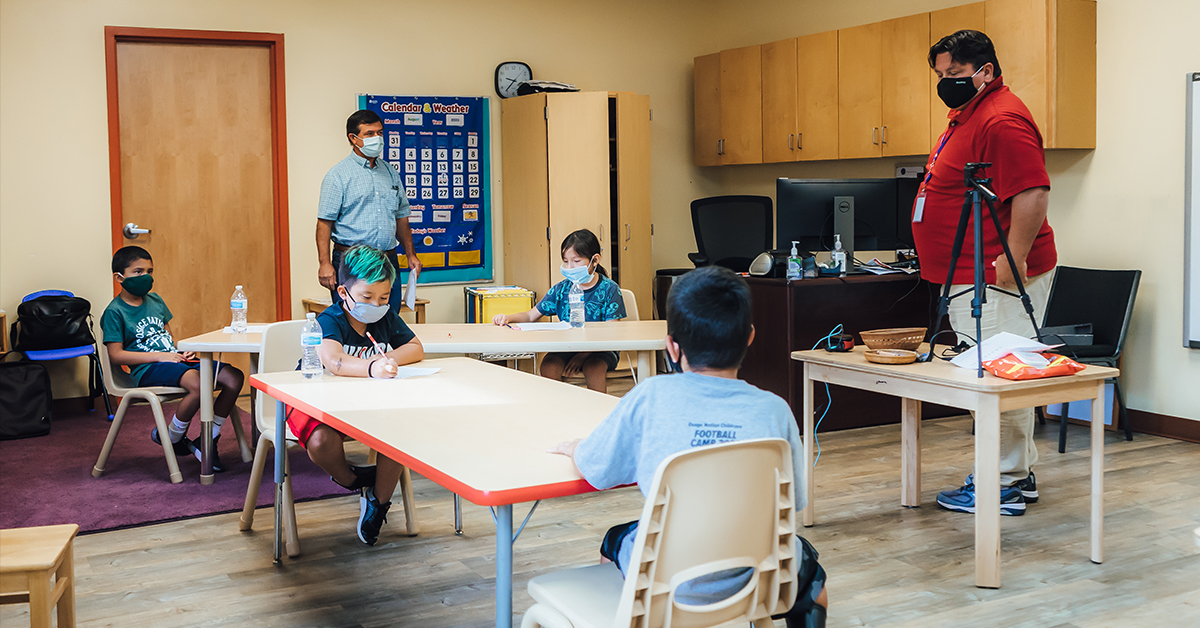 Due to the ongoing COVID-19 pandemic the Cognia accreditation team, formerly AdvancED, conducted the visit virtually. Jim Ferrell, an assistant professor in the College of Education at Northeastern State University and former principal of Caney Valley Schools, led the team. Joining him was Jean Harper, a 4th grade teacher at a small Catholic school in Omaha, Neb., and Rowlena Hartman, who is a behavior analyst at a small school for children with autism in Ardmore.

Daposka Ahnkodapi Superintendent Patrick Martin, who has served on accreditation teams with Ferrell before, said he felt the visit went very well and the Nation should know the status of the school’s accreditation sometime in April.

“They want to see fire drills, fire marshal reports, school menus, they want to see everything,” Martin said. “Normally, you put all this evidence that supports the school, like the handbook, employee handbook, files, teacher files, report cards, yearbook, in a room and the team reviews it. But with the pandemic, we had to send all of those files electronically.”

According to the Cognia website, the accreditation process is based on a set of rigorous research-based standards and evidence-based criteria. “The accreditation process examines the whole institution - its policies, programs, practices, learning conditions, and cultural context - to determine how well the parts work together to carry out the institution’s vision and meet the needs of every learner.”

Accreditation as a private school would potentially make the school eligible to participate in two state-run scholarship programs: the Lindsey Nicole Henry Scholarship, which provides tuition scholarships for disabled students who have an individualized education plan, and the Oklahoma Equal Opportunity Education Scholarship, which is a tax credit scholarship program for families with an income of up to 300 percent of the eligibility limit for free or reduced-price school meals.

The school, which added a fourth-grade class last year, currently has 27 enrolled students in Pre-K through 4th grade, with no more than seven students per grade. Currently, no students are on the waiting list and the school currently has enough space to add a fifth-grade class next year.

Amy Shackelford, who has three children attending Daposka Ahnkodapi said the school has been a welcomed learning institution for her children and family.

“My favorite element of the school is the sense of family and community with the other parents, their children and the school staff. The added emphasis of Osage language and culture is a bonus for my family,” Shackelford said. “My children love their school and can’t wait for school every day.”

Principal Chief Geoffrey Standing Bear, who was also interviewed for the site visit, said he feels very encouraged by the interviews.

“Once the school is accredited, the next phase of its evolution will be how do we set it up to be independent and set it off on its own,” he said. “Is the chief going to appoint a school board and the Congress confirms them? Is there going to be elections for a school board? We don’t know yet. We have 22,000 Osages and less than 5,000 of those live within our Osage boundaries, so we don’t know the answer to that yet.”

“But we have to nurture the school, make it strong before we set it off.”

Martin said when he came on staff in 2019, the school was in a precarious position. His first few months on the job he had three teachers quit and families left the school. There wasn’t any data to show the student’s academic progress, but the remaining teachers banded together.

“After that, we got new teachers in place, and it was amazing because they were already here. We had Erika (Cole), Melissa (Kizziar), Frankie (Hammer), and Destinee (Lookout) come on, it was like the storm was over and the rainbow came out,” he said. “And we’ve been working ever since. We’ve been working as a team, and that’s what I’ve emphasized to the teachers that we’re a team.”

Martin said the addition of Denise Keene, the former ON Head Start director, has had a positive impact on the school as she works with the Pre-K and Kindergarten students.

Standing Bear said he feels really good about where the school is headed.

“What can we do to support the school? How do we build around today and for the future? Well, you build around the children,” Standing Bear said. “So, everything here has to have that focus. That’s what I’ve tried to do for seven years. I’m feeling really good.”