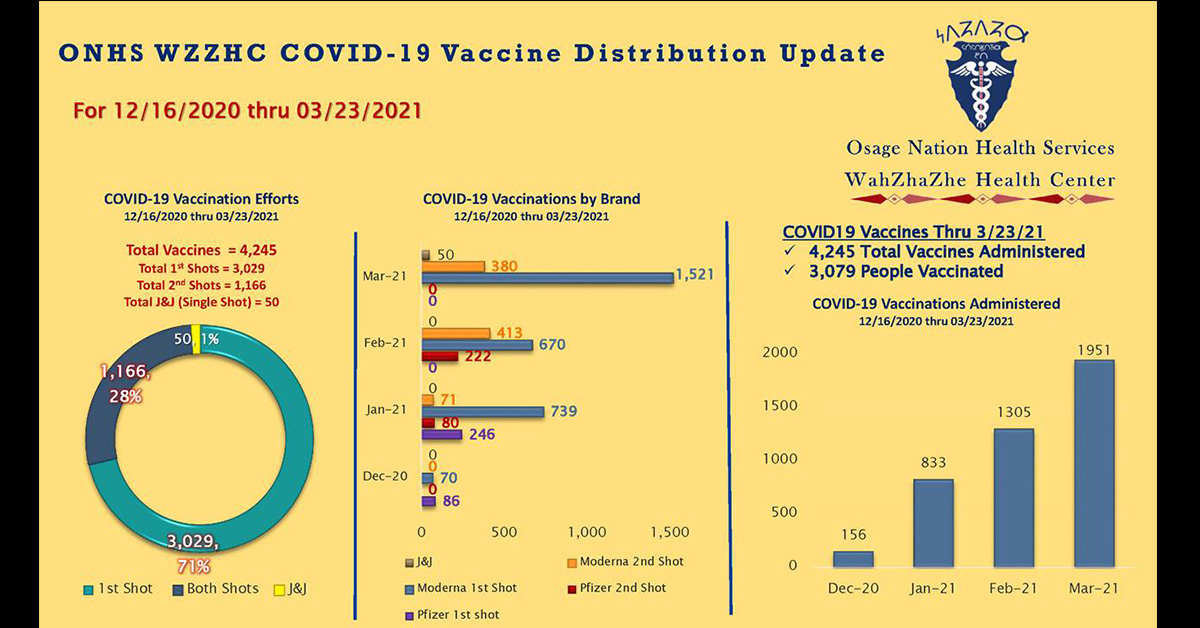 As of March 23, the Osage Nation Health Services Wah-Zha-Zhe Health Center reports a total of 4,245 total COVID-19 vaccines have been administered and 3,079 people received the vaccine shots.

The most recent report comes as the WZZHC opened its COVID-19 vaccine eligibility requirements to all individuals over age 18 as of March 11. The report also comes after the WZZHC hosted two inaugural back-to-back vaccine events on March 22 at the Hominy and Grayhorse village community buildings.

The vaccine totals in the report cover the past 3.5 months since the vaccine availability started after the FDA issued Emergency Use Authorizations to vaccine makers Pfizer-BioNTech and Moderna in December 2020 for their respective two-dose vaccines. On Feb. 27, the FDA also granted a EUA to Johnson & Johnson for its single-dose vaccine shot.

The WZZHC has administered the vaccines from both Pfizer-BioNTech and Moderna and has started receiving limited supplies of the Johnson & Johnson vaccine.

On March 27, the WZZHC held a second vaccine event at the Tulsa Osage Hotel Casino where a limited supply of 250 Johnson & Johnson vaccines were available on a first-come, first-serve basis. Other individuals that day received the Moderna vaccine, which has a recommended second vaccine dose 28 days after the initial shot.

According to CNN, “the overall global efficacy of Johnson's vaccine was 66% against moderate to severe illness. But it was 85% effective against severe disease and, in trials anyway, 100% effective at preventing death, as no one who got the vaccine died from Covid-19.”

In a PBS News Hour story, the Johnson & Johnson vaccine is described as a “viral vector vaccine. To create this vaccine, the Johnson & Johnson team took a harmless adenovirus – the viral vector – and replaced a small piece of its genetic instructions with coronavirus genes for the SARS-CoV-2 spike protein. After this modified adenovirus is injected into someone’s arm, it enters the person’s cells. The cells then read the genetic instructions needed to make the spike protein and the vaccinated cells make and present the spike protein on their own surface. The person’s immune system then notices these foreign proteins and makes antibodies against them that will protect the person if they are ever exposed to SARS-CoV-2 in the future. The adenovirus vector vaccine is safe because the adenovirus can’t replicate in human cells or cause disease, and the SARS-CoV-2 spike protein can’t cause COVID–19 without the rest of the coronavirus.”

March represents the busiest month for vaccine efforts, which Is when eligibility criteria opened to all individuals 18 and older to receive the vaccine. March and February are also months when the WZZHC started carrying only Moderna and the Johnson & Johnson vaccines and stopped carrying the Pfizer vaccine.

In a monthly breakdown on the two-dose vaccinations, the WZZHC reports:

- 86 Pfizer vaccines and 70 Moderna vaccines were administered in December 2020.

For any further questions or information on the vaccine events, individuals can reach the WZZHC COVID-19 Vaccine Hotline at (918) 287-0076.