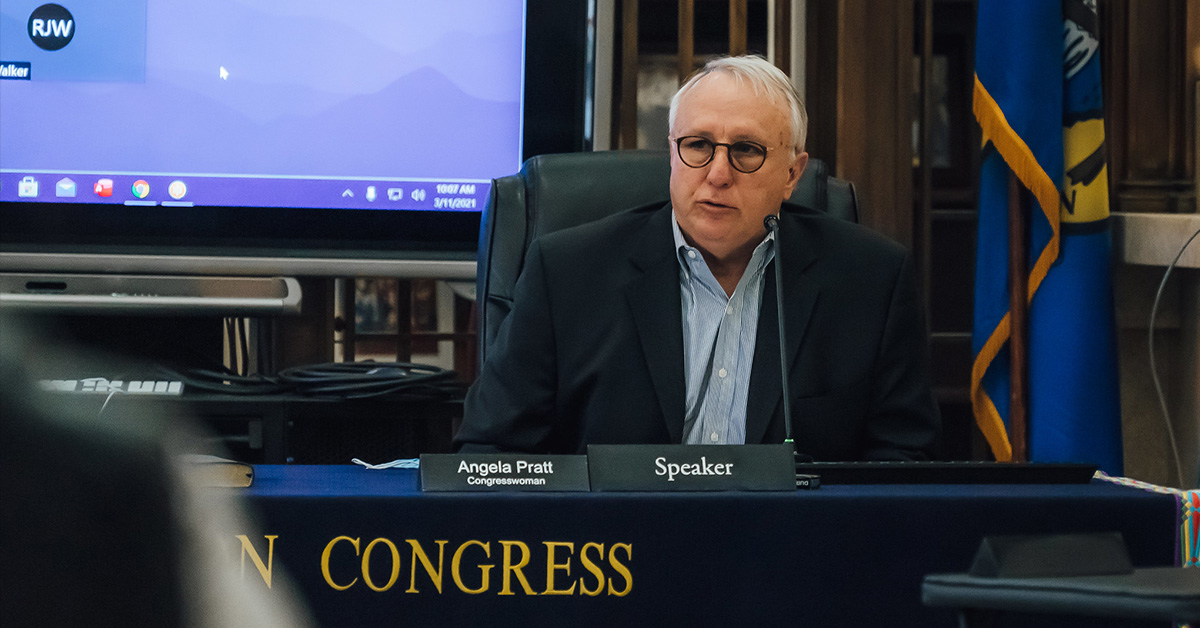 During a March 11 single-day special session, the Seventh Osage Nation Congress approved three legislative items including a $74,000 appropriation to provide an intergovernmental grant to the Pawhuska Public Works Authority for water equipment improvements.

The Congress unanimously passed bill ONCA 21-16 (sponsored by Congressman Billy Keene) to provide the $74,000 to the public works authority for facility improvements serving those who reside in Rural Water District 21. Assistant Principal Chief Raymond Red Corn said the funding would go toward “engineering work and installing equipment to make viable a rural water district that Pawhuska sells water to west of town … from which several Osages get their water.”

Red Corn delivered the brief executive message during the session after Principal Chief Geoffrey Standing Bear announced he has a conflict of interest regarding the bill. Standing Bear lives in the impacted water district and did not attend the session.

“I declare that I do have a conflict of interest on (ONCA 21-16) because I am a potential beneficiary of (the special session proclamation item). I am therefore unavailable as Principal Chief for that action,” Standing Bear said in a Feb. 24 executive memorandum.

Residents of the rural water district went without water for two weeks during the inclement weather temperatures that struck much of Oklahoma in mid-February. With the storm came snow and record freezing temperatures that damaged the water system for those living in the area.

Keene sponsored the bill after hearing from Osage families impacted by water shortage issues for years, as well as hearing the bill’s justification from Casey Johnson, Executive Branch Director of Operations, who noted the Congress previously provided a $50,000 intergovernmental grant to the City of Wynona for water treatment and facility improvements when they passed bill ONCA 19-03 in 2018.

“The appropriation to the City of Pawhuska Public Works Authority will benefit the western end of Pawhuska by providing city water to approximately 42 water meters that are currently on undependable rural water lines,” Johnson said in a memo. “Since the last winter storm, some of these households have been without water for about two weeks. There are approximately 25 Osages that will be served directly by this line providing quality drinking water as well as everything else a household utilizes water for.”

Keene said: “We can listen to the tribal citizens' concerns and if we have the means to help, I think it’s a good idea … I think it’s a good endeavor and that’s why I sponsored the bill.” The $74,000 appropriation will come out of the Nation’s general fund and is based on a quote from Ward Engineering, which is working on the project.

ONCA 21-16 passed 12-0 and Red Corn signed the bill on behalf of the Executive Branch afterward.

Revard said she supports the two entities, including the newly opened meat processing plant, adding “this is another way we become progressive as a Nation in preserving things that are critical, cultural and of importance to us, as well as providing the basic need of having the ability to purchase and butcher our own meat as a Nation.”

The bill passed 12-0 and the Congress later voted 9-3 on a revised FY 2021 projected revenue resolution (ONCR 21-02 also sponsored by Revard) to reflect the changes made in the budget by ONCA 21-17. The legislations’ passage came after a Congressional Appropriations Committee meeting during the session for initial review and consideration of the three items.

Copies of filed legislative bills and resolutions, as well as Congressional meeting notices and agendas for sessions are posted online to the Legislative Branch website at: https://www.osagenation-nsn.gov/who-we-are/legislative-branch