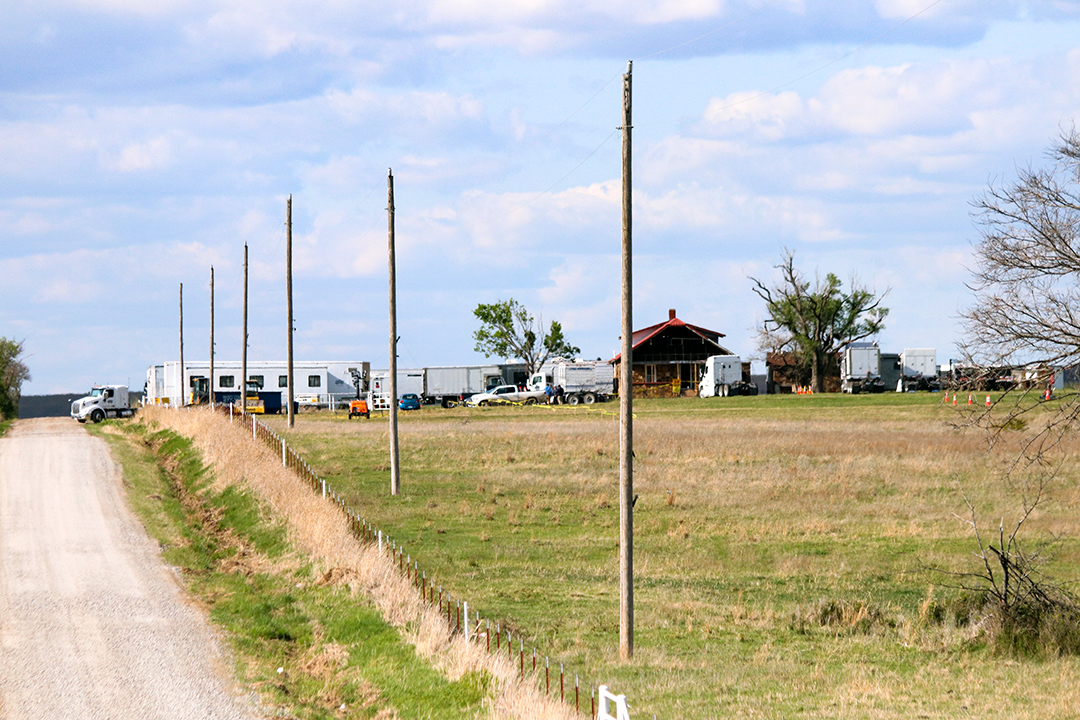 Photo caption: The first day of filming was announced April 19 by The Oklahoma Film + Music Office (OF+MO) and Apple Original Films. Pictured is a home in the Grayhorse area surrounded by trailers on one of the film’s sets. SHANNON SHAW DUTY/Osage News

The first day of filming was announced Monday by The Oklahoma Film + Music Office (OF+MO) and Apple Original Films. The film is based on David Grann’s bestselling book of the same name and details the federal investigation into the “Osage Reign of Terror,” a period of time during the 1920s when wealthy Osage tribal members were systematically murdered for their inheritance.

“We are thrilled to finally start production on 'Killers of the Flower Moon' in Oklahoma,” said Scorsese in a prepared release. “To be able to tell this story on the land where these events took place is incredibly important and critical to allowing us to portray an accurate depiction of the time and people. We’re grateful to Apple, the Oklahoma Film and Music Office and the Osage Nation, especially all our Osage consultants and cultural advisors, as we prepare for this shoot. We’re excited to start working with our local cast and crew to bring this story to life on screen and immortalize a time in American history that should not be forgotten.”

According to the release, Gov. Kevin Stitt, Lt. Gov. Matt Pinnell and the OF+MO worked to ensure historically accurate Oklahoma locations for the film. Pinnell said the film is having a positive impact on rural communities and small businesses. According to Visit Bartlesville Executive Director Maria Gus, who told The Oklahoman, early economic impact estimates are $24 million, including $10 million in projected visitor spending, more than $367,000 in sales tax and about $150,000 in lodging tax.

The Osage Nation helped to scout numerous sites across the state. Principal Chief Geoffrey Standing Bear and Chad Renfro, the Nation’s ambassador to the production, introduced filmmakers to cultural advisors, historians, local artisans and citizens to assist in their efforts to portray the story with authenticity and honesty.

“In recent meetings with Oklahoma Senators and House of Representative members, I made the point of how much their support for the movie industry has made a difference. This is a very strong, lucrative business that directly benefits many Oklahomans, including the Sovereign Nations. It promotes financial opportunities and cultural recognition for all,” Standing Bear said in the release. “The funding from the State of Oklahoma along with the efforts of the Osage Nation have proven to be a big draw for this film in particular. We are now seeing the fruits of all of our efforts to bring this great movie production here and now!”

The OF + MO partnered with Apple Studios to fill hundreds of production jobs for the project, and curate a crew development program with a mission to provide basic, industry-standard training and on-the-job experience to further expand the local workforce in Oklahoma’s film industry. To date, dozens of production assistants have been hired, participating in mentor sessions with the crew, including Osage tribal members, according to the release.

While in Oklahoma, the production will spend millions with local businesses through hotel room bookings, construction materials, equipment rentals, catering, and much more, according to the release.