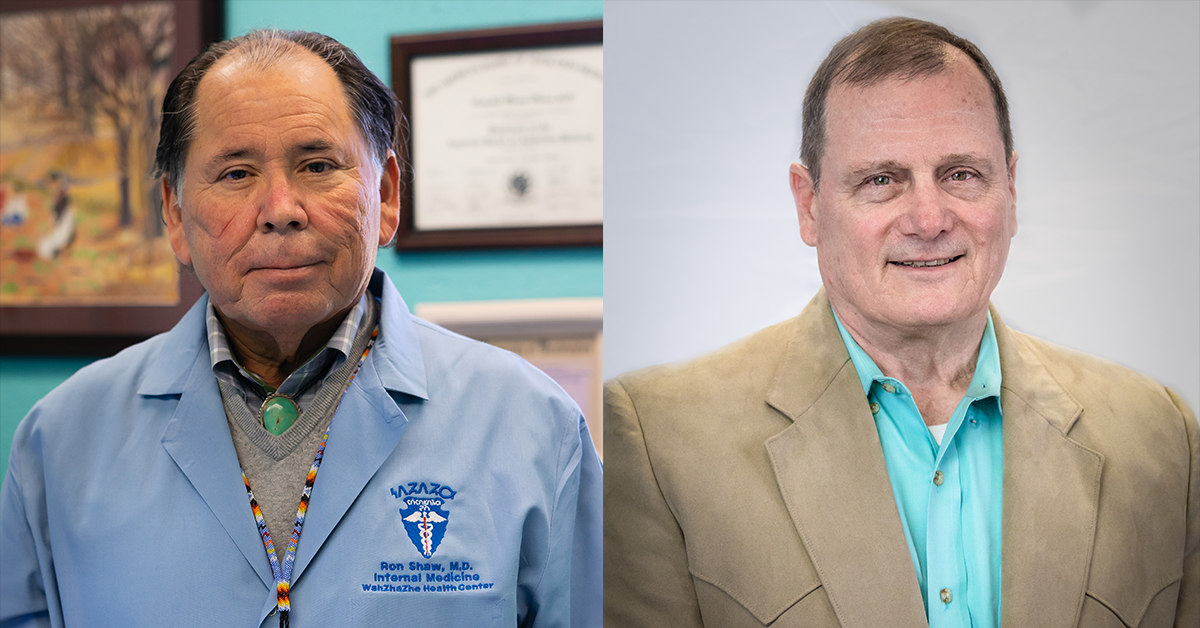 Photo caption: Dr. Ron Shaw (left) and Jim Littleton have resigned from their positions with the Osage Nation. Shaw served as the Wah-Zha-Zhe Health Center's CEO and Chief Medical Officer, and Littleton served as the Nation's Treasurer. Osage News

In less than a week, the Osage Nation Health Services CEO and the Nation’s Treasurer has resigned.

Rumors abound within the community about why both resigned, but their resignation letters are not telling. Shaw hints at a dysfunctional financial climate he worked within.

“I have found that I cannot reliably accomplish the task of supervising and being responsible for the financial performance of the Osage Nation Health Services without proper accounting and procurement support,” Shaw said in his resignation letter. “We have a financial officer who has yet to be enabled with access to accounting software or to be enabled with the proper approval authority to expedite financial transactions. We do not reliably receive proper reports and our COVID budgeting has not been discussed with us in sufficient detail.”

According to the ONHS Clinic Manager Kirk Shaw, who is no relation to Ron Shaw, he, Dr. Shaw and Samuel Guild, the Clinic’s Financial Analyst, were responsible for the COVID budgeting and reporting for the clinic. He said ultimately the reports were included in the Treasurer’s monthly report to the Osage Nation Health Authority Board, the board tasked with overseeing the clinic’s functions. The Osage News has requested the Treasurer’s monthly reports.

“We are responsible for spending and reporting and I cannot reliably be responsible for this without timely reports. I do not wish to be responsible for our financial performance without the proper supports and feel destined to fail,” Shaw wrote in his resignation letter. “There has been no response to my previous requests regarding increased compensation for my specific performance and received a poor performance evaluation last September and I must believe that my performance is sub-optimal. Best that I depart and allow someone else come in and do a better job.”

Shaw’s contract requires two months’ notice before his departure. His last day of work is June 11. However, on Wednesday morning Shaw was rushed to St. John Medical Center in Tulsa via ambulance from his home in Pawhuska. As of 3 p.m., Shaw was still at St. John’s in the ER, according to sources close to his family.

Littleton did not respond to requests for comment about his resignation. His last day is May 14. According to his two-sentence resignation letter, he wrote, “My time here at the Nation has been a memorable experience and I hope that the Nation will move forward and the transition will be painless.”

Shaw received his undergraduate degree from Dartmouth College, his medical degree from the University of Washington School of Medicine and his residency training at the University of Oklahoma Health Sciences Center. Shaw is from the Grayhorse District and the father of former Grayhorse Drumkeeper Blaine Shaw. He was elected to the Osage Nation Congress in 2014 and was instrumental in the passage of bills and laws pertaining to ON health programs, including the creation of the Wah-Zha-Zhe Health Center. He resigned his office on Congress to become the health center’s chief executive officer/chief medical officer. Shaw also served on the Health Advisory/Authority boards and is a former Osage News health columnist. He also served as president of the Association of American Indian Physicians. Shaw is also the former medical director for the Citizen Potawatomi, where he practiced internal medicine.

Littleton was appointed by Standing Bear and unanimously confirmed by the Sixth Osage Nation Congress in 2019 to serve as Treasurer. He succeeded former Treasurer Samuel Alexander. A seasoned accountant, he stepped away from his own accounting firm (Littleton, Ruef & Associates PC) to assume the full-time duties. Littleton, who has Osage children including former Pawhuska District Drumkeeper Matthew Littleton, said at the time of his confirmation that he grew up with the tribe’s presence and has participated in several cultural activities where he met and worked with several Osages and their families.