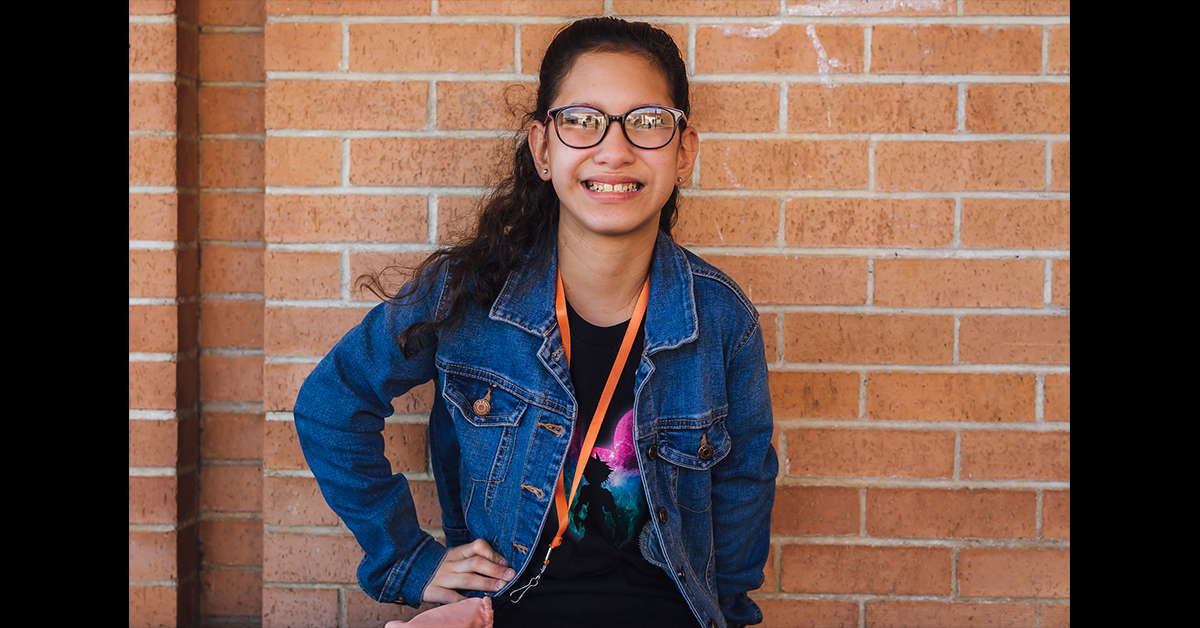 For the fifth year in a row, Son Wi Sellers has shared her story with local area students about her journey with hemiplegia cerebral palsy.

On March 9, a class full of 7th grade Pawhuska Junior High students listened to Son Wi share her life experiences. She began visiting the school after English teacher Jodi Culver invited her to speak to her class after she assigned a book by Sharon M. Draper titled, “Out of My Mind.” The book is about an 11-year-old girl who has cerebral palsy and the battles she overcomes.

Son Wi, who is also 11 and in the 4th grade at Pawhuska Elementary, was born three-and-a-half months premature. Doctors told her parents she had a 50/50 chance of making it, but when she survived, that’s when her medical journey began. Her mother, Amy Dwerlkotte, and her father, Osage actor Larry Sellers, have been by her side.

Hemiplegia cerebral palsy occurs in infants and children and is a type of cerebral palsy that results from damage to the part (hemisphere) of the brain that controls muscle movements. The term hemiplegia means that the paralysis is on one vertical half of the body.

“So far for me, it’s been coming along good,” she told the class.

She’s had numerous surgeries over the course of her short life, but a surgery in May 2020 was a game changer. At Shriner’s Hospital for Children in Shreveport, La., surgeons operated on her ankles, her feet (which they overcorrected her left foot and she now wears a bar along her left leg to help turn her foot outward), lengthened her groin, lengthened her left hamstring, and fixed her kneecaps. She casually told the students, “they put hardware in my right hip, and took it out from my left.”

Culver remarked to the class that Son Wi has come a long way. When she first visited her class in 2016, she was in a wheelchair. Then, she graduated to a walker, then a walking stick, and this year, she walked into the classroom on her own. This revelation prompted Son Wi to stand up proudly in front of the class, walk between the students and then sit back down again. “Yep, I’ve come a long way.”

She said she likes to play video games on her Nintendo Switch, and she likes to go on Disney Cruises. Her other said they had a Disney cruise scheduled in January, but they didn’t get to go because of the pandemic, to which Son Wi gave a thumbs down to the class.

She told the class she travels to the Children’s Hospital in Oklahoma City for outpatient treatments every four to six months for Botox injections in her hands and legs, which help to keep her muscles loose and prevents them from cramping.

After her surgery in May 2020, her mother posted this statement on her personal Facebook page.

“My daughter’s strength is that she falls down I bet close to 50 times a day or more, mostly without warning, trips over things, struggles to use her left hand, walks differently, struggles to fit in, struggles to play with the other kids with activities most kids wanna play,” she said. “And she does it without complaining! She doesn’t feel sorry for herself, she doesn’t let ‘I can’t’ keep her from ‘I wanna try!’”

Dwerlkotte said her daughter is the bravest and strongest person she knows.