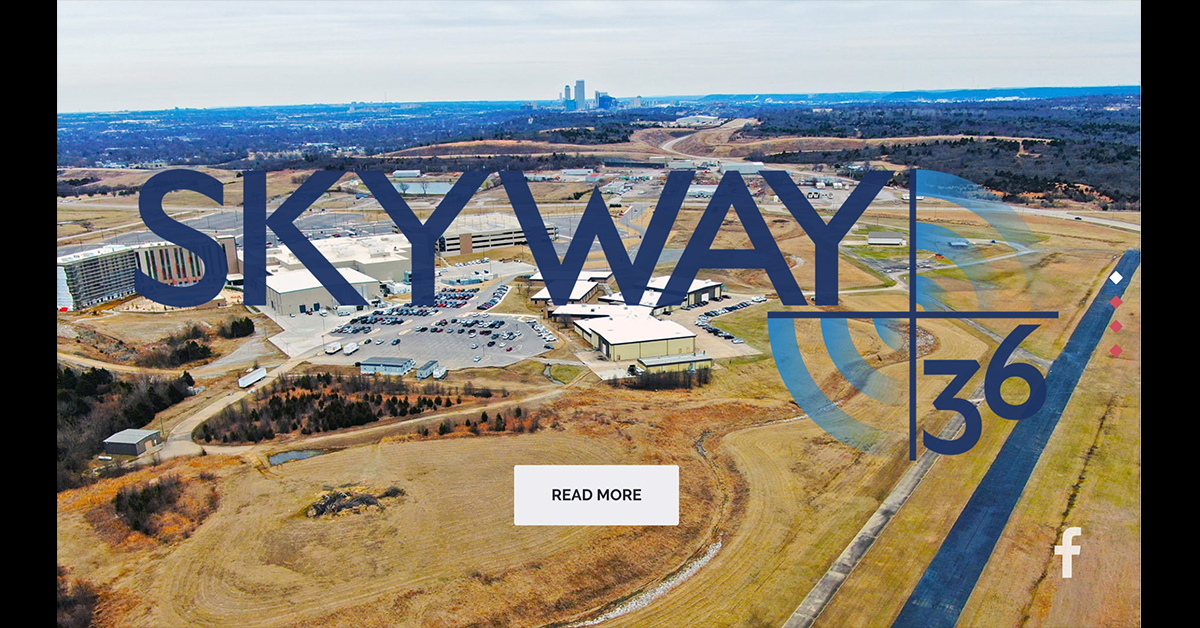 Photo caption: The former airpark property where Skyway36 is located also includes Osage Casino Central Services, next to the Tulsa casino and hotel. Screenshot of skyway36.com

The Osage Nation is continuing with plans to develop the former Tulsa airpark – now Skyway36 - into a Drone Port thanks to a recently awarded $2.1 million federal grant and $400,000 in tribal funding for renovations to a hangar at the property.

During the 2021 Hun-Kah Session, the Seventh ON Congress approved a $400,000 appropriation bill (ONCA 21-33 sponsored by Congresswoman Pam Shaw) to renovate the Skyway36 North Hangar. The former airpark property also includes Osage Casino Central Services located next to the Tulsa casino and hotel.

Principal Chief Geoffrey Standing Bear told the Congress the Nation is receiving the $2.1 million grant from the U.S. Economic Development Administration. He learned of the grant application approval from a recent letter written by Tulsa businessman George Kaiser and during his Hun-Kah Session executive message, Standing Bear read Kaiser’s letter.

“We think this is a great opportunity for the Osage Nation and for all of northeastern Oklahoma. Last year when we engaged some consultants to help us identify the most significant industries of the future for Oklahoma economic development and quality jobs, your facility helped lead us to drone development and testing as one of the five areas to focus upon. We are pleased to be involved with you and with Oklahoma State University in helping to make this effort a success,” Standing Bear read from Kaiser.

“Mr. Kaiser is chairman of Bank of Oklahoma, a very successful businessman who knows obviously a good thing when he sees it... Although not technically a match requirement, it does show Osage Nation commitment which will support our relationship with the U.S. Economic Development Administration and the Tulsa business community.”

During the session, the Commerce, Gaming and Land Committee initially heard ONCA 21-33 before it was referred for a vote by the 12-member Congress. Shaw said the hangar was built in 1940 and needs extensive renovation work to attract businesses that would lease the structure, including paint work, HVAC and other needed upgrades before marketing to outside companies.

Shaw said the Nation has researched potential building uses including Drone public safety, leasing office space, Drone training and conference space. “Economic development is very high as one of the priorities in the strategic plan and I think as Congress people for the Osage Nation, it’s important that we support these endeavors especially considering the fact that our Executive team did the work to obtain the $2.1 million grant,” Shaw said.

Assistant Principal Chief Raymond Red Corn has worked on development plans for Skyway36 along with Mark Kirk, the Nation’s Information Services director, for the past four years. The hangar is 11,000 square-feet and includes a building that formerly housed an aeronautics school, he said.

“We finally had the opportunity to apply for a grant that would transform that end of Central Services into a place that would probably have a couple of functions. One of the great selling points that we have to offer for this place is not how it looks, what we do have to offer that does matter is its location ... Unfortunately for us, the COVID pandemic really put a kink in the finalization of those plans, but what we’re doing here is very consistent with the conversations we’ve had with (Osage Casinos Central Services). The reason it’s a good location is because of the casino. There are very few places in the United States where you can have a short-end runway dedicated to Drones, few hundred acres to fly them if you need to fly them off the immediate site, a hangar, a large meeting space and office space directly adjacent to a hotel that is only 10 minutes from Tulsa International Airport.”