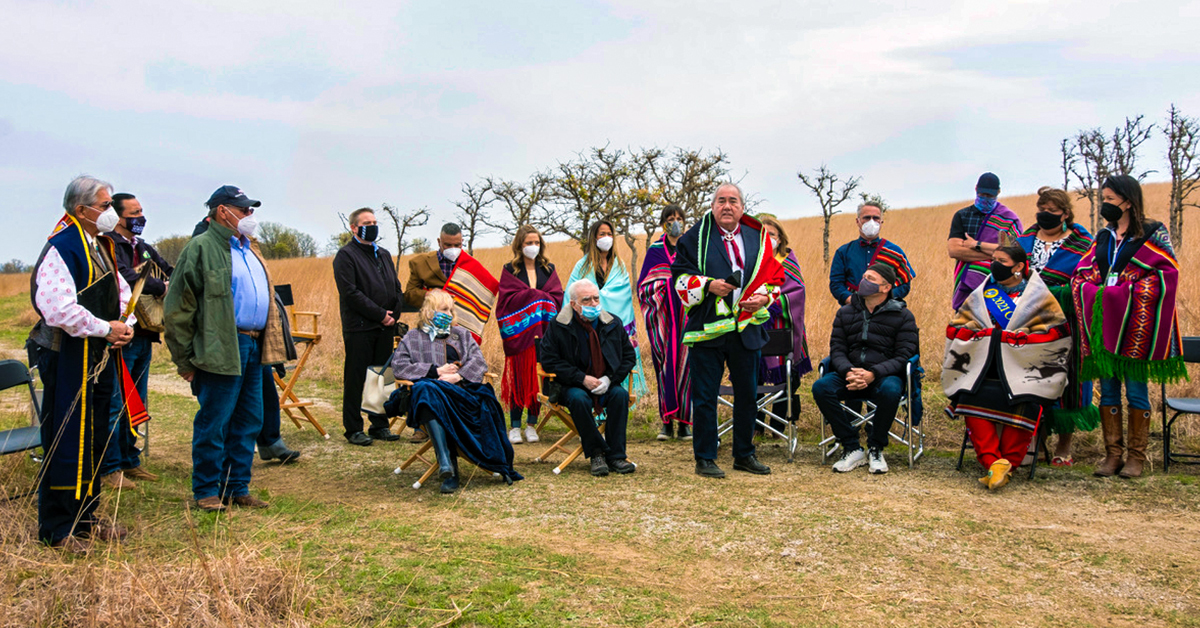 Photo caption: Principal Chief Geoffrey Standing Bear addresses the cast and crew on the set of the upcoming film, “Killers of the Flower Moon,” before a blessing occurred. Courtesy Photo/Apple

On a chilly morning in April, OJ Littlecook’s voice rang out over the Osage hills as he sang a prayer song for the cast and crew of the upcoming film, “Killers of the Flower Moon.”

Members of the Osage Nation and more than 100 cast and crew, including director Martin Scorsese and lead actors Leonardo DiCaprio and Lily Gladstone, gathered on a hilltop just west of Bartlesville for a blessing on April 15.

Grayhorse Head Committeeman Archie Mason was asked to say a prayer for the occasion as they embarked on telling the Osage people’s story.

“Whenever I am asked to pray, I do. I was asked to come to this noontime event in presence of the cast and workers and other VIPs, including our Osage people and leaders, and was honored to accommodate the request,” Mason said. “I prayed for a successful production, safety for all in their activities, good health, and continued working relationships between the production and the Osage Nation and our people.”

“Killers of the Flower Moon,” an Apple Original Film, is based on David Grann’s bestselling book of the same name. It is the true story of greed, deceit and evil, that surrounded the Osage people in the 1920s. This period, known as the Osage Reign of Terror, led to the systematic murder of Osages for their oil wealth.

Grann’s book centers around the Kyle family, an Osage family from Grayhorse. A ring of criminals focuses on the women in the family, killing the mother and three sisters of Mollie Burkhart. Federal agents arrive, solve the case and the FBI is subsequently formed. However, that was just one case for one family. The Reign of Terror affected hundreds of Osage families across the reservation, bringing great pain and suffering to generations.

Chad Renfro, Osage Ambassador to the film, said he wanted Wakanda (God) to watch over all Osages and the filmmakers as they make the story come to life.

“Coordinating these types of momentous occasions is part of the role of Ambassador for the Osage Nation to the film,” Renfro said. “Along with Principal Chief Geoffrey Standing Bear's Executive Office, I worked closely with the producers and more importantly with our elders and community to make this First Day of Filming ceremony especially Osage. Prayer and Song go hand in hand with any special occasion for us and I felt it was important to acknowledge that and bless this occasion like that.”

Scorsese spoke first, acknowledging that the film was shooting on the traditional lands of the Osage, and expressed gratitude to the Osage ancestors who lived on the land in the past. According to a release, DiCaprio thanked the Osage people for their generosity in hosting the film crew, saying “it is with great reverence and humility that we tell this incredibly important story.”

Standing Bear said the cast and crew shook their hands afterward and said they appreciated the prayers.

“I took the opportunity to tell them that the Osage are prayerful people and how our elders liked to talk to God,” he said. “I told them I appreciated everyone I’ve met so far and that they were being respectful to the Osage and Osage ways, and that we’ve been on a long journey.”

The ceremony was a beautiful and moving occasion, a fitting way to mark the start of filming, which began on April 19, according to the release. It gave the filmmakers an opportunity to express directly to the Osage people their great appreciation for welcoming them onto their land.