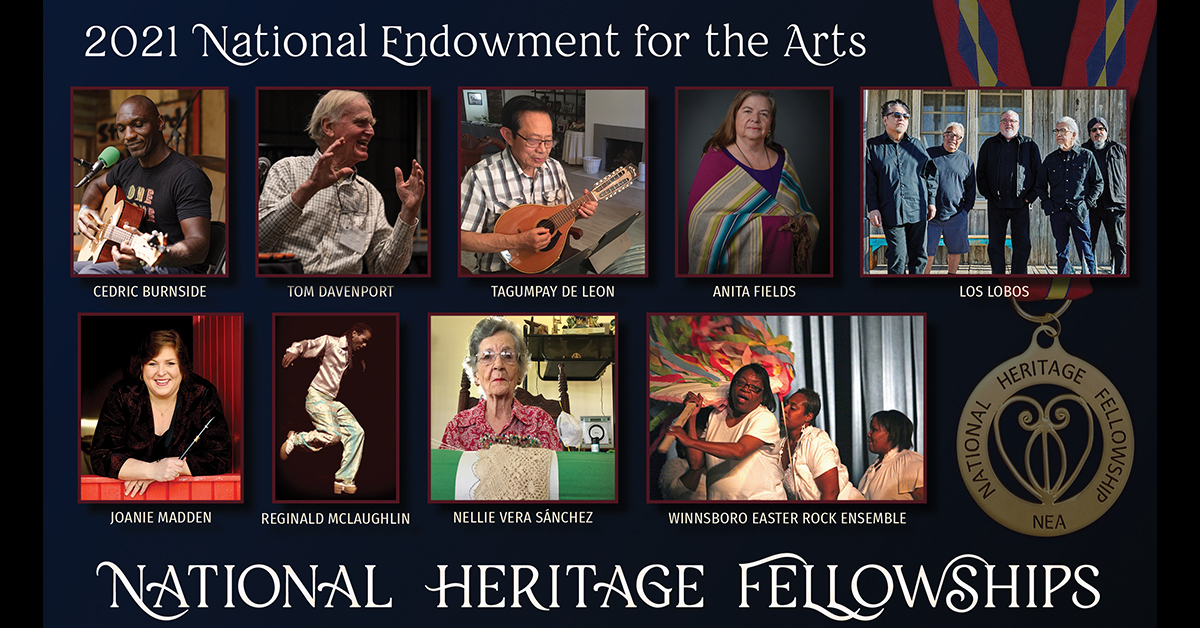 Anita Fields, Osage multidisciplinary artist who primarily works in clay and textiles, has been named as a 2021 NEA National Heritage Fellow. The highest honor in the folk and traditional arts.

The National Endowment for the Arts has honored the rich, artistic heritage of America through the NEA National Heritage Fellowships since 1982. The fellowship includes an award of $25,000 to each of the nine recipients, who will be featured in a film that will debut on Nov. 17, 2021, on arts.gov.

“The diverse art forms of the National Heritage Fellows allow us to experience and appreciate the rich cultural traditions that make up America,” said Ann Eilers, acting chairman for the National Endowment for the Arts in a news release. “It is inspiring how these artistic practices continue the legacy of generations past while blending contemporary elements as they continue into the future.”

The 2021 NEA National Heritage Fellows are:

A blues guitarist, drummer, singer, and songwriter, Burnside tells the story of the Black American experience from the heart of the North Mississippi Hill Country.

A master teacher and performer of rondalla, the traditional Spanish-influenced music from the Philippines, De Leon promotes the tradition to uplift the heritage of the Filipinx diasporic community.

A multidisciplinary artist who maintains longstanding Osage ribbon work practices while creating her own contemporary designs, Fields aims to dispel myths and stereotypes surrounding Native people through her work with clay and textiles.

A Mexican-American music band influenced by the deep and soulful Mexican and Latin American sounds they grew up with, Los Lobos also integrated the American vernacular traditions of blues, rock-n-roll, conjunto, and jazz into their own unique sound.

One of the great Irish flute and whistle players of her generation, Madden has led the all-female group, Cherish the Ladies, since its inception more than 35 years ago and passionately champions the advancement of traditional Irish music.

A master of tap dance known for his distinctive “hoofing” style, McLaughlin has tapped his way from the Chicago subways to a worldwide stage. He preserves the tradition through educational programs that continue to energize the artform.

A tradition bearer of mundillo, the intricate bobbin lace tradition that is centered in the western Puerto Rican municipality of Moca, Sánchez was influential in establishing the Museo del Mundillo and describes the art form as “her way of life.”

Founder and director of Folkstreams, a nonprofit dedicated to finding, preserving, contextualizing, and showcasing documentary films on American traditional cultures, Davenport is the 2021 recipient of the Bess Lomax Hawes National Heritage Fellowship, presented in recognition of an individual who has made a significant contribution to the preservation and awareness of cultural heritage.

Including the 2021 class, the Arts Endowment has awarded 458 National Heritage Fellowships, recognizing artists working in more than 200 distinct art forms, including the late Osage Ribbonworker Georgeann Robinson in 1982.

Fellowship recipients are nominated by the public, often by members of their own communities, and then judged by a panel of experts in the folk and traditional arts. The panel’s recommendations are reviewed by the National Council on the Arts, which sends its recommendations to the Arts Endowment chairman, who makes the final decision, according to the release. The deadline to submit a nomination for the 2022 class of National Heritage Fellows is July 30, 2021. Visit the National Endowment for the Arts website for more information and to submit a nomination.

For more about the NEA, visit the Arts Endowment’s website.