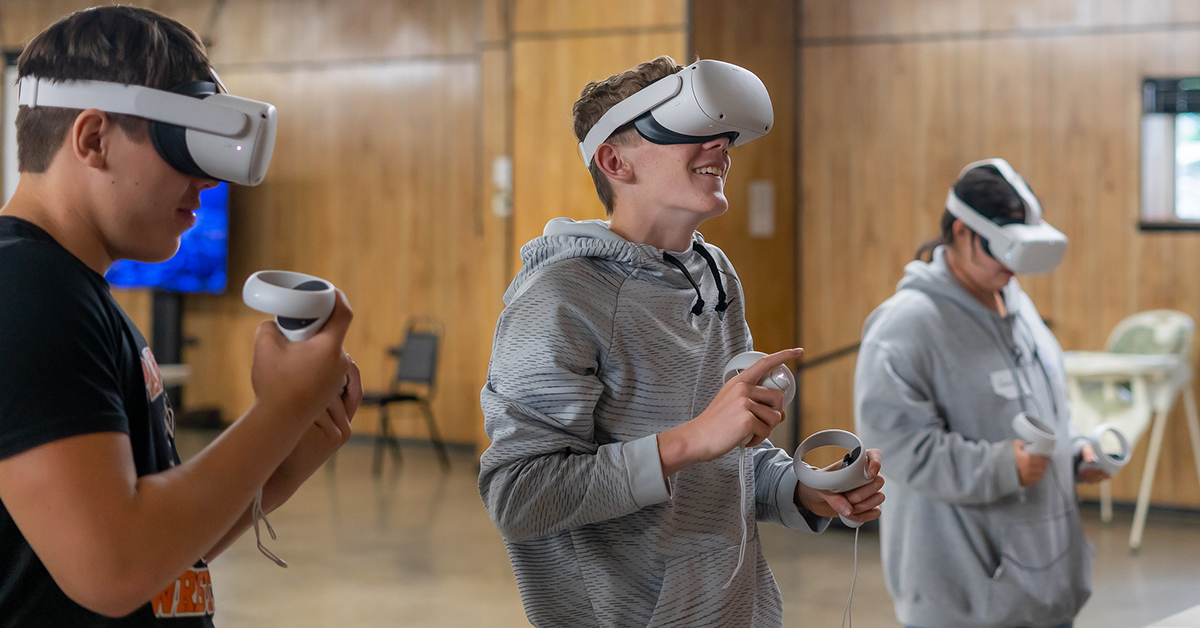 Have you ever wanted to learn how to sing at the drum? Play Indian Dice? Visit the Hominy Inlonshka arbor? Well, now you can.

The Osage Language department and the Wahzhazhe Cultural Center teamed up during the pandemic to work with the latest technology and share their cultural teachings with Osages everywhere.

The result is their first Virtual Reality desktop experience. Still evolving, the experience is currently available on Windows 10, but developers are working on a version for Mac iOS users and the Oculus Quest. The experience takes users inside the WCC’s cultural trunks, which cover the topics of cooking, the drum, and games.

“We decided to go with the trunks because that’s what fit, that was the only way we could make a virtual reality experience fit into the CARES Act funding,” said WCC Director Addie Hudgins. “During the pandemic, we were unable to take our cultural trunks anywhere. We usually go to all the Head Starts, WELAs, immersion school. We’d get really busy in November for Native American month for all the schools.”

Together, the two departments received just under $1 million from the Nation’s CARES Act funding in 2020. They put their money to good use. They bought the rights to the late Carolyn Quintero’s “Osage Dictionary” so they could share her extensive work on their new website. They worked with Osage artist and filmmaker Ryan RedCorn, and his company Buffalo Nickel, to produce 30 cultural videos that can be found on their website and on their social media pages. They are releasing a new video each week and each video is accompanied by educational content that can be found on their website.

Working with the Houston-based company METECS, Hudgins and her staff took the developers to Hominy to take photos of the dance arbor and Roundhouse.

“So, for the drum trunk, you’re in the Hominy arbor. The games trunk, we did that in the Hominy Roundhouse, so when you’re in it, it’s like you’re there. When they made it, it’s kind of hard to explain to them what a camp looks like for when we’re cooking,” Hudgins said. “In the cook’s trunk, the purpose of that experience is to show how to set a table, from putting down the bag, the plate, the salt and sugar, and then once you’re done it pops up on the screen and says good job.”

With every experience is a board for the user to click on the Osage language to hear the corresponding word said in Osage by a language instructor, along with the orthography.

“For the drum trunk, you get in there and get the trunk out and a drumstick comes out and you can sit like you’re sitting at the drum singing,” Hudgins said. “When we expand on this section users will actually be in there learning a song.”

Hudgins said the game trunk has the items used for a hand game as well as a dice game. She said as the experience evolves the users will be able to play a game of dice with another user, no matter their location.

She stressed that the VR experience has only recently launched and there is a lot more to come.

“There isn’t a lot there right now, and it’s like once you’ve seen it, you’ve seen it. But, like I said, it’s a jumping-off point and we already have lots of big ideas of what we want to do with it,” she said. “They are going to do an extended version of the desktop version because we noticed it doesn’t really work well for the younger kids. We’re working on a version that will work great for ages 0 to 100 years old, anybody can use it, not just the headsets but the desktop as well.”

The Nation just received $108 million from the American Rescue Plan and the ON COVID Task Force has already reached out to the Language and Culture departments on projects they would like to expand, such as the VR experience. Hudgins said once they receive more funding, they will add the clothing trunks to the experience for both men and women.

Hudgins said constituents can sample the VR experience at the Cultural Center in Pawhuska and the Osage Nation Visitor’s Center.

For more information on the Osage Language Department or the Wahzhazhe Cultural Center, please visit their website at https://www.osageculture.com/