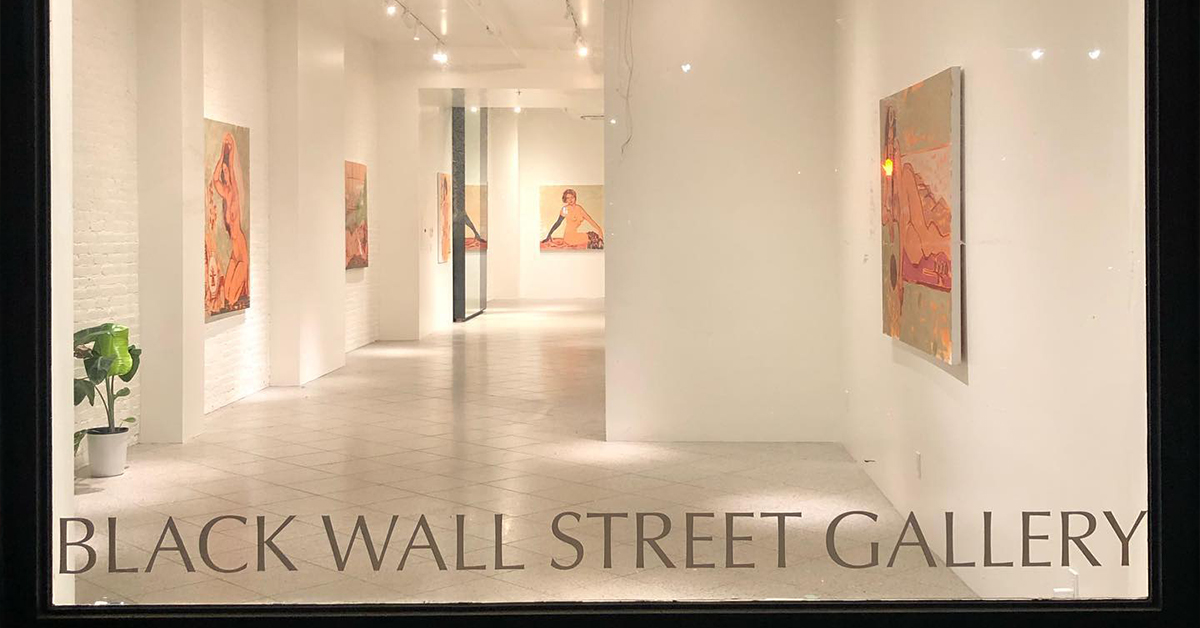 Tulsa natives Dr. Ricco Wright and Charica Daugherty apologized to the Osage Nation on Saturday after the Osage community condemned their Reign of Terror-themed art exhibit that opened in Tribeca, New York on Thursday.

The exhibit, titled “Wolfsbane and the Flower Moon,” showcased six oil paintings by Daugherty that depicted nude poses of Reign of Terror victims Mollie Burkhart and Anna Brown. The exhibit was the featured show at Wright’s Black Wall Street Gallery and was supposed to be on display until July 21. However, after the Osage community lambasted the gallery and Daugherty online, Wright said the show was coming down and that all six oil paintings would be destroyed.

“On behalf of Black Wall Street Gallery and our represented artist Charica Daugherty, I want to write an open letter of apology to the Osage people for the mistakes we made. Yesterday, we took the necessary time to reflect on what the Osage people were saying in response to our exhibition,” Wright wrote. “We profusely apologize for 1) not seeking your counsel on the exhibition, 2) using the spider symbol in one of the works, 3) using the dream catcher in two of the works, and 4) depicting your deceased ancestors in nudity.”

For two days, prominent Osage artists and community members accused Daugherty of trying to capitalize on the Osage Reign of Terror and the upcoming film, “Killers of the Flower Moon.” They accused her of sexualizing Indigenous women, fetishism, exploiting Indigenous bodies, and dehumanizing Osage and Indigenous women.

Her painting titled, “Mollie before the Wedding,” particularly angered the community. The painting depicts a nude Mollie Burkhart kneeling on a floor etched with Osage ribbonwork, fastening a white veil to her head. By her knees is a vase with the Osage Spider symbol on the front; next to the vase is a pair of William Hale’s glasses. The Traditional Cultural Advisors Committee made up of Osage elders banned the use of the Spider symbol in 2017due to its cultural sensitivity.

Mollie Burkhart was an Osage woman who lived in the 1920s during the Reign of Terror. Her three sisters and mother were murdered for their oil wealth. Her older sister, Anna Brown, who is also depicted in Daugherty’s paintings, was shot in the head and found in a ravine near Fairfax in 1921. The crime ring that killed Mollie’s family was orchestrated by her husband’s uncle, William Hale, a prominent white rancher. Her husband Ernest Burkhart was complicit in the killing of her family and planned to kill Mollie as well.

Daugherty, who is also a history teacher at Tulsa Hope Academy, apologized for her paintings.

“My heart was to reflect the emotions that stirred in me from hearing these women’s story. As an artist, my process of reflecting on femininity and the experience of womanhood is through the nude. For me, nudity presents the vulnerability and strength of a woman. Please know that my work came from a place of an emotional response to this painful story,” she wrote. “I should have reached out to the Osage Nation before even attempting to present art regarding your history. I want to directly apologize to the Osage people for this failure to seek proper understanding and counsel before attempting to share art regarding your history. I sincerely apologize.”

In the initial posting about the exhibit on the gallery’s Instagram page, director Martin Scorsese and actors Leonardo DiCaprio and Robert De Niro were tagged. All three are associated with the upcoming film. Osage Indian Murders and Killers of the Flower Moon were hashtagged.

Both Daugherty and Wright have seen their fair share of controversy. Daugherty and her husband John both plead no contest to promptly report child sex abuse in 2013 when a 13-year-old girl who went to their church reported one of the staff members raped her. At the time they were senior high youth pastors at Victory Christian in Tulsa. They were sentenced to five years’ probation. They also had to create a written policy on reporting future abuse immediately and share that plan with at least 20 other churches or organizations that are in charge of children, according to a News on 6 article.

Wright dropped out of the 2020 Tulsa mayoral race after a local Tulsa artist accused him of sexual assault. The woman held a press conference and read a statement about the night Wright allegedly assaulted her. According to a KJRH article, Wright acknowledged her accusations and said he was “roofied” the night of the alleged assault. He later walked back his comments and denied the allegations, but not after some former colleagues agreed with the women and spoke out against Wright on their social media pages.

Prominent Osage artists posted on the Black Wall Street Gallery’s initial Instagram posts about the exhibit. All posts pertaining to the exhibit on Instagram, and videos on YouTube, have been taken down.

Anita Fields, 2021 NEA National Heritage Fellow: “As an Osage woman and artist I am saddened by the misuse of our symbols, I’m referring to the symbol on the vase. There are certain areas that are off-limits to one who doesn’t belong to our culture. I have watched the video about the paintings, and though there is an apology at the beginning about mispronouncing the name of Mollie Burkhart, calling her Mollie Burkett over and over lessens her existence and the tragedy of her life. As an artist, I am totally open to the expressions one makes, but careful examination of others history and culture should always be considered.”

Ryan RedCorn, Owner Buffalo Nickel Creative and member of the 1491s: “While I appreciate this gallery’s mission and I can’t talk for the entire Osage community, I can’t help but feel these paintings should come with more artist explanation of what the intent was here to create dialogue and what that conversation is shaped liked. As an Osage whose art studio is one block from the film set and also a descendant of a victim of this time period, I’m not sure what that conversation is. To be clear I’m not talking about technical merit. The paintings in that regard are sound. But there are symbols in some of these paintings that warrant conversation.”

Addie Roanhorse, Big Rain Gallery and Roanhorse Designs: “As an Osage Woman and artist I am hurt by seeing this misrepresentation of my people created by a non-Native. Have you no respect? Take this show DOWN.”

Dr. Jessica Moore Harjo, Weomepe Designs: “As an Osage woman and artist I cannot believe this is a work on display at this moment. I try to see the good, I tried to watch the YouTube explanation but after about 5 minutes of mispronouncing Mollie Burkhart’s name and saying that this woman was your inspiration- screams out as you did not do your research. Don’t apologize if you used the dream catcher and the spider symbol in the wrong way…. Find out if you should even be using them in the first place.

“As a college professor in fine arts, this work of art is in need of several rounds of critique before it should be on public display. I am offended that there is a lack of knowledge about the Osage women in this story, the “pan-Indian” “symbols” being used in a mascotry display is distasteful. On top of that, we are fighting the exploitation of our Native women every day.

“Missed the mark completely. Please let this be a learning moment for anyone who is interested in working with communities not of your own. Please communicate and make sure what you are doing to represent a tribe of people, who’ve been exploited in this story itself, is appropriate. That’s all we ask.

“If the artist is from Tulsa and living in Osage county which is the Osage reservation, she has no excuse not to do the background work and meet with Osage artists and families to ensure that this work is culturally appropriate.”

Wright has been responsive to questions from Osage tribal members on the Black Wall Street Gallery’s Instagram page following his apology. He explained neither he nor Daugherty were taught the history of the Reign of Terror and wanted to continue an honest and open dialogue with the Osage people as a way to “heal, unite, and love.”

“An Osage person raised a great point that really hit home and made us fully aware of our mistakes: How would black people feel if a non-black person painted Breonna Taylor in nudity as a way to immortalize her just because the artist had an emotional response to her tragic death?” he wrote. “Speaking for myself, it would certainly make me uncomfortable. This realization was very helpful for me and now I completely understand why the Osage people were upset about it.”

Editor's Note: This article was updated after Dr. Ricco Wright published an additional statement that said he would destroy the paintings, instead of paint over them and repurpose them.