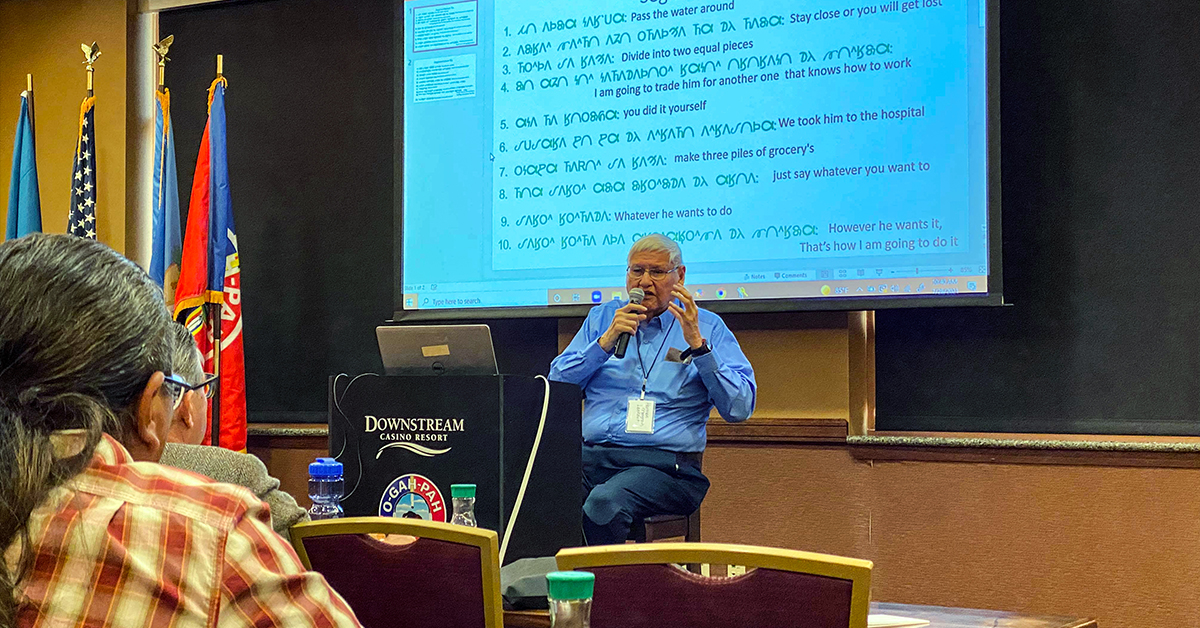 QUAPAW, Okla. – While attending the 10th Annual Dhegiha Conference, one will hear a lot of Indigenous languages spoken, a lot of conversations and laughter. It’s an annual conference that brings together language speakers from the Osage, Omaha, Quapaw, Kaw, Ponca and Northern Ponca nations. They all share the same mission: Keep their languages alive.

The theme of this year’s conference, “Honoring Those We Have Lost to the Pandemic,” brought a passionate and emotional presentation from the Omaha, about the loss of one of their elders to COVID-19. It also brought up the subject of teaching Indigenous languages during a pandemic, which forced many of their language teachers to learn new technology, to teach online. There were many in the room nodding their heads in agreement.

Conference organizers are still allowing on-site registration as the conference will continue through Thursday, July 29. The conference is held at the Quapaw Nation’s Downstream Casino & Resort and this year more than 200 people and their families are in attendance.

Attendees are usually language instructors from their respective tribes, or language students passionate about preservation. Instructors from the Osage Nation Language Department are in attendance, as well as Principal Chief Geoffrey Standing Bear. Young students from Daposka Ahnkodapi, the Osage Nation’s school, are also in attendance but they seem to be more interested in swimming in the pool.

The first presentation of the conference was made by Osage elder and linguist, Mogri Lookout. Lookout, 80, is currently a Master Teacher for the Nation’s language department, but he was also the Nation’s first language director when the reformed government and gaming money made the initiative possible in 2006. Through the years, his knowledge of the Osage language and culture has proved to be indispensable. Most of his students call him uncle Mogri or uncle Mog, pronounced Mogue, but it’s also clear that at the Dhegiha conference, many of the attendees share this same respect for him.

“We have a lot of young people that have a lot of energy and they’re doing great work. I’m not going to say they’re not doing it right, but we have to find a way to conceptualize the language, to paint a picture as we talk,” Lookout said. “It’s going to take a lot of education and Chief Standing Bear has brought a lot of interest and a lot of people into our language program ... there’s a whole bunch of studying, a whole bunch of academia to put into place, to get these second-language speakers to get talking.”

As part of his presentation, “Dealing with Incorporating Languages,” he showed how he breaks down an Osage sentence. Lookout is always a picture of humility. He is quick to say he is “uneducated” and that he “isn’t a linguist,” but his mastery of breaking down the Osage language into English parts of speech and the explanation of why, is what some would call brilliant. Because of his work, second-language speakers can now understand and learn how to craft Osage sentences of their own.

“Pardon me uncle Mog, you say you’re not a linguist? Well, that’s the purist linguistic work that I’ve ever seen. Education comes in many forms, and you’re the sun, basically, in terms of what we Dhegiha speakers are trying to recover for ourselves,” she said. “I got the message: in order to learn the language, we’re holistic people, we’re not segregated, not compartmentalized ... when you learn another language, you have to learn another mind, and I just want to say Thank You for getting us back to our languages.”

Lookout spoke about the way Osages lived when he was growing up. He spoke about his upbringing with his grandparents until the age of 6, his young life living in the Pawhuska Indian Village. He didn’t come around non-Indians much until high school and then later into the white man’s world where he learned a trade. All this time, things were simple with his family and in his life. They were a humble, praying people and they often had dealings with other tribes.

He recalled his father, whose first language was Osage, could speak with members from the Ponca Nation and other surrounding tribal nations and they understood each other. The languages were very similar because the tribes often came together. Now, the tribes are separated and don’t come together often and as a result, they no longer understand each other.

The mission statement of the Dhegiha Preservation Society is “the Osage, Omaha, Quapaw, Kaw, Ponca and Northern Ponca peoples are bound to one another through a shared history, ancient social, political and cultural relationships and a common language, the latter of which is in jeopardy of extinction. Cognizant of the critical importance of the Dhegiha Language to the cultural and social well-being of each respective tribe, the undersigned do hereby come together to establish the Dhegiha Preservation Society for the purpose of protecting, preserving and perpetuating the Dhegiha Language through training, education, publication, program development, curriculum development, outreach and social and cultural exchange activities.”