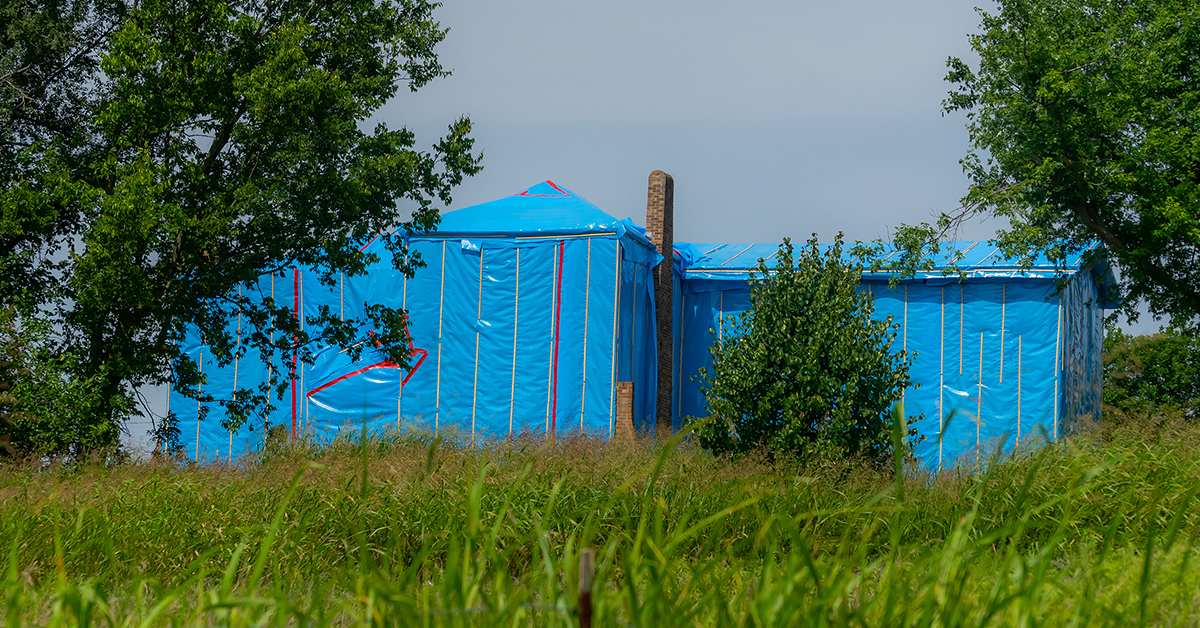 Photo caption: The Tallchief mansion will be renovated and made into a community space, at the design of the Osage Nation and the Tallchief family. CODY HAMMER/Osage News

For now, the Osage Nation Executive Branch will have to find a way to fund the restoration of the historic Tallchief mansion without Congressional appropriation.

Congresswoman Pam Shaw withdrew her bill, ONCA 21-84, on the last day of the 10th Special Session. The bill was an appropriation of $300,000 for the restoration of the Tallchief mansion. But after the Congressional Government Operations Committee met on July 30 to discuss the bill, they expressed their concerns over ownership and construction costs.

“ONCA 21-84 was passed out of committee with a do not pass recommendation, which I attribute largely to the questions regarding ownership of the mansion,” Shaw said. “I decided to withdraw this legislation but intend to bring it before Congress in a future session when we can provide assurance that there are no risks in moving forward. I support the Nation’s efforts to restore the Tallchief Mansion and, most of all, to prevent any further deterioration of this positive and important piece of our history.”

According to Director of Operations Casey Johnson, the Nation owns 50 percent of the home that sits on 30 acres of restricted land. The other 50 percent is owned by Maria Tallchief’s daughter Elise Paschen and her two adult children. Since the land is restricted, the Nation and the Tallchief family must follow the Code of Federal Regulations and wait until both children are 21 years of age before they can pass their ownership to the Nation. Johnson said Paschen and her children have expressed their wish to transfer ownership to the Nation. Her daughter is already over the age of 21 and her son turns 21 in November of 2022.

“It does make me incredibly nervous that we don’t own it. I just know that past experiences of growing up and knowing people that have half owned and co-owned, and all the experiences I’ve heard have not ended well,” said Congresswoman Alice Goodfox. “My question is if we put more money into this, is there a 100% guarantee that no one would be able to sell, and if they did, could we recuperate the money we put into it after a sale? How would that work?”

Also concerning the committee was that the $300,000 was for architect and engineering costs, not the total cost of what the restoration would be. Congressman RJ Walker quoted his grandfather, the late Mark Freeman Jr. in his comments.

“The amount of $300,000 for A and E for construction cost [architect and engineering], is a lot. And the concerning thing about it is we don’t own the house. I trust people, but I don’t want to be gullible with money that isn’t mine. This is what my grandpa would call, ‘Bettin on the Come.’ I just can’t in good conscience vote for this, so my vote will be a no.”

Congresswoman Jodie Revard agreed with the hesitations of her colleagues but wanted to support the bill.

“I’m with you Congressman Walker, I support it and it is our asset, even if it’s 50%. I want people to come to our home and see something beautiful, see a story of success and beauty. They’re going to be coming to Grayhorse to see the tragedies that happened over there but when they see that it’s going to beautify that, of who they are and keep their spirit alive and our homeplace,” she said. “I’m about sending this out with a do-pass, I like that we’re going to use the tribal dollars, but I’ve got some hesitation too, but I’m going to say yes.”

On Aug. 2, Shaw withdrew the bill.

Principal Chief Geoffrey Standing Bear said the Tallchief mansion restoration is something they have taken in steps.

“The Visitor Center in Pawhuska is an example of another project which did not receive the majority of Congress support until we developed it in small steps, then, one year the Congress changed their minds and made a large investment,” Standing Bear said. “We will keep taking steps forward with what limited resources there are and hope Congress will change their minds about this important piece of Osage history.

“Some Congress members have indicated that once the grandchildren of Maria Tallchief reach the age of 21 and are able to convey their 50% ownership, then they will support the project. That day is not too far off in the future. In the meantime, as 50% owner, the Osage Nation will work to at least keep the building from deteriorating. It is a beautiful place for a museum and retreat.”