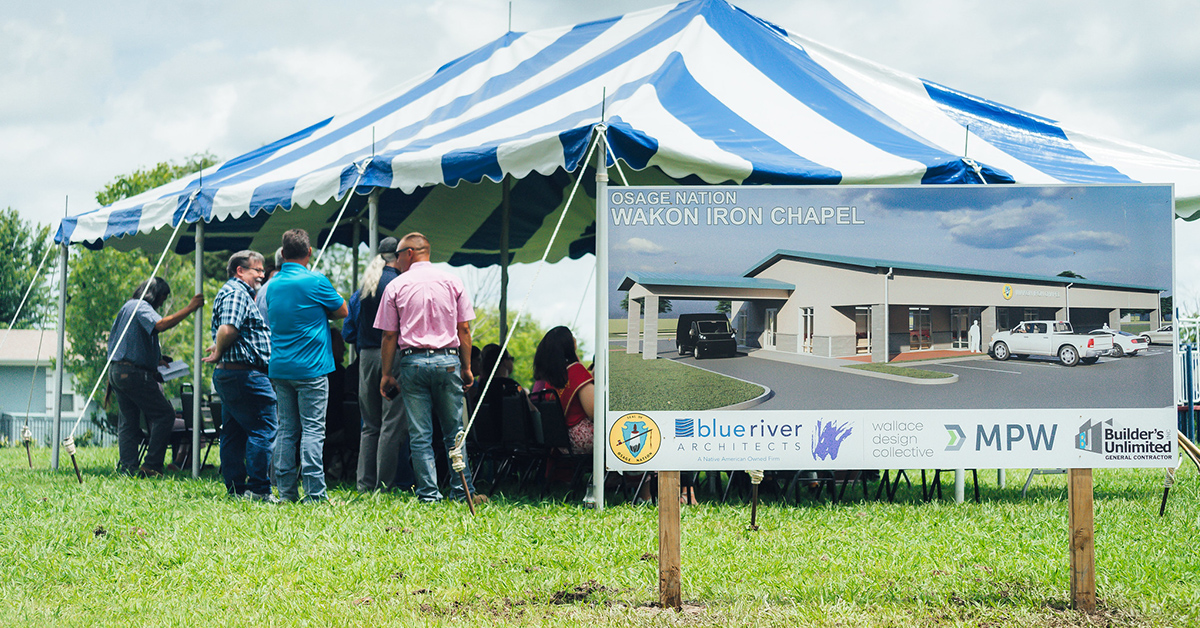 Photo caption: An artist’s rendition of the new Wakon Iron Chapel is posted on the grounds. CODY HAMMER/Osage News

Amid an afternoon rain and the summer's humid temperatures, Osage officials and village residents gathered under a special event tent on June 30 set up at the future larger chapel site to celebrate the project. During the 2021 Hun-Kah Session, the Seventh ON Congress approved a $1.7 million appropriation bill (ONCA 21-42) for the chapel construction funding. The larger chapel will be built first before construction starts on a larger Wakon Iron community building.

More than 20 officials and community members attended the outdoor project celebration, which started with an opening prayer in both Osage and English by Osage Minerals Councilman and village resident Talee Redcorn.

“These buildings here, for a lot of us, are the center for our culture,” said Principal Chief Geoffrey Standing Bear, who also comes from the Pawhuska District and has memories, like many others of attending special and cultural events at the current chapel and nearby Wakon Iron building. Those two structures are near the Pawhuska village dance arbor, which hosts the district’s respective Inlonshka each June, as well as other occasions year-round including dinners, community meetings, holiday events, handgames, funerals and smaller dances.

Standing Bear recalled receiving his Osage name as a child when the now-chapel building was previously used as Wakon Iron Hall before the current community building was constructed. The naming was a special occasion attended by many Osages now gone, including elders who spoke fluent Osage, he recalled.

“It’s a very delicate subject to even talk about with them not being here anymore, so don’t look at it like a replacement, it’s not a replacement, it’s an evolution and our people have changed, there’s so many more of us and we still use these buildings to take care of our traditions – our deepest traditions,” Standing Bear told the attendees.

Standing Bear said the new larger chapel project comes after several meetings attended by the Pawhuska Village Committee (five-man board), Inlonshka committee members and cooks, as well as government officials. “The architects and engineers were taking good notes and thank you for that ... A lot goes into this. So we can remember all those, but we can’t stop, we’ve got to know that we want to be here 100 years from now ... I don’t like ‘replacement’, I’d like to think 100 years from now, they’re going to look back on us, they’re going to be our children, nieces, nephews and they’re going to come together here.”

During the spring session, Congress unanimously passed bills ONCA 21-42 and ONCA 21-43 (both sponsored by Congresswoman Paula Stabler) to appropriate $1.7 million and $5.7 million respectively for building costs to build a larger chapel and community building. Construction on a new Wakon Iron community building is expected to commence when the larger chapel is completed at its new location west of the current building next year.

Second Congressional Speaker Jodie Revard, also a Pawhuska District cook, applauded the village’s milestone and legislative efforts to pass the construction appropriation bill. She told attendees she also believes passing the bill upholds the 2006 Constitution, which states the Nation “shall promote and protect our language and our culture and most importantly our traditional ways of the Osage Nation ... I appreciate Congresswoman (Paula) Stabler filing (ONCA 21-42), I know she cares about what goes on in this village, as well as the (current Village Committee) and all the residents. It was very emotional; it was hard to find the words because you have to speak from your heart. Sometimes it’s hard because we have to consider our laws as elected officials.”

Speaking as a district cook, Revard said “this is much needed for our people ... It’s very personal to me, I feel very honored to be a part of this movement for a new chapel and a new Wakon Iron (community building).”

Stabler, who previously served as Pawhuska Village Committee chairwoman in two stints, said “a lot of work goes into maintaining these properties and keeping them going and keeping them available and scheduling and taking care of families, so that’s been going on for over 50 years as well. The people out here are good people and dedicated people and I want to thank the Pawhuska Village for carrying on this project and the Chief’s office and all those who participated to bring this project (to now), it’s very important to all of us.”

Stabler also reiterated: “These villages are our cultural homes, they’re the most important properties that we have and they’re what allow us to continue. We don’t need buildings, we don’t need walls, we don’t need roofs, we can dance in the grass and cook outside, but it helps us to stay together, helps us to have our community together at all of our events. Just like the Chief, I remember being a little kid in what I call ‘the little Wakon Iron’ ... you could cram so many people in there and that’s our memories and we all hate to see it go, but it’s time, just like it was time for the (prior dance) arbor so that we could have things better and nicer. And I understand part of the ceiling caved in last week, so especially now is a good time to start moving forward with this.”

Margie Williams, current Pawhuska Village Committee chairwoman, thanked everyone for attending and acknowledged her fellow committee members including Pete Bighorse, Osage Minerals Councilman Myron Red Eagle, Cherokee Cheshewalla and Fawn Cheshewalla. “It is heartbreaking that we’re tearing down that (current) chapel, it’s an older building, it’s been moved here in the ’50s, it’s heartbreaking because my uncle had my first handgame in that building, so I understand there’s memories and lots of feelings going into it when it’s going to come down. But I’m also thankful to you Chief that we’re also able to do this in two phases because I didn’t want our people to go without, so thank you,” Williams said.

Casey Johnson, director of operations for the Executive Branch, said other entities working on the chapel and forthcoming larger Wakon Iron community building projects include Wallace Design Collective, Builders Unlimited, Blue River Architects, as well as the Nation’s Tribal Development and Roads Department. “This is going to be a big deal and they do really good work and they’re familiar with our timelines, so (the chapel) will be done and ready before next June,” he said.

Afterward, the elected officials and representatives from the professional companies working on the project gathered to shovel dirt as part of the commemoration.