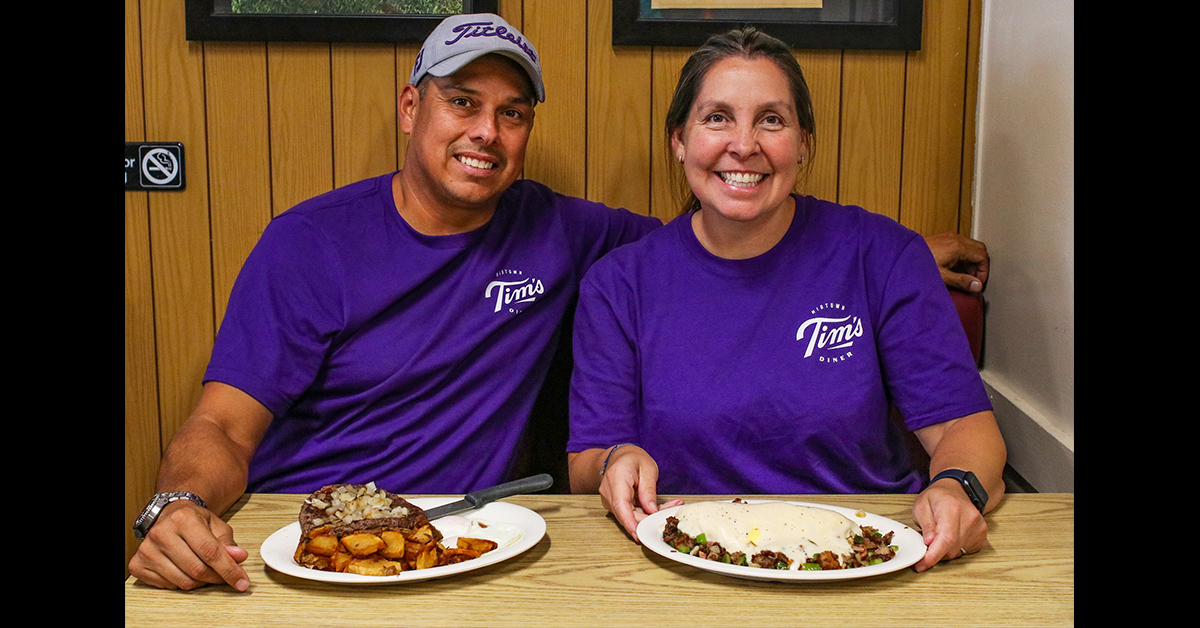 The smell of eggs, bacon, pancakes, biscuits and gravy waft through the air as patrons enjoy their meals. Behind the counter is Tim Shadlow, Osage tribal member and proud owner of what used to be Phill’s Diner. Smiling brightly and wearing a purple t-shirt that says “Tim’s Midtown Diner” in white lettering, he greets and seats his customers. His t-shirt is a nod to the Hominy Bucks he played high school football for. The phrase “Go Bucks!” comes to mind.

The diner is a staple of the neighborhood, which is located at 32nd and Harvard. When it first opened in 1976, it was called Callahan’s. Then Phill Hughes bought it in 1992.

“Years ago, my daughter Mia and I would come here to eat,” Shadlow said. “Once I came here, I loved this place – it felt like a little Hominy café.”

He said he would often joke with Hughes about purchasing the diner, but it wasn’t until last year that Hughes approached him with a serious offer. For the past 11 years, Shadlow has worked for the Indian Health Care Resource Center in drug and suicide prevention with teenage kids in Broken Arrow, Owasso and Tulsa. His wife, Dr. Joanna Shadlow, is a professor at The University of Tulsa in psychology and sees patients for the Indian Health Service. They have never run a business. But on Sept. 14, 2020, Shadlow bought Phill’s Diner.

“I bought everything, the blueprint to the business. I stepped in; the clientele was here. The regulars came in during the pandemic,” he said. “When I took the business over, I got zero pandemic relief, so we’ve had to really watch our numbers. But I look at it as we went through the hard time, and since the end of February, March, April, there’s been a steady climb. It’s been fun because I get to do my favorite thing, which is I get to talk, I get to visit, and sometimes teach.”

The menu stayed the same with some Native American and Osage fare added on.

“The difference between us and maybe some other places is we make everything in-house. We cut our own fries, everything is fresh, we don’t freeze our meat, we order three days a week,” he said. “Our specialty for our lunch items is one of our cooks is a Kiowa woman from Anadarko and so that’s why we have meatloaf, goulash, Salisbury steak. One day a month we do Indian tacos and once I perfect my meatpie skills, people will be able to call in and pick up on Fridays.”

A small debate ensues as to what a perfect meatpie consists of, but that’s normal for Osages.

On the outer walls of the diner are Norman Rockwell paintings and on the interior walls are photos of Shadlow and his family, dressed in Osage clothes. There is also a photo of Shadlow in what appears to be from the set of “Killers of the Flower Moon.”

“As far as this place goes, this community we talk a lot about the history, culture and heritage,” he said. “Especially with the movie coming out [Killers of the Flower Moon], a lot of people like to just come in and visit. They ask me about my family, different pictures.”

The two-page menu has over 150 meals to choose from, and breakfast is served all day. There are “Tim’s Favorites” to choose from and daily specials, with a notice of “Tim’s Indian Tacos” served on the last Thursday of every month.

Shadlow is at ease speaking with the diners and is intently discussing his perfect fishing spots when Osages from Pawhuska and Hominy walk in. One of them is Noah Shadlow, Tim’s nephew, and his friends Chris Cote and Jordan Poorman Cocker.

“Noah was telling us his uncle had this restaurant and we thought it was keen,” Cote said. “We decided to get up, come down here, get something to eat at an Osage-owned restaurant. We’re excited about it.”