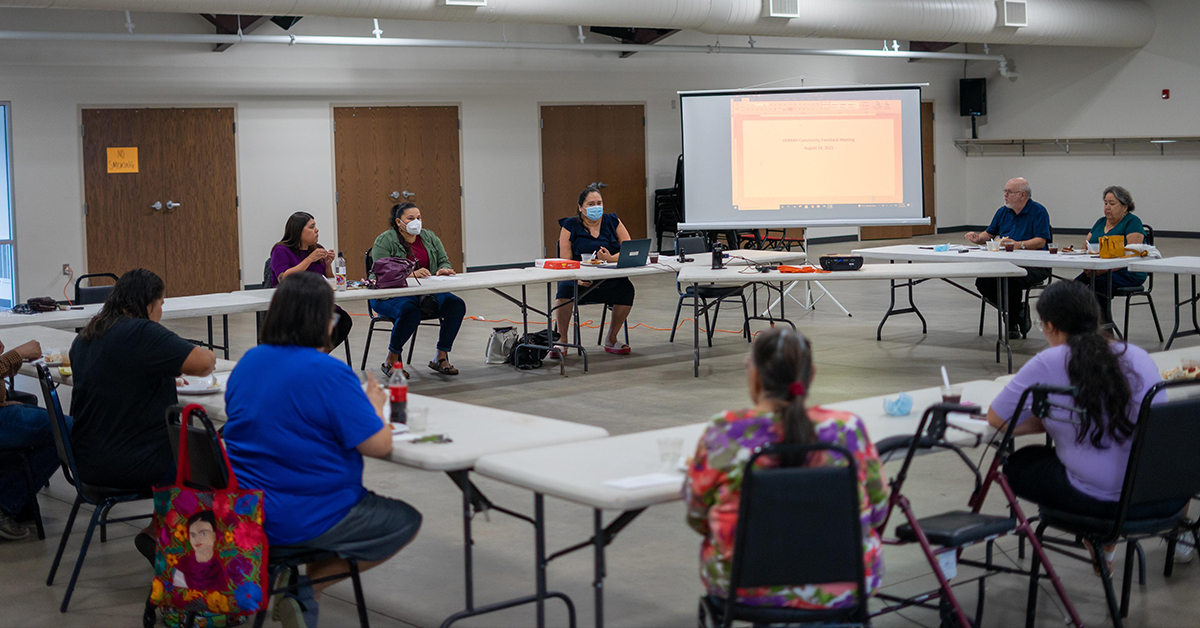 ON Museum hosts second round of meetings on expansion, renovation plans

A second round of community meetings to discuss expansion and renovation plans for the Osage Nation Museum took place Aug. 17-19 in each of the three districts to hear more feedback from the Osage public.

At the meetings, ON Museum Director Marla Redcorn-Miller reported on some findings from the first community meetings held in May 2021 at the same locations before hearing more comments from attendees. Opened and dedicated in 1938, the ON Museum is the oldest tribally-owned museum in the United States.

“Many people were interested in having a space for each of the districts to tell their stories within an exhibition space so that the history can be told from the perspective of the different districts,” Redcorn-Miller reported from the prior meetings discussion. “Another item that people mentioned was educational opportunities for children, connecting with the departments that we have for the Osage Nation and also having interactive areas within the museum space.”

During the Grayhorse community meeting, Redcorn-Miller said the feedback also expressed interest in seeing a balance of history and art in the new museum. For example, some people expressed interest in seeing an exhibit discuss more Osage history, which includes the time period before Osage ancestors came to present-day Oklahoma “and then looking at who we are today.”

Russ Tallchief said he would like to see quality standards for museum collections and preservation at the new institution especially for those families wanting to donate items to the collections. “A lot of people don’t understand you can’t accept everything and that’s a tough position to be in especially if you have to turn someone away,” Tallchief said.

Redcorn-Miller said she understood and added the Nation is fortunate to also have Traditional Cultural Advisors to make recommendations, if needed, on potential collection items. She noted the discussions and inquiries also touched on storage space, which is crucial because the current museum space is deemed “too small” by many community members, including those with a museum and artistic backgrounds.

Wendy Ponca said she would like the museum to be a storytelling place that includes a theater that could showcase artists, musicians, films and space for studio use. She said the museum space serves as an opportunity to bring in diverse artists, writers, painters and sculptors “as a place for artists to express themselves,” she said.

Tara Damron said the museum should serve as a “basic introduction from us, by us and told by us” to target visitors who know nothing about the Osage people.

At the Hominy community meeting, Angela Toineeta also echoed previous comments on the current museum’s small size, and she would like to see more programming and events to draw more people to the museum.

Timber White commented on behalf of her grandmother stating “she didn’t want anyone to touch the (current) museum building as it was ... She’s very adamant about the museum the way it is now. She likes it the way it was because it’s how it was whenever she was young.”

Welana Queton commented she would like the new museum design to include a reflection of the Osage worldview whether in the building or outside grounds. Queton added she would like to see Osage women highlighted more such as discussing cooks and having a cooking area with fire at the museum.

Cynthia Moore said she would like to see an exhibit and more information detail on the 10 Osage portrait busts including their biographies and family descendants.

At the Pawhuska community meeting, Celena Noear said she also would like to see a learning venue where people can learn more about culture, including how to make cradleboards and moccasins. She also added she would like to see more collection item rotations so more items can be displayed.

Jennifer Tiger asked Redcorn-Miller about the current museum’s space, which she responded that the museum is using storage units to store items due to lack of space. Tiger said spacing should be at the top of the priority list “so things aren’t in jeopardy” as well as site planning for the grounds.

Redcorn-Miller said the process is at the interpretive plan phase and not the design phase yet, adding another meeting will be held later with the professional consultants working on the planning for the museum project.

Follow the “Osage Nation,” “Osage Nation Museum” and “Osage News” on Facebook for events and updates on the ON Museum when available.