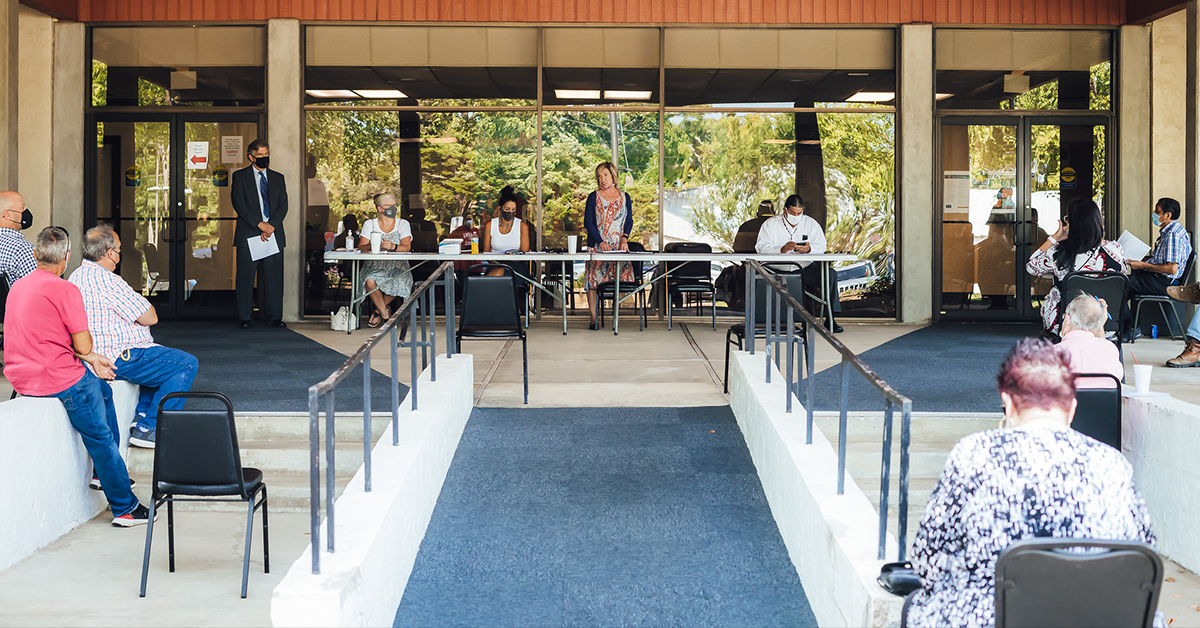 The Osage Minerals Council held a lease sale on Aug. 9, the first lease sale since the beginning of the COVID-19 pandemic. CODY HAMMER/Osage News

The Osage Minerals Council held a special meeting after a lease sale on Aug. 9. The lease sale caused mixed emotions for the council. Some called it “illegitimate” and “non-competitive,” while others applauded the sale and called it “a good thing.”

Councilwoman Margo Gray made the motion that said in part, “The Osage Minerals Council at a meeting following this sale has carefully reviewed the schedule showing the track sold and its consensus that the leases offered by fair value and the consideration in the instances are adequate. Therefore, be it resolved, that since the bonus offered by the respective purchasers of leases appears to be adequate and represents a fair value of each and every lease. The sale as a whole is accepted. And that the superintendent is requesting to notify all successful bidders that their bids have been accepted and direct them to furnish accomplished leases on departmental forms within 20 days after the notice of the acceptance of the bids. And the chairperson of the Osage Mineral Council is hereby authorized to execute leases to successful bidders.”

Councilwoman Susan Foreman said the lease sale was not competitive. “With all of the questions that we had concerning this lease sale there’s just no way that I can support selling these leases at a non-competitive minimum rate, therefore I will not be supporting it,” she said.

Councilman Talee Redcorn acknowledged the low prices, noting that in 2007 a lease sale would go for $116 per acre with barrel prices at $65, while in 2021 the highest bid was $29.49 per acre with $65 a barrel. However, he said that Gray made the motion to have the lease sale.

“We fought long and hard with our committees, we got these on, and we sold them. A little bit of hiccup there but that’s the way the world is going to be in my view of the Osage,” Redcorn said. “We did the best we could, heard everybody, even heard from the BIA there, and we had to weigh a lot of things, but I think at the end of the day it sells the leases and I think it’s a good thing.”

One other council member disagreed with the lease sale. “I think that this lease sale is illegitimate. There wasn’t proper notice, there was no competition,” Councilman Paul Revard said. “You’re asking us to approve a resolution to accept the results of the lease sale without giving us any information. We don’t know what tracks got sold, to who, for how much, so therefore I will be voting no for those reasons and more.”

Less than 20 people attended the lease sale, with three people bidding on the tracts. The rest of the audience were BIA employees, Osage shareholders or council members.

The motion to approve the lease sale passed 5-2, with Councilwoman Marsha Harlan stating, “Any sale is better than none.”