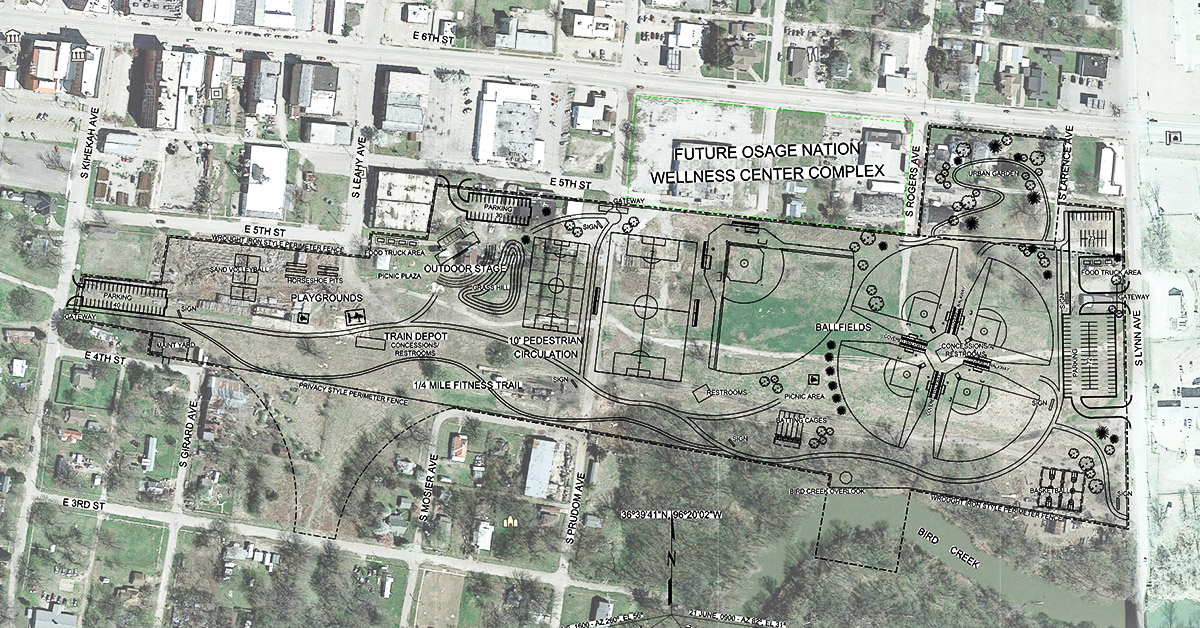 A concept drawing for an Osage Nation Public Outdoor Health Complex project shows multiple ballfields and an outdoor stage. The layout of the park could still change pending the acquisition of more property. Phase one of construction will require remediation of any soil areas that contain harmful contaminants as well as historical surveys, followed by demolition, then construction, according to ON Director of Operations Casey Johnson. Courtesy Photo

The Osage Nation is continuing its land acquisition efforts in Pawhuska to make way for a new health complex on the city’s south side.

On Sept. 22, Principal Chief Geoffrey Standing Bear signed documents closing on a property located at 508 E. Main St., according to a news release. The property acquisition is part of a series of strategic purchases to make space for an Osage Nation Health Complex.

The property was previously owned by Eugene J. Smith, Jr. and Mark S. Smith, Jr. Standing Bear signed the documents on behalf of the ON Health Authority Board, which is working on the land acquisition negotiations with the Executive Branch, including Assistant Principal Chief Raymond Red Corn.

“This is the next to last property to be acquired for the complex,” Red Corn said in the release. “This purchase, along with other previous purchases, will result in Osage ownership of all property on the south side of Main Street, from Lynn Avenue to Prudom Avenue. We appreciate the community supporting our efforts as we work to create a much-needed health complex for this area.”

Red Corn also acknowledged the Health Authority Board for its work on the plans thus far. “The Osage Nation Health Authority Board worked diligently with Executive leadership in negotiations for these properties. The efforts of Chairwoman (Cindra) Shangreau, Cecelia Tallchief and Michael Bristow over the past year are recognized as we approach the end of the acquisition process for these properties,” he said in the release.

The latest land acquisition comes as the Nation seeks more grant funding to build the health complex featuring sports and recreation amenities as part of improving health for those living on the Osage Reservation. On Aug. 19, the Executive Branch hosted a public input meeting regarding the proposed outdoor health complex and sought feedback through an online survey that has since closed.

At the input meeting, the Executive Branch said it has accumulated $7 million from various sources for a health complex and is applying for a grant through the Oklahoma Department of Tourism and Recreation for more funding.

According to the 63-page Public Outdoor Health Complex Survey response report, 331 people completed the survey and the responses were overwhelmingly in favor of the health complex. The questions ranged from whether respondents felt there were adequate opportunities for outdoor physical activities for youth and adults within the area (such as ballfields, playgrounds, etc.) to whether respondents’ families would go see a performance at an outdoor pavilion.

A letter of support from Oklahoma Lt. Gov. Matt Pinnell was sent to the Osage Nation on Sept. 27. He said a community outdoor health complex would provide space for the public to practice and play, offering enormous physical, social and mental health benefits.

“The initial plan includes sports fields, playgrounds and other public amenities this will give the citizens of Osage County healthy and exciting opportunities to participate in healthy recreation outside of their homes,” he said. “Oklahoma has already seen the positive effects of Outdoor Health Complex facilities in cities such as Broken Arrow, Owasso, and Tulsa. Each of these cities saw a positive increase in physical and mental health, while also providing an opportunity to recover economically by generating revenue for small businesses and aid impacted industries such as tourism, travel, and hospitality.”