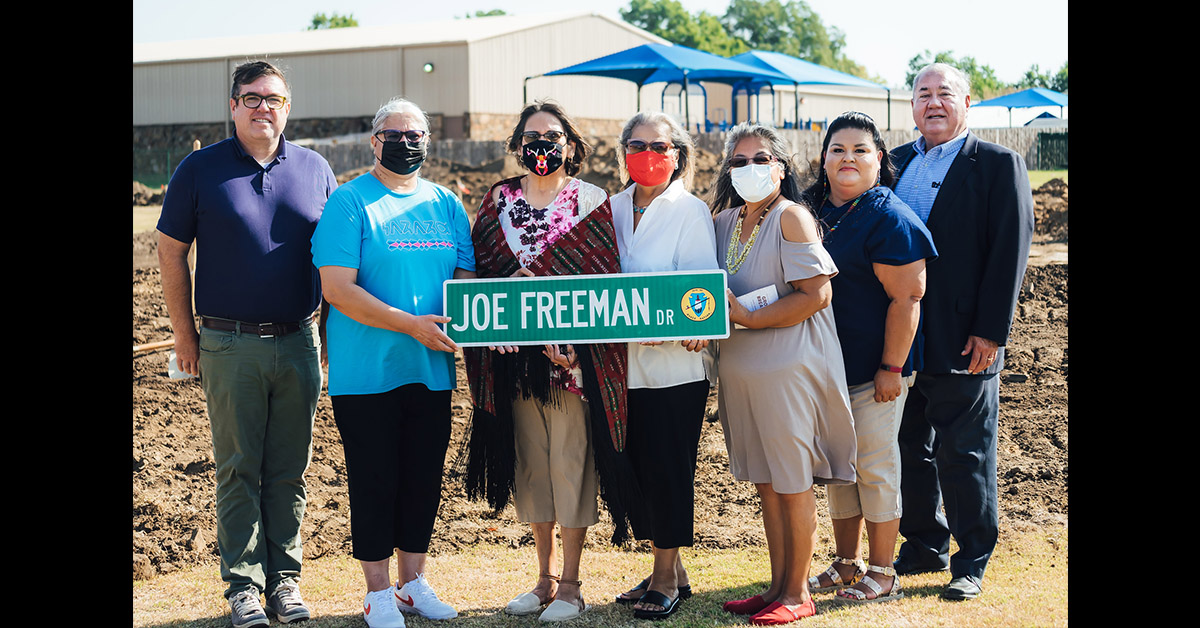 From left: James Weigant, Kim Freeman, Ann Freeman, Belle Wilson, Regina Hill, Andrea Kemble and Principal Chief Geoffrey Standing Bear. Joe Freeman Drive is in honor of Ann’s late husband who worked for the Nation for 20 years and was the Housing Director at the time of his passing. CODY HAMMER/Osage News

Next year, the Osage Nation Senior Housing Complex in Pawhuska will have 10 additional units to increase housing opportunities for the Nation’s elders.

ON officials and community members ceremoniously broke ground on the additional senior housing units project in Pawhuska on Sept. 14. The units will be added to the current complex also known as “Senior Circle.”

Five duplexes, for a total of 10 additional housing units, are being built, according to an Osage Nation press release. The additional duplexes will be located on the empty cul-de-sac just north of the Title VI (Elder Nutrition) building, as well as the cul-de-sac to the northwest of the complex. Funding from the Indian Housing Block Grant (IHBG) funds and American Rescue Plan Act (ARPA) supplements will be used to fund the expansion.

“The care and respect of our elders is a top priority at the Osage Nation,” said James Weigant, who is the Nation’s COVID-19 Task Force Coordinator. “Not only are we demonstrating that priority by building 10 more homes here in Pawhuska, but thanks to the American Rescue Plan, we will soon be expanding elder housing in both Fairfax and Hominy with 20 units at each location.”

Weigant delivered comments that morning at the project construction site with attendees including family members of the late Housing Department Director Joe Freeman. A new street built for the expansion will be named Joe Freeman Drive in remembrance, Weigant told the ON Congress during the 2020 Tzi-Zho Session.

That morning, Weigant unwrapped a new street sign bearing Freeman’s name as part of honoring him for his 20-plus years work for the Nation. Freeman passed away on July 9, 2019.

“One of the biggest proponents of elder housing was our former Housing Director Joe Freeman, these elders were his people and he took that priority to heart,” said Weigant who formerly worked along with Freeman. “Seeing these 50 new housing units built across Osage County would’ve made Joe proud and I hope he’s smiling down on us now.”

“There could only be one Joe Freeman, Joe gave over 20 years of his life to the Osage Nation housing programs,” Weigant added. “Over that time, he became a virtual logging encyclopedia of federal housing regulations. Working that long in tribal government, Joe knew how things actually worked in the real world and in Indian Country. He was an invaluable resource, he called a spade a spade, I always wanted to hear his takes on things in both work and life. Joe left us too soon, we were not able to throw that retirement party Joe would’ve greatly deserved. Today we express our profound thanks to Joe and his two decades of service to the Osage people by naming a street in the senior housing expansion after him.”

Freeman’s wife Ann, along with their daughters and other family members, attended the event and Ann helped Weigant unwrap the new street sign that will soon be a part of the new senior housing addition community.

Attendees applauded and lulu’d as the sign was unwrapped.

Andrea Kemble, who now serves as Housing Director, applauded the occasion, adding: “By expanding our housing here in Pawhuska, we’re able to keep our seniors safe in affordable housing, bring culture to the community and I just want to say it’s a collaborated effort of many employees and many stakeholders at play here. And we look forward to the groundbreaking in Fairfax – we believe that might be a month out – but we’ll be able to break ground there … and we certainly appreciate our leadership and their support, Congress, Executive, all of our government here.”

ON Director of Operations Casey Johnson will oversee the construction management team, Tulsa-based Builders Unlimited, throughout the project, according to the release.

“We anticipate that these units will be available in late spring, early summer 2022,” Johnson said in a statement. “However, with all construction projects, Mother Nature, availability of construction supplies, and other unforeseen circumstances, will have a vote on the timeline.”

For more information on senior housing and other services, visit the ON Housing Department online at: www.osagenation-nsn.gov/services/housing