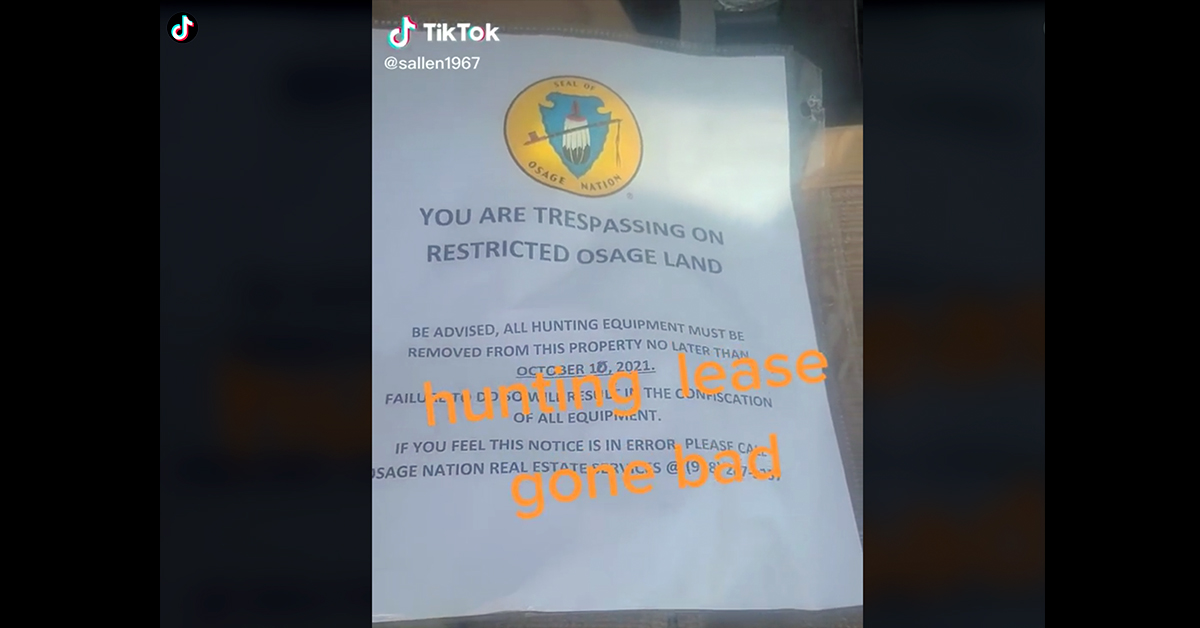 When Steve Allen posted a TikTok video expressing his frustration about having to remove his hunting equipment from restricted Osage land, he never thought it would have the reaction it did.

“Lord, I didn’t know that was going to happen with that video. To start with, I can’t believe the racism out there,” Allen said. “There are some ignorant people in this world. It’s just really sickening to see some of the comments on there, and then there are some comments that are completely great.”

Allen, 54, said he made the mistake of trusting a family friend about a piece of property he and his sons hoped to use for bow hunting. He was told it had been leased for three years with the potential of a 10-year lease. After paying his friend $3,500 and setting up his hunting equipment, Allen was soon notified to vacate. Turns out, the land was not legitimately leased and that it was restricted Osage land. A note from the Osage Nation Real Estate Services was posted on his hunting equipment to have everything removed from the land by Oct. 10 or it would be confiscated.

On Oct. 10, he dismantled and loaded up his equipment in 94-degree heat, he said. Upset by the entire situation, he decided to post a TikTok video on his account @sallen1967. He knew his friend would see it. But what Allen didn’t know was how people would react.

“What the hell do you do when the Indians tell you to get the hell off their land? That’s exactly what you do. You get the hell off their land,” he said in the video. “We were supposed to have this thing for 13 years and this son-of-a-b***h has screwed us over, didn’t make the deal with the Indians like he was supposed to do. So now then, here it is, second week of bow season and instead of huntin, I’m down here trying to move all my sh*t off of this damn land so I don’t go to jail.”

Allen’s hunting equipment was located on restricted Osage land, which is owned by individual Osages and not the Osage Nation. The difference is individual Osages own title to their property and they are involved in the leasing process; ON Real Estate Services processes the leases, collects funds and monitors the land for the individuals, Yates Free said. The Osage Nation owns trust land, restricted land, and fee simple lands; all leases for the Nation are signed by the Principal Chief and are subject to the Nation’s laws and policies, she said. All restricted and trust lands are subject to the 25 CFR regulations.

“If you want to hunt in Osage County – double-check, triple-check that the land is not in restriction, trust, or fee simple with the Osages or Osage Nation,” Yates Free said. “Undivided interests that include a mix of non-Osage and restricted Osage land are still subject to federal regulation and we will assess trespass for usage of that restricted Osage interest. We are here to serve our People and protect our lands.”

Be careful of fraud

Allen said he was never angry at the Osage Nation, he was angry at his friend for having lied to him. He said he contacted ON Real Estate Services and told them the situation. He called the Osage Nation Police Department in case there was any misunderstanding about his equipment. He said he will not press charges, but he has lost a family friend.

Allen, who owns his own asphalt company and whiskey distillery where he makes Muscogee Mash Whiskey, will be hunting soon with his sons. He said ON Real Estate Services has contacted him and found a piece of property for him to hunt on.

“As far as everyone in the tribe they’ve been nothing but nice and respectful and very easy to work with, especially after they found out I was lied to,” he said. “My only word of advice to anybody, no matter how much you trust somebody, especially when it comes to hunting, make sure you review the hunting lease. Make sure there is insurance, make sure that all the T’s are crossed and all the i’s are dotted. It protects you, the landowner and the tribe.”

For more information or confirmation on whether lands are restricted, trust or fee simple, contact ON Real Estate Services at (918) 287-5257 or email them at realestateservices@osagenation-nsn.gov