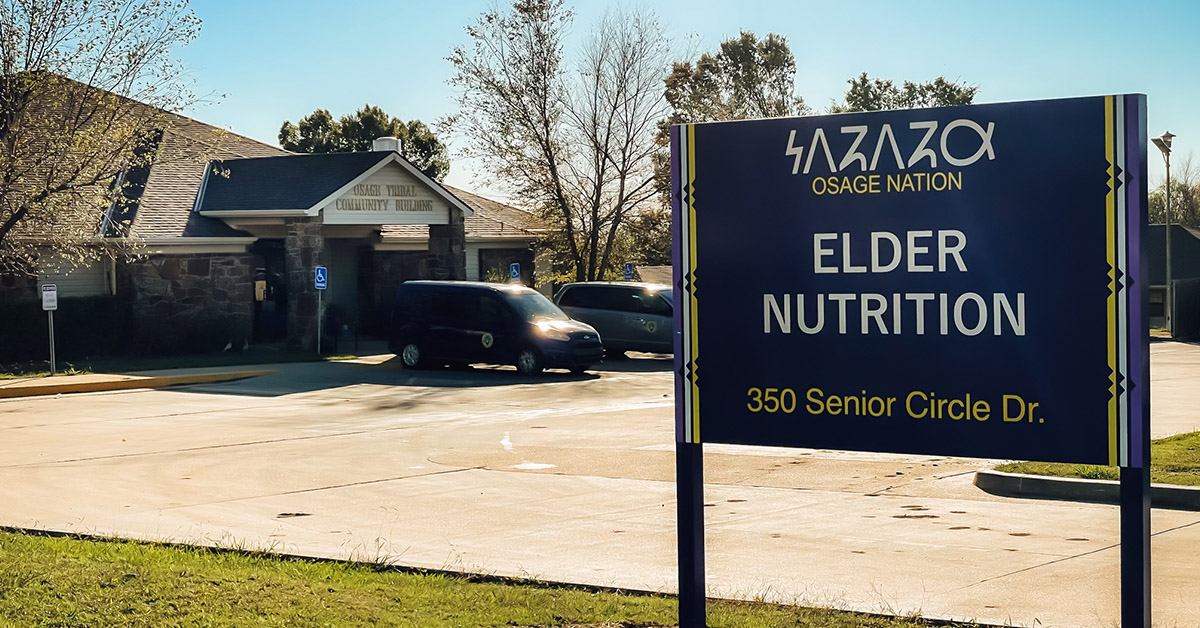 The Elder Nutrition program is located on the Osage Nation campus in Pawhuska. CODY HAMMER/Osage News

For nearly a month, homebound elders on the Osage reservation have had their meal deliveries interrupted after two employees abruptly quit and one was out for medical leave. Now that the employee vacancies have been filled one problem remains, how to ensure the interruption doesn’t happen again.

“We’ve always been shorthanded,” Slinkard said. “I’ve asked for additional employees ever since we opened up the Fairfax center, for extra help. If we had the two extra employees, this never would have happened.”

“As you know over a month ago members [of Congress] received calls from families and their elders had not been receiving meals for days ... there was then a request for volunteers to help deliver but again I’ve heard that even last week that some of our homebound elders did not receive a lunch for at least 3 days,” wrote Goodfox in an email to her colleagues and the Office of the Chiefs on Oct. 19. “Our most vulnerable ... homebound elders. I cannot in good conscience go into a special session to appropriate dollars when we are not getting meals to our elders. There should NEVER be a disruption in service to our homebound elders ... ZERO disruption. They do not need to hear ever ... ‘we have no drivers, no workers, no volunteers, no this, no that, people quit abruptly, etc.’”

“They should never feel like they are a burden. There is not one thing on this Special Session Proclamation that is more important than our elders ... nothing! If anyone wants to co-sponsor the bills I have great ... or if anyone wants to help deliver meals that would probably be appreciated also.”

The next day, employees from the Social Services department showed up to volunteer and Goodfox attended the special session.

Congressman Eli Potts sponsored the bill ONCA 22-07, an act that would authorize and appropriate $92,012 in ARPA funds to the Elder Nutrition program to fund two additional employees. Congresswoman Brandy Lemon said she planned to introduce a similar bill, but she would use tribal funding. Potts’s bill was tabled pending an upcoming meeting on Friday, Oct. 22, between the Osage Nation and the Osage County Nutrition office. Congressional Speaker Angela Pratt contacted Principal Chief Geoffrey Standing Bear with the idea after learning that the Elder Nutrition program in Fairfax partners with the Osage County Nutrition office.

Slinkard said they used to partner with the Osage County office when she first started working there, but the county office pulled out of the partnership and that’s when they began cooking and delivering their own meals.

Slinkard said the disruption came when two employees abruptly quit and her cook was scheduled to be gone for a week following surgery. During that week they delivered “shelf-stable” meals, she said, “something they can put in their cabinet or eat that evening.” Her plan was to have an emergency hire to temporarily fill the positions but learned no one was available.

When the coronavirus pandemic hit last year, her workers were still entering homes to deliver meals and then learning afterward that someone may or may not have had Covid-19. The workers stopped going inside the homes after that and asked that the elders have an ice chest on their front porch for the worker to leave their meal in, to keep it warm.

When the two workers quit, one of them was the person who made the deliveries. She said that person knew where everyone lived, had a rapport with the elders, knew their schedules in some cases. She said the elders who reported not receiving meals were probably the days the volunteer deliverers couldn’t find an address or assumed the person wasn’t home and left.

“I take care of our homebound elders. Today we served 54 homebound and sometimes it’s 58. When winters come on, we’ll increase our numbers,” Slinkard said.

She said the department is now fully staffed, but they are still in need of two additional employees.

“Sometimes we’re the only people they see and we’re doing our best to take care of them and protect them and make sure they have a well-balanced meal every day, and a hot meal,” Slinkard said. “I heard our meals were arriving cold and just were not any good. I would put our meals up against any Title VI meals across the United States. We’re very fortunate we get to purchase our food and fresh produce, and we get to serve them a good variety of food and meals.”