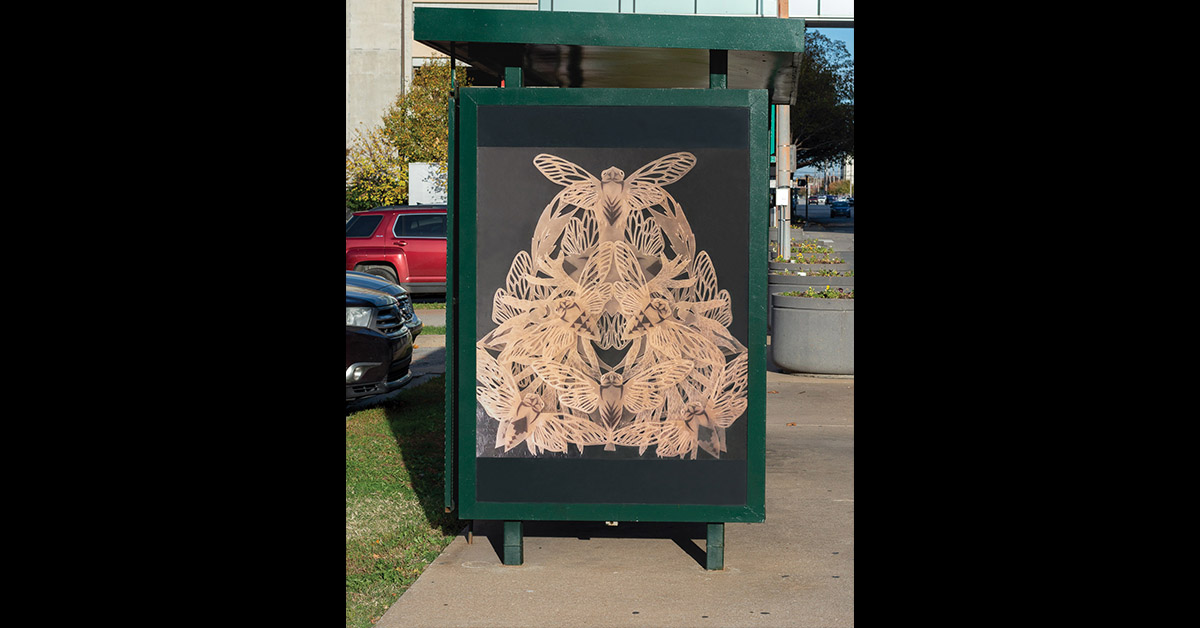 Tulsans are getting a daily dose of Native American artwork through a project called Add Space. Created by Tulsa Artist Fellow Richard Zimmerman and made possible by the Tulsa Artist Fellowship, it brings artworks to public spaces traditionally used for advertising.

The fourth iteration of the project is bringing Native American artwork to these public spaces and Zimmerman asked Osage artist Anita Fields to curate.

“When asked by Richard Zimmerman to curate a series of his Tulsa Artist Fellowship Add Space series, I immediately imagined filling billboards and bus shelters with art by contemporary Native artists,” Fields said in a statement. “Oklahoma is home to 39 tribes, tribal members from many different Nations reside in the urban landscape of Tulsa, yet our presence remains invisible.”

“A large area of Tulsa is located on the land of the Muscogee Nation. Boundaries of Tulsa encompass the lands of the Osage, Cherokee, and Muscogee Nations,” she said. “Traveling On Native Lands reminds viewers who pass by the billboards in their vehicles and wait at bus shelters to board buses as transportation that they are moving through Native land.”

The artists selected provide glimpses into the thoughts, observations, joys, sorrows, and nuances of their respective communities, she said.

“The presented works of the Indigenous artists represent a continuum of refined Indigenous belief systems, social constructs, complex issues faced by Native people, and organized worldviews that challenge a colonial mindset,” Fields said. “Native ways of being reside deep in the hearts and minds of the participating artists. The red earth of Oklahoma holds the memory of our diaspora and arrival into Indian Territory. Our art and stories are pertinent components of our survival; something to consider as you travel the roads past billboards and bus shelters with imagery related to Native people.”

For more information on “Traveling On Native Lands,” visit addspacetulsa.com