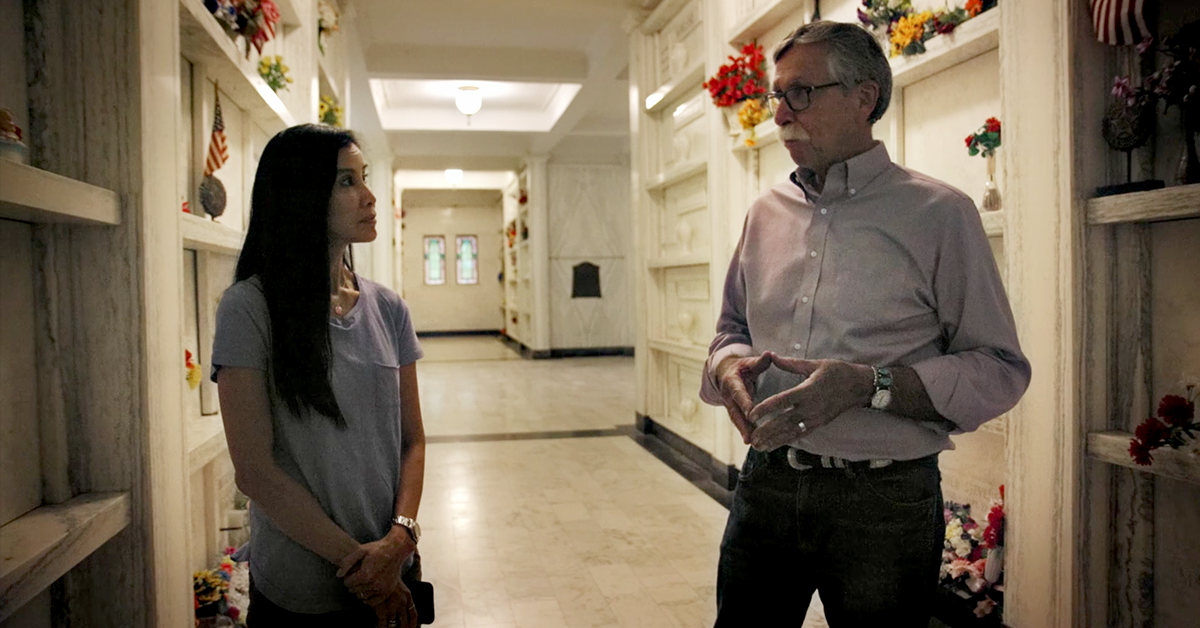 ‘This is Life with Lisa Ling’ explores Reign of Terror, speaks with Osage families

Joe Conner speaks to TV Journalist Lisa Ling in the Pawhuska Cemetery mausoleum about his ancestor Sybil Bolton, who was murdered in 1925. Osage News Screenshot

TV Journalist Lisa Ling sat down with nine Osages last year and discussed the Reign of Terror, its impact 100 years later and the future of the Osage Nation for her CNN series, “This is Life with Lisa Ling.”

The Reign of Terror was a period during the 1920s when Osages were systematically murdered for their oil wealth and land. However, Osages continued to die mysteriously for many years after. The result: headrights and land leaving Osage ownership.

The episode premiered on Nov. 28 on CNN and is part of the series’ eighth season. “This is Life with Lisa Ling” can be streamed on Amazon Prime, Google Play, Vudu and iTunes. Helping to produce the Reign of Terror episode with Ling’s crew was Osage artist and activist, Ryan RedCorn.

Gray and his son are the descendants of Henry Roan, an Osage man from Grayhorse who was killed in 1923 for his life insurance. His murder was orchestrated by a white man named William Hale. Gray also spoke about his tenure as Principal Chief during the transition from the Nation’s old tribal council form of government to the new three-branch government. The transition brought the Osage into an era of self-determination. Gray was chief from 2002-2010.

Sean Standingbear and his sister Meg showed Ling the films their grandfather Eugene and grandmother Mary made with their 16-millimeter film camera. Many Osages had great wealth during that era and their grandfather owned his own plane, they wore furs, drove nice cars and sent their kids to the best schools.

Damron, who is the director of the White Hair Memorial, was interviewed in Grayhorse at the Mason home. She spoke about the murders of four Osage women in one family. Three sisters, Minnie Smith, Anna Brown, Rita Smith and their mother Lizzie Q, were all strategically murdered so their headrights would be inherited by their fourth sister, Mollie Burkhart. Her white husband Ernest and Hale, his uncle, were going to kill her so Ernest would inherit her headrights. However, the fledgling Federal Bureau of Investigation arrested them first. This would be the first official case that would form the FBI.

Conner told the story of Sybil Bolton, his great aunt who was found dead at her home in Pawhuska in 1925. Sybil’s story is told in the book “The Deaths of Sybil Bolton,” written by her grandson Dennis McAuliffe Jr., who is an editor at the Washington Post. Conner said for decades the family thought Sybil had died of natural causes, but after McAuliffe began researching her death, he found she had been shot and suspected her guardian of the murder. He found out her stepfather A.T. Woodward was her guardian and was most likely the person who murdered her. Woodward was also guardian to four other Osages, who all died young. Woodward was never charged with any crime.

Ling interviewed current Principal Chief Geoffrey Standing Bear about his efforts to buy back the Nation’s reservation lands. During the Reign of Terror, many Osages were swindled out of their land by bankers, attorneys, guardians and ranchers. Standing Bear said buying the Nation’s land back is important and spoke about his administration’s purchase of what is now the 43,000-acre Osage Nation Ranch.

Shaw tells the story of the 1921 murder of his great-grandfather Joseph Bates in Grayhorse, who was poisoned with strychnine by Hale and his associates over a tract of land. He left behind six children under the age of 16. He also invites Ling and her crew to their family camp in Grayhorse where they are fed an Osage meal. Since the episode was filmed in 2020 during the height of the Coronavirus pandemic, cultural events were not taking place. Shaw’s family dressed in their Osage clothes and Ling’s crew took portraits for the episode.

Ling is a journalist who has been in the public eye for more than 20 years. She’s a former co-host of the ABC daytime talk show The View (1999–2002), a former host of National Geographic Explorer (2003–2010), and a former special correspondent for The Oprah Winfrey Show.

Ling told the Los Angeles Times that season 8 of “This Is Life” is about events in history, “darker chapters of the country’s past” that are not taught in classrooms.

“What a terrific honor to have been welcomed into the homes and lives of some Osage in Oklahoma. Theirs is a history that needs to be told and understood because it’s part of all of our history,” Ling said. “I will never forget my experience with the Osage people.”