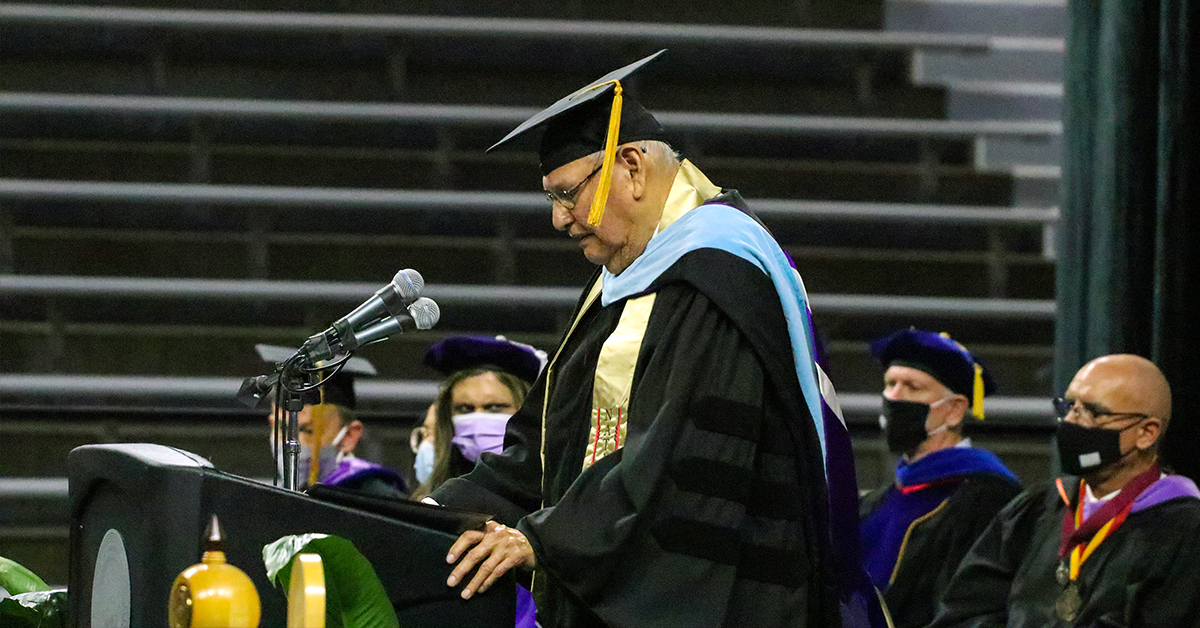 Lookout, 80, is the first person in KSU history to receive an honorary doctorate from the College of Education. He is also the first Osage to deliver a commencement address at a KSU commencement ceremony, and he gave it entirely in the Osage language. The ceremony took place on Dec. 10.

Before Lookout’s address, he was introduced by KSU President Richard Myers and then a short film of his life was shown to the audience. The film ended by saying Lookout was among the most knowledgeable people on the planet in his specific content area of expertise and for bringing a language back to life for his Osage people.

“An honorary degree is one of the highest honors a university can bestow and thus is reserved for those who’ve contributed in a very significant way to advance the quality of life for our citizens and the world,” Myers said. “It is therefore with honor and great pride that Kansas State University recognizes an outstanding leader, Herman Mongrain Lookout.”

A standing ovation was given as they placed a doctoral hood on Lookout and presented him with his honorary degree in education. Lookout stepped up to the podium and took off his face mask to speak.

He spoke in Osage and never faltered. He ended by saying, “Thank You very much.” Then, Claudia Petrescu, Vice Provost for Graduate Education and Dean of the Graduate School translated his address:

“I am Wah.Nah.She Zhi^.Kah, Little Soldier Who Gets What He Wants. This name was given to me by my father, his name was my grandfather’s name. I am of the Bald Eagle Clan, and I live my Osage ways. I have brought my family and some relatives with me to witness this great honor being bestowed upon me for my work with the Osage language. I am very appreciative of this honor and want to tell all of you Thank You.

There to witness the momentous occasion were members of Lookout’s family, his children, grandchildren and his wife Judy. Principal Chief Geoffrey Standing Bear, along with Language Department Director Vann BigHorse, who played a role in Lookout’s honorary doctorate, plus Osage citizens and friends attended the ceremony.

“It was bigger than I expected. A lot bigger. I really felt honored and humbled. Leading up to it, they were very nice to me. I met a lot of the alumni and faculty, ate lunch with the president and his staff and they were very nice,” Lookout said. “Alex (Red Corn), he was super. He made sure I was there and made sure I was in the know about things that were going to happen and kind of told me little things that I needed to know. It was pretty big.”

Dr. Alex Red Corn is an assistant professor of education leadership at KSU and played a role in Lookout’s distinction.

“It was an honor to host the Lookout family on campus for K-State’s commencement ceremonies, and I felt an immense sense of pride in hearing him address the crowd in the Osage language, a language spoken on the plains of Kansas long before our university existed,” he said. “The nomination came from the College of Education, and since it was the graduate commencement ceremony, he spent time with Dean Mercer from the College of Education and Dean Petrescu from the Graduate School during his time here … as well as the President and Provost.

“During his time on campus, he left quite an impression on K-State faculty, staff, and students.”

Lookout is one of seven remaining full blood Osages and is the grandson of Chief Fred Lookout. He is credited with leading the team that developed the Osage orthography, as well as the team that reached out to Google to make the orthography into Unicode. Their efforts made it possible for Osages everywhere to write the orthography on any digital platform.

Lookout has been teaching with the Osage Language Department since its founding in 2003. During his time at the department, Osage language classes have been taught in up to seven sites across the reservation, in four high schools and on Zoom for Osages living coast to coast. In 2012, Lookout was selected as an honoree for the AARP Oklahoma Indian Elder Honors and in 2015, the Fourth Osage Nation Congress commended Lookout for his leadership of the Osage language department and the revitalization of the language.