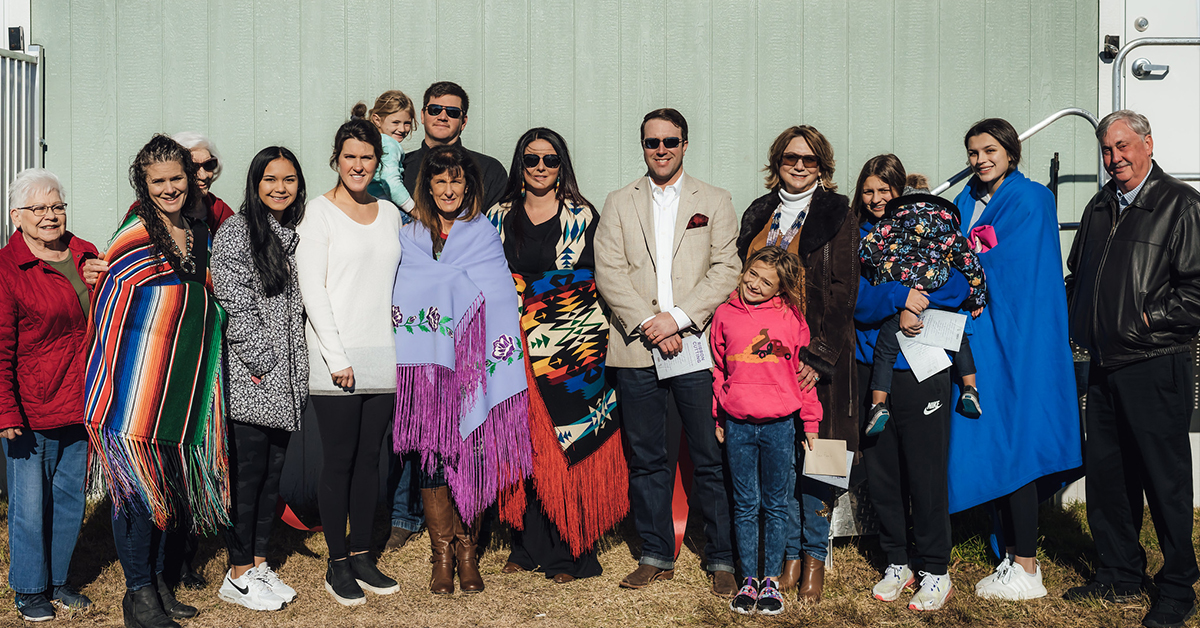 The event also served as a dedication of the newly named George W. Pease III Technology Center, which is the community internet room named after Pease, who passed away last month. Family members of Pease, a former Grayhorse Village Committee chairman, were on hand for the ribbon-cutting and honoring. CODY HAMMER/Osage News

On Dec. 8, the Osage LLC and its subsidiary Osage Innovative Solutions hosted a ribbon-cutting for the Grayhorse Village broadband project. Approximately 30 people from the Fairfax and Grayhorse communities, Osage Nation government officials and LLC officials and project workers attended the outdoor event.

The event also served as a dedication of the newly named George W. Pease III Technology Center, which is the community internet room named after Pease, who passed away in November 2021. Family members of Pease, who served as Grayhorse Village Committee chairman, were on hand for the ribbon-cutting and honoring.

“It’s only fitting we dedicate this facility to Mr. Pease’s name because he was incredibly helpful in bringing this facility to fruition,” Dr. James Trumbly, director of Osage Innovative Solutions, said during the event. “This was very important to him, I can honestly say that without his dedication and help, we would not be standing here today.”

The Grayhorse broadband internet project was made possible through a Community Connect grant awarded to the Nation, which was issued through the U.S. Department of Agriculture Rural Development program. Another similar broadband project for the Bowring area is in the works and is also federally grant-funded.

“This dedication is only the beginning of what OIS and the Osage Nation are planning to bring to our people,” Trumbly said. “With the opening of this technology center, we now have fiber optic high-speed broadband in the Grayhorse village ... And the Community Center, it’s also available in the chapel. In the next few weeks, we’ll be installing the wireless equipment that we have on the tower that will have available high-speed broadband to all of Grayhorse. In the next few months, we’ll make it available to the Grayhorse village residents through FTTH - that’s Fiber To The Home – so you’ll be able to get fiber optic speeds directly to your house.”

In the meantime, Trumbly said the George Pease Technology Center is now open with hours of operation that are Monday - Friday, 8 a.m. to 6 p.m., and Saturday, from 9 a.m. to 5 p.m. “The (center’s information technology) staff will be working with you to help you with all of your technology questions and struggles I know all of us have with technology.”

The technology center future plans also include computer classes for community members, Trumbly said “to help you learn Microsoft Office, Word, Excel, Powerpoint, Google docs and things like that, so all of that stuff is coming.”

Frank Freeman, Osage LLC chairman, said several entities and individuals helped bring the project to reality from 2015 when the grant was written and the project was able to get extensions. Freeman acknowledged work efforts by the Nation’s strategic entities including strategic planning and grants, Historic Preservation Office, Department of Natural Resources, Real Estate Services, as well as the Grayhorse Village Committee.

Freeman also acknowledged working with Pease who helped ensure the community room installation was a success with utility hook-ups “and whatever we needed and we appreciate him very much for that. It’s been a long time coming, we’ve got a lot of other monies coming from the federal government and grants that will be helping build out the infrastructure.”

“We’re fortunate to have (internet provider company) AtLink working with us. We’ve signed an MOU and we have agreements with them, they will actually be taking the business part of this where they’re getting the fiber to the homes ... to start building this as a business where we can keep it going,” Freeman said.

Based in Oklahoma City, AtLink Services serves “over 15,000 Oklahomans, making us the largest fixed wireless internet service provider in the region,” according to the company’s website. “AtLink also was awarded several USDA Broadband Initiatives Program grants to provide internet service for the next 25 years to unserved and underserved regions in Oklahoma.”

“They’ve agreed to be our sub-contractors and help us with the operations,” Trumbly said of AtLink Services. “They have over 16 years experience operating and managing effective and profitable businesses. And that provides internet services to residences, businesses, schools, offices, government offices throughout Oklahoma.”

Trumbly acknowledged Oklahoma City-based telecommunications firm ACRS 2000 Corp., which has worked with the Nation on the project. James Lightfoot, CEO of ACRS, served as the project’s design engineer who “helped us to design the network, navigate the requirements which are not always easy and helped oversee construction,” Trumbly said.

“This mission for broadband throughout the Osage Nation and Osage County started with a broadband feasibility study we prepared well over five years ago that was also a team effort with (ON entities) and we were able to acquire two federal grants thanks to our friends with USDA’s World Utility Service, these were Community Connect grants we obtained, one for Grayhorse and one for the Bowring community. Each of those grants were worth $3 million a piece, in addition to the 15% matching that was donated by the Nation.”

“This system will also allow for use of the technology center, as well as working from home, whether that’s a home-based business of their own or working for a technology company out of New York or San Francisco, they can do that right here in Grayhorse while staying here at home,” Lightfoot said. “Telemedicine is another benefit as we’ve all seen through the last couple of years suffering through the COVID pandemic, that’s definitely not just a luxury, but a need these days. (Also) conducting schooling online, homeschooling, all that can be done now with this broadband system at Grayhorse.”

ON Congresswoman Pam Shaw, currently chair of the Congressional Commerce Gaming and Land Committee, also applauded the occasion and technology building dedication to Pease. “I think it’s very fitting and I’m very happy to see Mr. Pease’s name on the building ... He’s also a very dear friend, he was also on the gaming board when I first entered the gaming industry, so he was a mentor to me too ... I’ve heard this all my life – our villages are the heartbeat of the Osage people and it’s exciting to see us come into the 21st century.”

Principal Chief Geoffrey Standing Bear also joined the officials and applauded the occasion because “we’ve never done this before and this is a different world ... And we’ve learned how to work together to make it happen. A lot of different people, it’s been a real pleasure to see this happen. We do know it’s going to be difficult, and we also know you can do it and somebody has to take the lead and that has been Osage LLC and OIS and the rest of us have been in a supporting role and will continue to do that.”

“Now that we’re here, I’m looking forward to Pawhuska and Hominy getting broadband there and all our people in the rural areas. I live in a rural area, I had the great pleasure of meeting (the Indigenous stars of Hulu/ FX’s streaming TV series ‘Reservation Dogs’ at a recent Oklahoma City Thunder game) and these young folks asked me ‘what do you think of our show?’ and I (replied): ‘I literally live on a reservation, so my internet does not get streaming, however I hear you guys are great!’ And so I want to be able to stream and get all the Hulu and everything else everyone else gets and I’ll just have to watch more TV,” Standing Bear said to the laughing crowd.

As for future broadband growth on the Osage Reservation, Standing Bear quoted prior conversations with federal officials and said: “At one time, the cities were built along the rivers and then they were built along the roads and railroads. Now the cities are going to be built along the internet networks and so we’ve got to be part of that to grow. And that way our young people don’t have to move to Houston or Dallas or New York or California. They can be right here and continue the work to join the new world.”

Afterward, the attendees joined members of Pease’s family members who gathered in front of the technology center building to cut a red ribbon tied to the two front accessways in celebration of the opening.