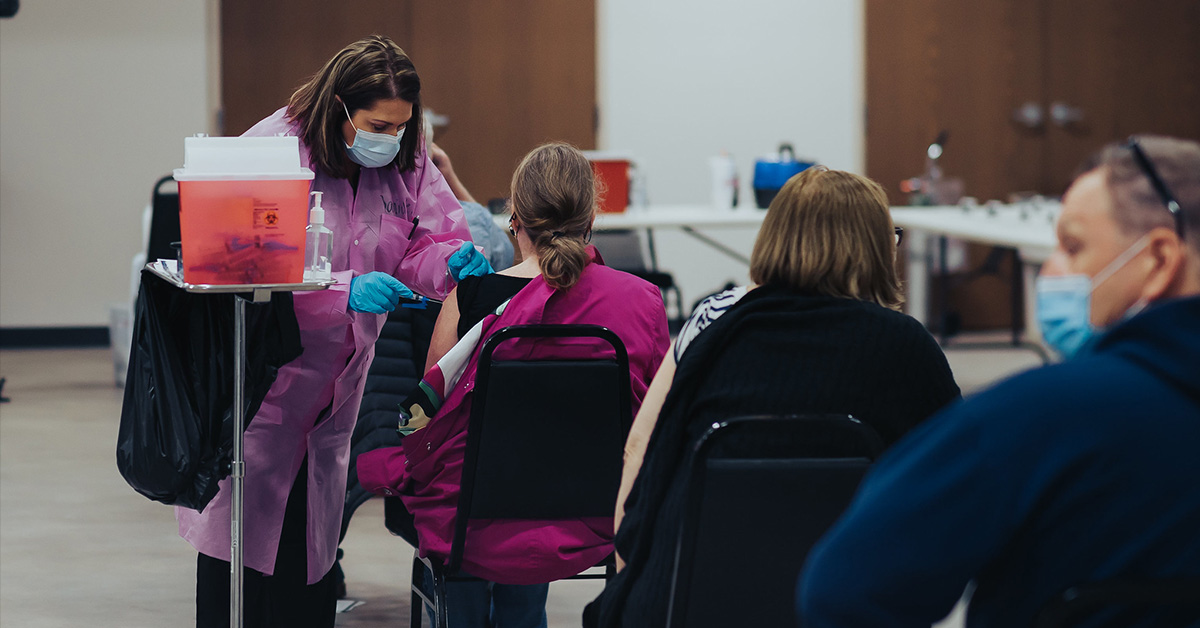 Chief Standing Bear: ‘I’m not going to force you to get vaccinated for work’

The Osage Nation’s accounting department had a major outbreak of Covid-19 on Tuesday morning, leaving tribal leaders worried about the spread of the virus.

Chief Geoffrey Standing Bear said he was informed Tuesday morning about the rash of cases. “Whether it’s seven or 11, that just wipes out the department,” he said. “I would think if there’s that many cases in accounting, there are more on the hill, but I have no proof.”

Standing Bear deferred to Communications Director Abigail Mashunkashey to supply details about mitigation efforts and to respond to specific questions about the number of Covid positives and vaccination rates among employees.

On Wednesday, Mashunkashey responded but with few specifics.

Citing the Health Insurance Portability and Accountability Act, or HIPAA, she said that the Nation would not share “employees’ medical information,” even regarding the number of afflicted employees in accounting.

Mashunkashey also wrote that the clinic amasses infection data monthly and that information would be provided “when available.”

Additionally, she said that the clinic does not differentiate between Osage Nation employees and other clinic patients, so employee infections – along with employee vaccination rates – could not be broken out.

The several positive cases Tuesday are significant: All of Osage County has been reporting about nine cases a day for the preceding seven days.

The highly transmissible omicron variant of Covid was first detected in Oklahoma on Dec. 21, three weeks after the first case was detected nationally. With stunning speed, the variant has established its dominance in such hotspots as New York, where the number of daily cases spiked from 1,683 on Dec. 1 to 45,341 on Jan. 1.

Oklahoma cases are starting to follow a similarly steep trajectory:  On Dec. 1, the state reported 585 cases and on Wednesday that number spiked to 3,914.

On Tuesday, the Oklahoma State Health Department reported that it had sequenced omicron in 57 percent of specimens gathered over the holidays while the delta variant was detected in the remainder.

The Centers for Disease Control noted that omicron was leading to an “exponential” increase in Covid cases for two reasons: omicron has greater transmissibility than previous variants and the ability to “evade immunity conferred by past infection of vaccination.”

Standing Bear lamented the situation. While talking to the Osage News on Tuesday, he received a text from a longtime friend who had just tested positive for Covid despite having been vaccinated and boosted.

“I was listening to a BBC report and this scientist said it’s going to mutate every 88 days, which is what omicron did. As long as we have just 7 percent of Africa vaccinated, it’s just going to be a mutant soup that will continue.

“We’ve got to make this a worldwide vaccination program.”

Osage County is among the most poorly vaccinated counties, with just 34.8 percent of its residents fully vaccinated.

Overall, OSDH reports that Native Americans have had the highest death rate of any racial group in the state, with 321 deaths per 100,000.

The Nation has no vaccination requirement for employees, but Standing Bear said that the Nation’s employee mask mandate, instituted in August, remains in effect.

The mandate requires employees to wear masks if they are indoors and within six feet of others, regardless of vaccination status.

Standing Bear said that Director of Operations Casey Johnson made an unannounced visit to the building that houses accounting on Tuesday and found complete compliance with the mandate, but it is commonplace to see employees and visitors alike without masks in tribal offices.

Standing Bear said that he has no plan to issue a vaccine mandate for employees, but he said employees have been offered extra paid time off – one day, according to Mashunkashey – if they are fully vaccinated.

A few tribes, including Oklahoma’s Citizen Potawatomi and the Cheyenne and Arapaho, have mandated vaccines for all employees.

Others have offered incentives that have resulted in vaccination rates higher than the state or local average. At the Cherokee Nation, the tribe reported Wednesday that more than 81 percent of its employees are vaccinated – almost double the 44 percent for Cherokee County generally. The Tahlequah-based tribe accomplished that by offering financial incentives: $300 if an employee received two jabs, another $300 if boosted, and, coming in April, another $300 for each worker in fully vaccinated departments.

Standing Bear said the time might come when the Nation might have to revisit a vaccine requirement.

“If it gets significantly worse and becomes a matter of life and death to the community, we might have to rethink making the vaccine mandatory.”