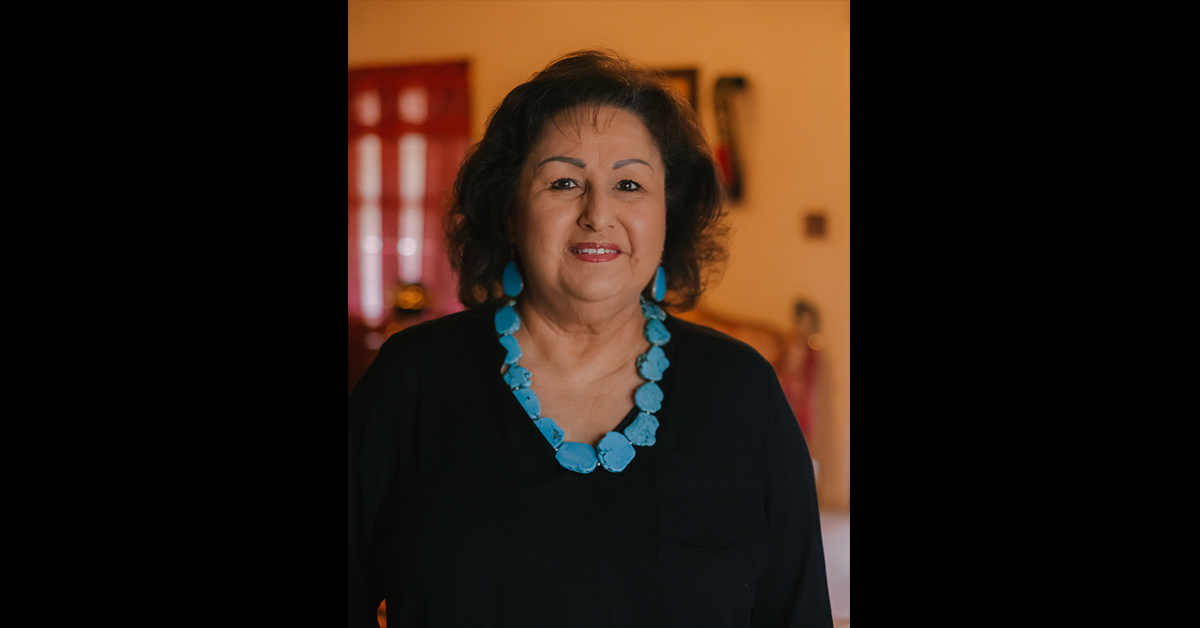 Billie Ponca may look familiar to you. Maybe you’ve seen her smiling face at the Water Bird Gallery? A popular tourist spot for those visiting historic Pawhuska. Or maybe she’s helped you with your genealogy at the White Hair Memorial? She was the director for 18-and-a-half years, from the late 1980s through the early 2000s. In either case, she has spent most of her life educating Osages about their culture and history.

Ponca was born on April 13, 1948, at Hamil Hospital in Fairfax, Okla. She remembers the name of the man who delivered her, “Mr. Max Benefield.” She is from the Grayhorse District, and every summer you will see her and her daughters and grandchildren dancing at Inlonshka. She has three daughters, Tiffany Streater, Wendi Marsden and JimmieLynn McMillen; three grandchildren, one great-grandchild and another on the way.

She graduated from Fairfax High School, “I’m a hardcore Red Devil,” and earned her bachelor’s degree in Fine Arts with an emphasis in ceramics and museum studies from the Institute of American Indian Arts in Santa Fe, N.M. She’s worked as a Cosmetologist, a foot care specialist, as the director of the White Hair Memorial, a store owner and now she works at the Water Bird Gallery.

Her Osage name is Clu-Ah-To-Me “Eagle Woman,” which is a first daughter’s name, she said.

We sat down with Billie Ponca at the Water Bird Gallery on Dec. 15 for the interview.

Osage News: What are your fondest memories of your childhood in Fairfax?

Ponca: “Skating at Jump’s Roller Inn. They owned it and I was there a lot. Of course, roller skating was there, and it was just go, go, go! There was no stopping you. I had been skating since I could put roller skates on.”

Ponca: “Well, when I was young you could go to the movie at the Tallchief Theater for 25 cents and have a dime left over for popcorn or pop (laughs). I would go see a film every Saturday and sometimes on Sunday if I got lucky.

“When I went, what’s funny to me now, back then they would have these little newsreels between the commercials, and they would show you the news of the day and have all of that. But one fond, fond memory I have was when Elvis Presley hit the scene. I went to the movie with one of my best friends and she could not sit still in that chair. I got embarrassed and went to the other side of the theater from her (laughs).”

Ponca: “Well, I would have to say, Mother Teresa. You know, I think we forget sometimes how blessed we are and sometimes we seem to think we want more and more and then we look around and see other people who don’t have as much. I think Mother Teresa always seemed to be loving and giving.”

ON: What was the happiest time of your life?

Ponca: “Of course what I love the most is my children and that’s just non-ending. Traveling, I love to travel. I love going places because to me that’s educational. I would much rather take a trip and see all the sights of that particular city than sit down and read about it.”

Ponca: “Well, that would be probably going to the movies, I love to go to the movies. Of course, the casinos are part of our lives now, and spending time with the kids, children and friends.”

Ponca: “I think the 1960s because things were hoppin in Fairfax in the 60s (laughs). You had the movies, you had the dances, you had the rodeos, it was just a hoppin little place. There was always something to do, always excitement, the streets were full of people, you had stores and cars lined up and we’d walk to town every Saturday with our hair in those juice cans (laughs) to get ready for Saturday evening. Spending time with friends, dragging Main, that was a lot of fun.”

Ponca: “I think whenever they tore down the Berlin Wall, that had the most effect on me.”

Ponca: “Behave (laughs), and did you really think that was necessary (laughs)?”

Ponca: “I probably have several of those (laughs). The greatest regret was not furthering my education when I was younger because I really believe in education and I encourage my children and grandchildren. I feel like education is powerful and moves you through many different situations and opens many doors.”

Ponca: “Raising three kids. And working at White Hair Memorial. I came home one summer, and someone asked me what I was going to do after I graduated (from IAIA) and I told them I didn’t know because there weren’t a whole lot of museums in Fairfax. Someone told Dan Swan about me, and I met him that summer and he said that when I graduated to come see him at the White Hair Memorial. So, I did, and we visited about what the White Hair Memorial was and he liked that I was a family member. See, the White Hair Memorial is the home of my great aunt Lillie Morrell Burkhart, and it functions under the Oklahoma Historical Society. She left her home and her headright interest to the historical society for the preservation of her home and her Osage collection but also for the furtherance of Osage culture. Dr. Swan was there at the beginning of White Hair and he was tasked with opening it, hiring someone and then he moved on. But working at White Hair really educated me about my Osage heritage, I learned an awful lot from being out there. Not only from its archives but from the many instructors and elders we had teaching classes out there. We had Harry Red Eagle, Kenny Bighorse Sr., Preston Morrell, Lenora Morrell, Lottie Pratt, and many others. I used to love to sit and listen to Preston and Lenora speak in Osage together, it just flowed. It was beautiful, not like how you hear it now, it flowed. I wish I could hear that again. I’m very thankful I got to work under Dr. Swan and after he left, I worked under Dr. Blackburn, and it was just a wonderful, learning, emotional experience for me. I really had strong ties to it with it being my great aunt’s home.”