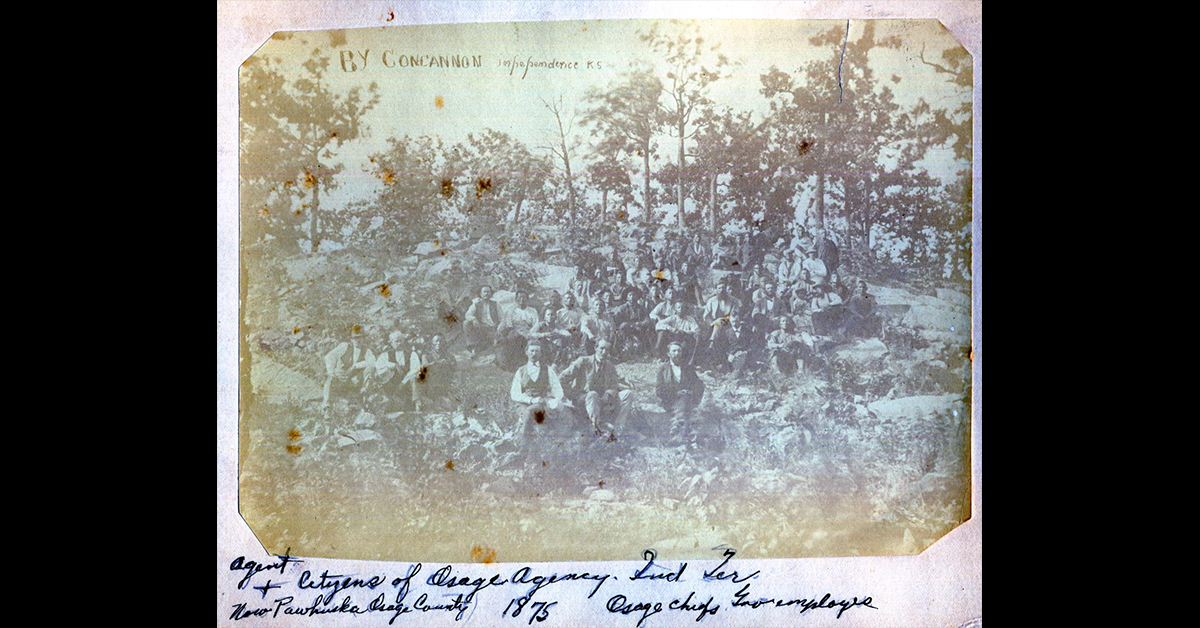 A photo with the Osage Agency Superintendent, employees and Osages, circa 1875. Courtesy Photo/Oklahoma Historical Society website

The year 2022 marks the 150th anniversary of the Osage Removal from Kansas to the present-day Osage Reservation, Indian Territory.

Later in the year, the Osage Nation will commemorate the historic moment with details and plans to follow. To start with planning expenditures, the Seventh ON Congress approved a $100,000 supplemental appropriation to the Communications Department fiscal year 2022 budget for conference and special events.

The $100,000 appropriation is in bill ONCA 22-18 (sponsored by Congresswoman Alice Goodfox) approved during the 12th Special Session on Dec. 15.

“This $100,000 is specifically for the upcoming sesquicentennial, which is the 150-year anniversary,” Communications Director Abby Mashunkashey told the Congressional Appropriations Committee on Dec. 14. “We are reviewing past celebrations to find out ways we can borrow from those successes and also learn ways we can improve. We need to develop various committees for this significant moment for the Nation. Possible uses of the requested funds – which there is much planning to do – is for planning, development and distribution of literature, documentation needs, commissioning a commemorative item – sculpture, possible art installations – exploring ways we can commemorate those and also budgeting and planning for a multi-day event for potentially thousands of individuals, which has the potential to be a large expense ... We would need to look at hiring event planners to support that and also thinking about expenses for food and tents and lighting to name a few.”

Appropriations Committee Chair and Second Speaker Jodie Revard asked about timing of the proposed commemoration. Mashunkashey said planning is still preliminary with a proposed fall season date since June is a busy time for the Nation with the Inlonshka, as well as the 2022 General Election.

Principal Chief Geoffrey Standing Bear told the Congress he recalled the celebration as well. “I remember dancing in front of the museum, it was 1972, the 100th anniversary of our coming to this area, which is the Osage Territory and we have some of the agendas and other documents from those days and this is a proposal to have a planning for that (150th anniversary) event this year,” he said.

ONCA 22-18 passed the following day during the two-day special session and Standing Bear signed the bill into law.