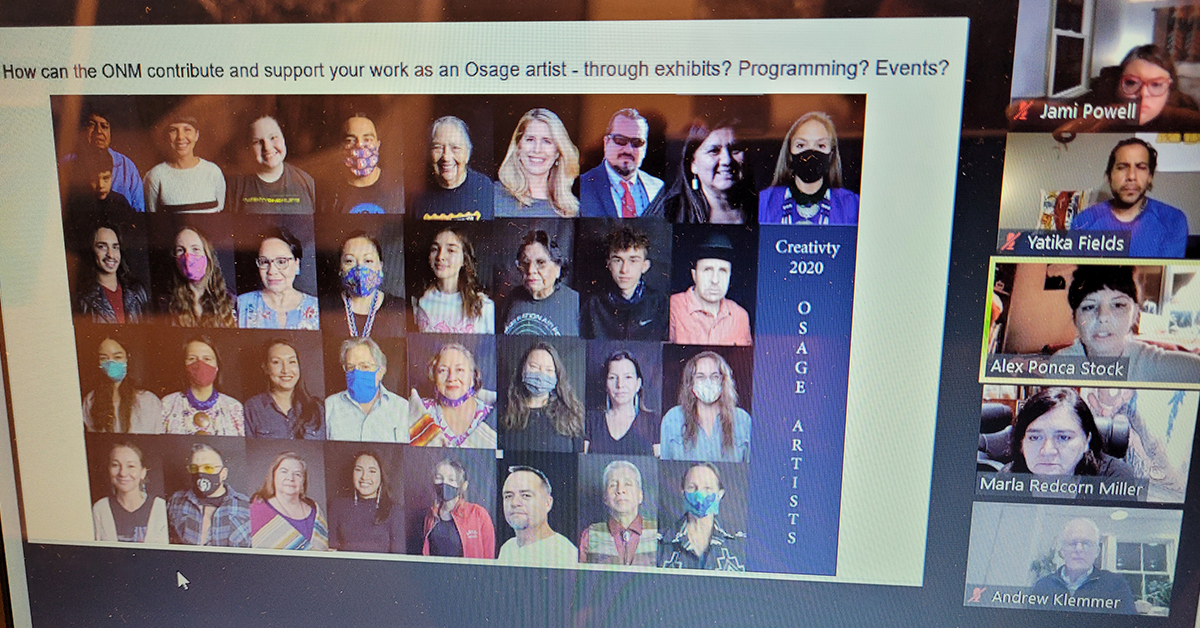 Osage artists and those with museum experience participate in a Dec. 13, 2021, Zoom meeting with Osage Nation Museum Director Marla Redcorn-Miller and Andrew Klemmer of Paratus Group on the renovation/ expansion project of the ON Museum which opened in 1938. BENNY POLACCA/Osage News

Redcorn-Miller said, “it’s incredible” in referring to feedback from Osage artists and “scholars who have a vested interest in what we’re doing” and what they would like to see in a renovated and expanded ON Museum – the oldest tribally-owned museum in the United States dedicated in 1938.

Kilan Jacobs, an artist and Historic Preservation Office worker, said Osage history is important. “I think as we look back – especially with cultural items – we can see the development of where we are today ... It is empowering to me to see a strong base of where we come from.”

Todd Caissie, a New Jersey resident and Ph.D. candidate in Art History and Cultural Heritage and Preservation Studies at Rutgers University, said he’s “interested in learning about access and digital collections. I would like access that is broad, creates awareness, I’m also happy to help volunteer.”

Osage/Muscogee Creek artist Yatika Fields said he recently viewed photos of the 1938 museum dedication, which had a meal and dance activities, including a tent set up next to the building. He thought of the ongoing Voices from the Drum exhibit featuring hand drums with paintings and designs by Osage artists. The exhibit also made its debut under an outdoor tent at the museum.

Jacobs said he would like to see more artist opportunities with exhibits like Voices from the Drum featuring “other items we still use today” including baby cradleboards.

Klemmer, with New York-based Paratus Group, an owner’s representative group, is working with the Nation on the museum interpretive plans.

Dr. Jessica Harjo said she spoke with her father, artist Ted Moore, recently and added they would like to see studio space at the museum so artists “have access to the collections,” which could help “cultivate different work that you can’t do at home.” She added the new museum could also offer residency and visitor opportunities to bring artists to the Pawhuska institution.

Osage artist Alex Ponca Stock said she would also like to see more creative opportunities for youth, adding “kids don’t need institutions to do art, they need access to it.”

Artist Anita Fields said she would like the new museum to include life elements including water, as well as “comfortable accommodations for everyone, elderly too.”

Referring to the ongoing interpretive plan, Klemmer agreed with much of the feedback and referred to an earlier comment by Anita Fields: “We have to be specific about what we need and that involves priorities, it’s an architect’s job to find out how do we make this happen.”

Welana Queton, who recently finished exhibit work with the newly-opened First Americans Museum in Oklahoma City, said she understood the discussions that take place in preparing to plan and open an institution. “What you say is going to influence what the museum looks like. I encourage everyone to think big,” she said.

Redcorn-Miller acknowledged former museum director/ curator Hallie Winter, who also participated in the Dec. 14 meeting who “did an incredible job” during her tenure which included addressing storage space and updated interior LED lighting and exhibit space features. Winter, who is now the collections manager at FAM, said “we should use our current relationships in the Nation” in developing the museum. For example, the work and expertise of departments including the Wahzhazhe Cultural Center and Historic Preservation Office could be utilized, Winter said.

Nanette Kelley said she’s worked with various Northern California art organizations, which includes “decolonizing the way we do business,” adding she believes “the (ON) museum must cater to our people first” and the museum should also “create opportunities for (ONM) to be visible” including virtual presence in university classrooms for more audiences.

Powell agreed with Kelley’s thoughts on decolonizing ways to build an institution, adding the Nation should “use our Osage ways as a starting point.”

Dr. Robert Warrior said he would like to see the new museum “being able to include as many people as possible for Osages who live near or far,” as well as acknowledge other Osages for their historical contributions in addition to culture.

Redcorn-Miller thanked everyone for their comments. “It’s very heartening and important to hear, for the project to come together. It’s important for Osages to see themselves reflected in this space ... We will continue to reach out to you, thank you for your time and commitments.”