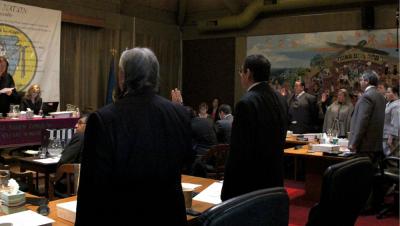 On Day One, attorneys for Chief Red Eagle and the Congress delivered opening statements for their clients in the Nation’s first ever removal trial held for an elected official.

Mark Lyons, attorney for the Congress, referred to the reformed 2006 Osage Constitution in his opening statement noting key words including “accountability” in the Constitution’s preamble which states: “This Constitution, created by the Osage people, hereby grants to every Osage citizen a vote that is equal to all others and forms a government that is accountable to the citizens of the Osage Nation.”

Chief Red Eagle’s attorney, Kirke Kickingbird also referred to the Constitution noting the three separate branches of government and their defined responsibilities. He also argued the case is an issue of political infighting.

“What we got is a new transition into the new format of government and I’ve seen this format other places, most prominently when these three branches operate there’s a struggle on how to define power,” Kickingbird said. “These shifts often result in a lot of turmoil with questions about ‘how will we operate?’ and sometimes they’re reluctant to give up these roles and there’s difficulty in defining where these new roles come together and I believe that’s what we’re seeing here.”

Also on Day One, ON Supreme Court Associate Justice Jeanine Logan asked the 12 ON Congress members present to take oaths for the trial in which they will serve as the deciding body on whether Chief Red Eagle should be removed on one or more of the six allegations that are the focus of the trial.

Twenty-six witnesses present also appeared before Logan and took oaths to tell the truth when their turn comes to testify and be cross-examined by legal counsel for both Congress and Chief Red Eagle. The testifying witnesses comprise mostly elected or appointed ON officials or ON governmental employees who were served subpoenas by ON law enforcement officers.

Lyons also noted former Chief Red Eagle appointee Paul Allen was also sought for testimony but he had yet to be located for a process server to deliver his subpoena. Allen served on Chief Red Eagle’s campaign in 2010 and received a work contract from Chief Red Eagle that is the subject of allegation No. 6. The allegation said Chief Red Eagle “violated Osage and federal laws, misusing public money of the Osage Nation by authorizing Paul Allen to be paid $73,334 in Osage Nation public monies for personal services contracts, for which he admittedly did no work to earn his fees, which constitutes malfeasance in office, abuse of the government process and undermining the integrity of the office.”

Check back to www.osagenews.org for updates on the trial, as well as the newspaper’s Facebook page.

Benny Polaccahttps://osagenews.org
Benny Polacca started at the Osage News in 2009 as a reporter and has covered various stories and events impacting the Osage Nation and Osage people. Polacca is part of the News team awarded the Native American Journalist Association’s Elias Boudinot Free Press Award in 2014 and other NAJA Media Awards and SPJ Oklahoma Pro Chapter awards for news coverage and photography. Polacca is an Arizona State University graduate and participated in the former American Indian Journalism Institute at the University of South Dakota. He previously worked at The Forum newspaper covering the Fargo, N.D. region as the weeknight reporter.
RELATED ARTICLES
Government

Judge to rule on Osage Nation’s reservation status on Sept. 8

ON Attorney General: Congress can review finances of Osage businesses