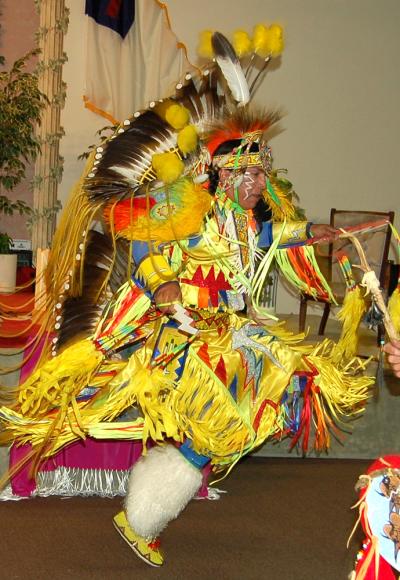 Michael Pahsetopah is vying for a spot on the NBC reality show, which begins June 23. The winner takes home $1 million

Michael Pahsetopah, whose family’s dance troupe performs across the country, have scored an audition for NBC’s “America’s Got Talent.”

“I love dancing – it’s not just a hobby or something I do on the weekends,” said Michael Pahsetopah, 50, a Christian minister who has been fancy dancing since childhood. “To be able to use it out there in the world is almost like an ambassador – it changes attitudes from non-Native people.”

Pahsetopah, with his wife Lisa and six-year-old daughter Heaven are vying for a spot on “America’s Got Talent” where the winner takes home a grand prize of $1 million. The show begins June 23 and is in its fourth season, according to the NBC’s Web site.

Pahsetopah, who lives in Sapulpa, received a phone call from an NBC official in mid-April asking him to audition for the nationally televised talent show in Houston during the weekend of May 9-10. The NBC official had heard of Pahsetopah and his family’s performances from a member of the Oklahoma Arts Council. He accepted and performed with his wife Lisa, who dances Jingle and Southern Cloth, and his six-year-old daughter Heaven who dances Jingle, Fancy Shawl and the Eagle Dance. Heaven is also learning how to do the Hoop Dance like her father.

Pahsetopah said the biggest challenge was the 90 seconds in which they had to audition. The average song runs approximately four minutes and he prepared for the audition by researching more dance techniques and being more cautious to avoid injury to his joints.

The Pahsetopahs auditioned in front of casting directors May 10 and received good remarks. They were told they would be notified within 48 hours for the televised second round of auditions that were to take place in Houston May 12-13. Whether or not the Pahsetopah’s advanced was unknown when this edition of the Osage News went to press.

If the show officials retain the Pahsetopahs beyond the first round of auditions, he said he would mix up his routines and perform the Hoop Dance, perform flute songs and do storytelling.

He said he is not worried if his auditions continue onto the televised rounds. As a champion fancy dancer, Pahsetopah has performed in front of thousands at numerous special events, has several TV appearances under his belt including commercials and the CBS series “Walker Texas Ranger,” and was the first Native American to dance at the top of the Eiffel Tower.

“I’m going to use anything in my arsenal that God’s equipped me with,” he said.

Pahsetopah, who is of Osage, Muscogee and Yuchi ancestry, said the NBC official told him over the phone that he was the sole Native American auditioning for the show thus far. He said he accepts the audition challenge on behalf of other Natives.

“I’m not just doing this for me,” he said. “I’m representing those who never got these opportunities.”