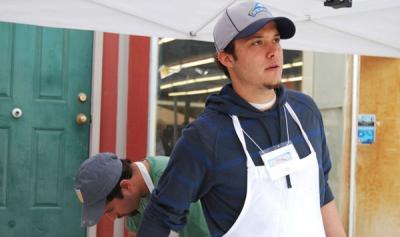 Frybread fans visiting or living in Denver don’t have to wait until the next powwow, state fair or trip to the reservation to get an Indian taco thanks to an Osage tribal member.

Restaurateur Ben Jacobs co-owns Tocabe: An American Indian Eatery in the Mile High City with a menu offering Indian tacos with all the fixings, from spicy to sweet. Its menu offers taco toppings with choices of meat and beans and other toppings including six salsa options. For dessert, there’s tacos topped with powdered sugar or fruit.

Jacobs, 26, said Tocabe, now the city’s sole Native American food eatery, is similar to Grayhorse, the Denver restaurant his parents owned about 20 years ago. “It’s always a special occasion to eat frybread, maybe we should do a restaurant like (Grayhorse),” he recalled while he and others brainstormed ideas for the restaurant.

Jacobs, who was born in Denver, co-owns Tocabe, located at 3536 W. 44th Ave., with friend Matthew Chandra, whom he met while they both attended the University of Denver. His parents, Jan and Tom Jacobs, are also part-owners and help at the restaurant.

Tocabe, which according to Jacob’s research means the color “blue” in Osage, opened on December 18 with its buzz spread mostly through small print publications, the Internet and even a TV news segment. The restaurant’s business jumped by at least half after it was featured in a May 20 Denver Post story, Jacobs said.

“It’s been great in getting the word out,” Jacobs said of the newspaper’s story. “We’re the only ones in Denver that focus on frybread.”

Jacobs said he and Chandra both work 13 to 15-hour workdays at least six days per week, “but we really enjoy it.” Each week, Jacobs estimates the restaurant goes through eight to 10 bags of flour that weigh 50 pounds to make the frybread.

Tocabe’s menu gives customers a choice of meats including shredded or ground beef, ground buffalo, grilled chicken and three types of beans for their taco dishes ranging in price from $6 to $8.50.

Jacobs attributes his restaurant’s “pretty cheap” prices as one attraction for his frybread-loving customers or those curious to try an Indian taco. “Denver’s a huge dining city. I feel like we have a step ahead.”

A staff of 10 works at Tocabe with half of them being Native Americans, which Jacobs says “definitely helps” for inquiring customers. “They have a lot of experience in what Indian tacos are and are ready to answer questions.”

The recipes for Tocabe’s food are rooted in Jacobs’ elders. His grandmother Georgeann Robinson taught his mother how to cook and she passed the recipes onto Jacobs, he said.

While researching for other recipes, Jacobs came across one for hominy salsa, which he and Chandra offer at Tocabe and used it as part of their Indian taco entry dish recently at the fifth annual National Indian Taco Championship in Pawhuska.

The salsa, which includes hominy, cranberries and other spices, topped the shredded beef, pinto beans and other garnishments on the duo’s entry plate. Jacobs and Chandra’s dish caught the judges’ attention and they won second place and a $1,000 check in the competition.

Hundreds of people attended the May 16 cooking competition in downtown Pawhuska where Jacobs and Chandra cooked for the judges and also sold tacos to the hungry spectators including Rebecca Brave who enjoyed the Tocabe Indian taco.

“It’s light and fluffy and airy,” Brave said of the frybread. She also enjoyed the taco’s green chili and hominy salsa topping, adding, “I need my food to have some pizzazz.”

While Jacobs and Chandra prepped their food during the cooking competition, they sold t-shirts bearing Tocabe’s name on the front and the following phrase on the back:

“My heroes have always cooked frybread.”