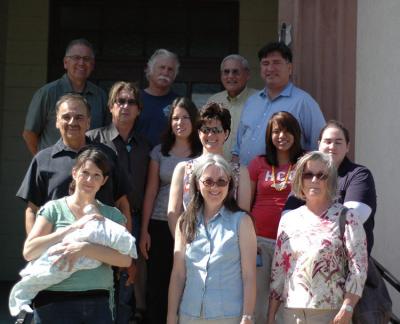 Language Program Director Herman “Mogri” Lookout and instructors John Maker and Talee Red Corn traveled to the group’s May 16 meeting in Petaluma, Calif., and gave a presentation on their program and beginner-level language lessons. Lookout said it was the first time the Language Program conducted this type of seminar for the Northern California Osage Group.

The event shows out-of-state Osages “what we’re doing with the program and how we run and handle things,” said Lookout. The seminar ran from 9 a.m. and lasted until 5 p.m. with about 12 group members attending, he said.

The attendees each received a textbook and audio CD with beginning Osage language lessons and presentations by Lookout and Maker, which touched on the language’s orthography, pronunciation and an Osage history lesson by Red Corn.

The presentation covers Osage history including the tribe’s treaties, changes in the language, and words not covered in the textbook, Maker said.

The program has Osage words and pronunciations listed on its department page of the Nation’s Web site, but Lookout said being taught the language by someone else in-person is different than learning it alone.

“It’s better to have someone there to go through it,” Lookout said of the language textbook.

Maker said his cousin Charles Maker, who is president of the Northern California Osage Group, contacted him about having the program conduct a seminar.

“A lot of (out-of-state Osages) don’t come back here often,” John Maker said referring to dark periods in 20th century history, which resulted in many tribal members leaving the area. He cited The Great Depression and the Osage Reign of Terror as examples. “We think it’s great they invited us,”