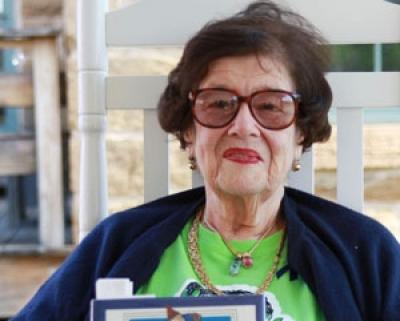 Mathew’s manuscripts on literacy sent to the U.S. Library of Congress

The U.S. Library of Congress is the new home to the life’s work of an Osage dedicated to improving literacy among American children.

Virginia Mathews sent 34 boxes of manuscripts from her time serving as the staff director of the former National Book Committee from 1957 to 1974. The Library of Congress requested the contribution in order to have a record of the committee’s work promoting literacy—which Mathews has dedicated her life to improving.

“It’s been an honor to educate and serve with those who would promote literacy for young children,” said Mathews, an enrolled Osage tribal member. “I never had any children of my own but this is something dear to my heart. I would have to say my greatest interest is in young people, always has been.”

Mathews, 84, is the daughter of the late John Joseph Mathews, an author who wrote award-winning books on the Osage. Administrative records from her time with the National Book Committee show some of the group’s best work, said John Cole, former director of the committee. He now serves as director of the Center for the Book in the Library of Congress.

The Library of Congress is the nation's oldest federal cultural institution and serves as the research arm of Congress. It is also the largest library in the world, with millions of books, recordings, photographs, maps and manuscripts in its collections, according to its Web site.

Once Mathews’ materials are organized, they’ll be available to scholars, researchers, reading promoters and the public, Cole said.

The National Book Committee was a pioneer in reading and library promotion, Cole said. It established National Library Week and worked closely with the American Book Publishers Council’s Committee on Reading Development. The committee also worked with the Children's Television Workshop to create “Sesame Street,” which Cole said was one of the first uses of television to promote reading and learning among young people. The committee developed a 15-segment television series, Reading Out Loud," produced by the Westinghouse Broadcasting Company and telecast throughout the country in 1961-62.

“As staff director, Virginia was closely involved with all of these projects and many more,” he said. “She also wrote many valuable pamphlets and articles and a book, ‘Libraries for Today and Tomorrow,’ in 1976.”

When Cole began the Center for the Book in the library he asked three individuals to come on as consultants, including Mathews. She worked as a consultant for the center until her “retirement” in 2007.

Mathews has spent her life advocating for literacy and libraries. She’s won numerous awards, helped pioneer literacy in the South, wrote the manual for America’s Head Start system and helped develop children’s museums across the country. At 84, she still doesn’t consider herself retired.

When she left the Center for the Book she moved to Pawhuska to continue her work with Osage youth. She currently works with the Nation’s Head Start programs giving classes on parenting and how to promote literacy with their children; she advocates on behalf of the Nation’s Boys & Girl’s Club and its survival and she is also involved in cultural preservation of historic sites on the Osage, one being her father’s home.

The Osage Nation Congress commended Mathews for devoting “more than 55 years to writing, editing and promoting the importance of literacy and libraries” and for conducting “hundreds of conferences, workshops and institutes on library services” and the resources she’s developed to aid in the development of lifetime reading habits, according to the proclamation.

All of her many accolades she has been given throughout her life never justify her giving up her work, she said. Mathews attends as many Osage congressional sessions and meetings as she can and makes time to visit and read to Osage children whenever she gets the chance.

“It’s been a great wonderful work,” she said, “and I have enjoyed it.”