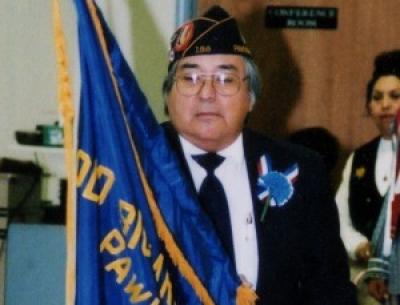 The Osage community of Pawhuska fell silent May 18 as Andrew “Buddy” Red Corn was laid to rest on the east side of what is locally known as Lookout Mountain. A constant fixture around the cooking fires of the Pawhuska district and a loyal attendee of the Osage Baptist Church, the humble Red Corn never told people that he was the most highly decorated Native American veteran of the Vietnam War.

“We don’t get the opportunity to meet people like him very often in life . . . someone so brave and with such strong faith,” said Curtis Kekahbah, a childhood friend of Red Corn’s and Native American traditional counselor for U.S. Department of Veterans Affairs hospitals in Arizona, New Mexico and South Dakota. “That’s how he got his medals because he had amazing courage and bravery. He didn’t run.”

In 1967, Red Corn received four medals for his heroism in Vietnam. He was awarded the Oak Leaf Cluster with Valor, the National Defense Service Medal, the Republic of Vietnam Campaign Medal and the Vietnam Service Medal with one bronze service star. He also received the Combat Infantryman badge and was distinguished as a rifle marksman and a second-class gunner with an 81mm mortar.

According to the book, “The Deaths of Sybil Bolton,” by Denny McAuliffe, Red Corn was the most highly decorated Native American of the Vietnam War.

Complications from diabetes eventually took Red Corn’s life. The disease had taken his legs in previous years, and when it started to affect his heart, he was placed in a nursing home in Jenks, where he died May 14.

“We went down to visit him every Saturday,” said his wife, Margaret, 59. “I think [the family] may have missed twice the whole two-and-a-half years he was down there. Of course, everybody liked him at the nursing home, and they just loved him to pieces. He would visit the little children at the day care center [next door] and mentor them with stories, and they wrote an article about Buddy about how they would miss him after he died.”

Red Corn was born Dec. 25, 1943, in Pawhuska to Harold and Louise (Gray) Red Corn. He grew up playing in the Pawhuska Indian Camp with his three older brothers and older sister. He was never a flashy athlete in school like his older brothers or the smartest in the class but he grew up loved and danced in the Osage In-Lon-Schka dances and attended the Osage Baptist Church with his parents every week.

In 1966, Red Corn was drafted into the Army and sent to Fort Polk, La., to undergo training, Kekahbah said. The hot, sticky weather at the infantry training center there gave new soldiers a taste of what they were to encounter in the debilitating heat and humidity of South Vietnam.

Kekahbah was finishing his training at Fort Polk when Red Corn arrived to be trained to join a mortar crew, something that made Kekahbah nervous for his friend’s life because “mortars were very heavy and they had to carry the shells . . . he was having to drag and carry that stuff through the jungle.” Mortar crews carry muzzle-loading cannons that can be operated by one or two men. The men carry and assemble the weapon, mounting its firing tube on a base plate and launching the mortar rounds.

On April 1, 1967, Red Corn was serving as a mortar crewman with the 1st Battalion, 26th Infantry Regiment of the 1st Infantry Division (The Big Red One) during Operation Junction City northwest of Saigon. He and his unit were occupying a defensive perimeter in Viet Cong territory and came under heavy mortar and automatic weapons fire that killed almost all of his comrades.

Vastly outnumbered, Red Corn “exposed himself to unrelenting hostile fire and directed devastating fire onto the Viet Cong, forcing them to withdraw and regroup,” according to a letter sent by his commanding officer to Red Corn’s parents on May 12, 1967. The Viet Cong regrouped and launched another massive attack that breached the unit’s perimeter.

“Red Corn immediately moved to fire onto the insurgents. When the Viet Cong advanced to within 30 meters of his location, Private First Class Red Corn threw his hand grenades and then engaged in hand-to-hand combat with the enemy,” his commander wrote.

“The courageous fighting of Private First Class Red Corn and his comrades so decimated the Viet Cong ranks that the survivors fled in complete disorder, leaving more than 600 of their dead on the battle site.”

He returned home to Pawhuska and a hero’s welcome after spending more than a year in Vietnam. As a tribute to Red Corn’s bravery, the late Morris Lookout, a highly revered singer of the Pawhuska district, wrote a song in his honor that is still sung every Sunday during individual songs of the Pawhuska In-Lon-Schka dances.

Red Corn leaves his wife Margaret of 40 years and their daughters, Tonya, 38, and Michelle, 36, as well as granddaughter Emma, 17. He worked for the tribe for 35 years as a jack-of-all-trades, supervising the mailroom by himself and fixing anything on the Osage campus that needed fixing. In his office, he kept his Bible and read it daily, his wife said. In it was a photo of the couple when they were young, she added.

Throughout his life, Red Corn remained active as a veteran. He was a charter member of the American Legion in Denver, a member and past commander of American Legion Post 198 in Pawhuska. He also served as the first Head Man Dancer for the Vietnam Veterans Powwow.

At St. John Medical Center in Tulsa, where he was being treated before he died, Red Corn told his wife that he did not want to die there. When doctors said further treatment would not prolong his life, he was returned to the nursing home where he died 15 minutes after arrival, she said.

At the funeral May 18, his brother, Charles, and Charles’s son, Yancey, talked about the humble way Red Corn lived his life and credited his strong faith for his survival in Vietnam.

“Some were hand-to-hand battles, but he was never scratched,” Yancey told mourners. “He credited his faith in the Lord for seeing him through . . . As those old ones have told us, when the sun is overhead at noon, Uncle Bud will go with the sun.”