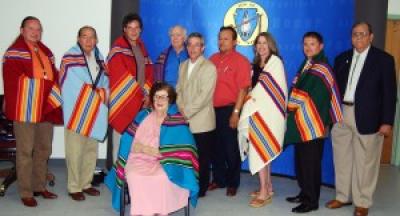 Osage writers tell of their inspirations at summit

Seven Osage writers honored by the Osage Nation at a June 24 summit each did readings from their work and described how their tribal heritage impacts their writing.

“Everybody has a different style,” said Carter Revard, who is a poet and Rhodes scholar. “I would say there is another process for Indian people… and the process is a long one,” he said of tribal history and culture.

Revard, who is of Osage and Ponca heritage, is a retired professor of English and medieval literature at Washington University in St. Louis. He has written Native American-related works including, “Living in the Holy Land,” which chronicles the Osage creation and history in what is now known as the United States.

“It has to be a really good idea,” Patrick Chalfant said of his writing, adding the craft is “99 percent perspiration and one percent inspiration.” He has written the fiction novels, “Bury My Heart at Redtree,” and, “When the Levee Breaks.”

Revard and Chalfant were joined by Charles Red Corn, Elise Paschen, Monte Boulanger, George Tinker and Virginia Mathews who appeared at the day-long writer’s summit at the Wah-Zha-Zhi Cultural Center in Pawhuska. Each writer specializes in different backgrounds such as creative writing, history and academic writing.

The summit marks “the first time we’ve gotten together to honor Osage writers,” said Louis Gray who was joined by Assistant Principal Chief John Red Eagle at the event.

“I’m just blessed for you to be here to share your work and your gift to us,” Red Eagle told the writers.

Charles Red Corn, who grew up in a traditional Osage family, said he wanted to tell a story of the Osages he remembered. Raised in the Pawhuska Indian Camp, Red Corn said he enjoyed observing and listening to older people, including family members, when he was young. “The story of the (Osage) clans is so important,” Red Corn said as a storytelling example.

Red Corn, who has worked in the Indian education and economic development fields, wrote the novel, “A Pipe for February,” which is based on the series of Osage murders taking place in the 1920s – also referred to as the Osage Reign of Terror. Red Corn was also the first Tribal Scholar Fellow in Dartmouth College’s Native American Studies program in 2004.

George Tinker, who is professor of American Indian cultures and history at Iliff School of Theology in Denver, said he writes academic works to “deflect stereotypes” about Native Americans, which were written by white authors. “I wanted to take that record and challenge it,” he said because, “that record is considered the absolute truth.”

Tinker, author of works including, “American Indian Liberation: A Theology of Sovereignty,” noted that many early historical works penned by non-Native authors were “99 percent wrong and it’s full of white lies.” Such works contained beliefs that Native people, “were blood-thirsty, vicious savage peoples,” Tinker said, adding “my work is to challenge that narrative every way I can.”

Also appearing at the summit was Virginia Mathews, who recently submitted more than 30 boxes of manuscripts to the U.S. Library of Congress from her staff director post for the former National Book Committee. Mathews, a children’s literacy advocate, held the director’s position from 1957 to 1974.

The 30-plus boxes submitted by Mathews to the U.S. Library of Congress in Washington D.C. contain more than 90,000 items documenting her former committee’s work. Mathews read excerpts from books by renowned and award winning Osage author John Joseph Mathews, her father.

“Everyone has a story, but it’s what your passionate about” which comes out in writing, said Boulanger, who said he writes from the romantic perspective. Boulanger, author of “In the Sweet Light,” said its title refers to “the last 30 minutes of daylight; that is a very romantic time of day.”

“Many of my poems begin in a passionate place,” said Paschen, who is the daughter to renowned ballerina Maria Tallchief and now teaches in the Masters of Fine Arts program at the School of the Art Institute of Chicago. She said many of her poems are also stories, including, “Ash,” which was written after the death of her father whose remains were cremated.