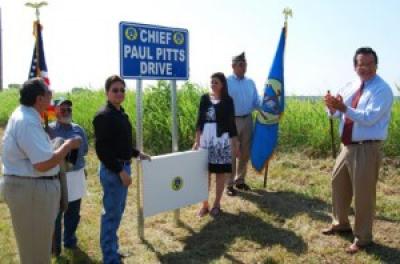 A rural road that runs past the allotment of late Osage Principal Chief Paul Pitts has been dedicated in his honor.

Chief Paul Pitts Drive was dedicated in a June 25 ceremony at the intersection of County Road 2350 and E0330 Road, which runs east from State Highway 99 south of Wynona toward Barnsdall.

“He was dedicated to our nation,” said Olivia “Libbi” Gray of her grandfather who died in 1970. According to Gray, who is married to Osage Nation Principal Chief Jim Gray, “he saw it as an honor” to serve as a leader adding that the dedication “meant so much for our family.”

The road was originally named for Pitts in the early 1970s according to county and tribal research, said Chief Jim Gray. He said the road dedication “says a lot of the culture of this area.”

Pitts, who finished Chief John Oberly’s term after he died in office and successfully ran for office four times, is remembered as a dedicated leader who loved his family, Osage culture and helped defend his people by testifying before a U.S. congressional panel in the 1950s when the tribe was being considered for termination.

“I do wish… you will exclude the Osage Tribe because of the different mechanical, the working that we have,” Pitts told a U.S. subcommittee on Indian affairs in July 1953 when the government was seeking to end its trust relationships with several tribes. “It is running smoothly and I do not see how we can find another pattern that is workable like the one we have,” he said in his documented testimony.

Pitts led an Osage delegation that traveled to Washington, D.C., and addressed the U.S. House subcommittee considering the terminations of the Osage and other tribes including the Klamath Tribe in Oregon and the Menominee in Wisconsin who were both terminated. It took several years for both tribes to win their tribes’ federal recognition back.

“It was a very critical juncture in time,” current Principal Chief Jim Gray said of the termination era.

“(Pitts) was humble and respectful, but firm about who we are and what our Nation was,” Libbi Gray said. She described Pitts as a “very well-rounded person” who could put on a business suit for a meeting in Washington but was also active in Osage activities such as the In-Lon-Schka dances and handgames.

Pitts was one of the last Chiefs who was fluent in the Osage language, Chief Gray said. Pitts was also active in the Native American Church as a roadman and gave names for members of the Deer clan, Gray said.