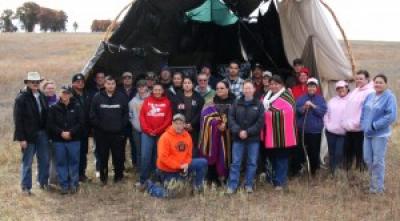 In late October, 32 Osages participated in a two-day Cultural Walk that took them through the very same lands their Osage ancestors passed through 134 years ago, before they were forced to leave Kansas.

“This was something that the Osage Cultural Preservation Committee wanted to do for Osages everywhere,” said Vann Bighorse, Wah-Zha-Zhi Cultural Center director. “The [25-year] Strategic Plan called for more culture, something to bring people back to the reservation and we had families from Texas and Washington that came for this walk.”

Around 30 Osages of all ages met at the Wah-Zha-Zhi Cultural Center the morning of Oct. 24, bringing their camping gear for their overnight stay. The group was taken to Crossbell Ranch, the property of Katsy Mullendore, which sits in the Osage reservation.

The property is host to the lands some 3,150 Osages traveled through in 1875 and still has the original stone marker that marks the 96 degree west longitude line and the 37 degrees north latitude line on the Kansas-Oklahoma border, where they crossed, according to Louis Burns’, “A History of The Osage People.” Out of the Osages that traveled to Indian Territory, 92 percent of them were full-bloods.

Osages mourned their way of life when they left Kansas

Many factors went into the Osages forced removal from Kansas. The construction of a railroad, fertile farm lands, plentiful buffalo, encroaching farmers and ranchers, all wanting to stake their claim, led to the Osages eventual departure.

Osages in the late 1860’s were still hunting buffalo, practicing their religion and living under their clan system of government, according to Burns. But since the Osages reserve was so vast, and the Osage so strong, they were the last tribe made to leave from Kansas by the United States.

Through years of negotiations with the United States government and the Cherokee, the Osage finally reached a deal and bought their land from the Cherokee.

According to Burns, the Osage chose the land around, what is now known, the Indian Villages of Pawhuska, Hominy and Grayhorse because a thick layer of limestone lay beneath the land’s surface, making it impossible to farm. They wanted to live somewhere where they knew settlers would not want to live and so hoped would limit encroachers.

When the Osages left Kansas and made the 300 mile journey, they were depleted in numbers. A large faction of the people had gone for one last buffalo hunt on their Kansas lands, according to Burns.

“The Act of 1870, providing for the Osage removal from Kansas, was barely signed before the demonstrations of sadness commenced,” wrote Burns. “As the Board of Indian Commissioners described it, ‘At dawn on the day after the treaty had been signed the air was filed with cries of the old people, especially the women, who lamented over the graves of their children, which they were about to leave forever . . . .’”

They also left their old form of government. The Osage’s Indian Agent, Isaac Gibson, made them change their form of government into a council with one chief, Joe Pawnee No-Pah-she, or Governor Joe, according to Burns.

Once the small group of Osages reached their camp site on Crossbell Ranch, camp was set up and a traditional meal was cooked by Addie Thomas and Cherokee Cheshewalla, both Cultural Center instructors. She cooked frybread and dried corn over a fire and every person was served as many helpings as they wished in the cool October air. Fires were constructed as the night progressed to keep the participants warm as people told ghost stories, stories of their ancestors, played handgame and enjoyed each other’s company.

Once the sun rose the next morning many participants rose before dawn and prayed as the sun came up. Thomas and Cheshewalla served breakfast to the participants and many took turns getting photos with the historical marker that marked the Osages crossing in 1875.

“I think it’s so important that we remember our ancestors and what they had to give up when they came here,” said Mary Bighorse, a participant on the walk. “I just want to be respectful and remember them today as we do this.”

After breakfast the group assembled under the arbor that the men of the camp helped cover with tarp the night before. Vann Bighorse led an educational discussion about the events that led to the Osage’s departure from Kansas. Dr. Andrea Hunter, director of the Nation’s Historic Preservation Office, talked about the Osage’s origins, their societies and way of life before the move.

“This walk has to do with our tribe, our identity and who we are,” Hunter said. “This is just the beginning, this isn’t just a one time thing. We’re going to do this on a larger scale next year and hopefully there will be more tribal members who come.”

The group set out on the 3.5 mile walk late in the morning Oct. 25. People went at their own pace as the country rose, dipped and curved through the countryside. The fall foliage and wild horses provided a surreal backdrop, and the occasional clearing of trees displayed breath-taking views.

Wah-tian-kah was the adviser to Black Dog, Maker said. He had a vision about the Osages traveling through the land to go to Indian Territory and recognized it because they had hunted there many times before. He spoke of hardships the Osages faced in the move, sickness and malnutrition among them.

“You saw how difficult it was with the road, imagine getting all of your belongings and making a [300 mile] journey on foot,” Maker said. “It wasn’t exactly the Trail of Tears, but it was difficult.”

The participants of the walk were fed a barbeque dinner by the Mullendore family, exchanged contact information and made their journeys home.

One Saturday afternoon this October a small group of Osages began the trek over a rounded hillside on the Crossbell Ranch in northeastern Oklahoma toward their campsite at the Kansas border. I joined the event sponsored by the Osage Nation’s cultural department that invited tribal members to follow part of the 70-mile trail that brought the tribe from its home in Kansas to present day Osage reservation.

The human figures lost in the expanse of open space made me think of our ancestors traveling the same country in 1870, each thinking his or her own thoughts on that last sad walk from home. A herd of horses appeared, running across the horizon, manes and tails flying, bringing me back to the present.

I flew with my husband, David Vik, from our home on an island in the Columbia River in Washington for this event. Over the years I have come back to Oklahoma to visit Morton and Rosa Lee Murray, David Arthur Murray and to be named by Preston Morrell and attend the dances.

My ancestor, Maria James, was taken from her family in the last Claremore raid, lived at Dwight Mission and made her way back to the Osages at Pawhuska late in her life. My father was born near Pawhuska but moved to Denver in the 1920’s when my grandmother tried to separate her family from the alcoholism around her.

I wanted to meet other Osages and walk the route Maria would have followed with her brother, Wah-zhe-pe-zhi, if she could have. I wanted to hear stories that passed down about her and other Osages who were separated from family in the chaos of the 1800’s.

Being outside even for one day and night was relaxing. I watched the sky at twilight, and the stars in the morning when we prayed at dawn. The moments I felt closest to our ancestors were when we tried to get help for a participant who became ill, when we shared stories across the firelight, and when Addie and Cherokee cooked meals over the fire.

What comes back to me now, weeks later are sounds: low voices talking, Frank Redcorn telling me the difference between bluff paint and war paint; Mary Bighorse describing the ghost she had seen tending fire one night, then later hearing ”you never spend the night outside at Grayhorse;” the rhythm of the drum in the Osage handgame.

Sunday morning we sat on hay bales, guests on land that once belonged to the Osage tribe. My relative, Leonard Maker, talked about Black Dog and Wiantanka’s vision for their people.

Maria James spent the years she wasn’t with her tribe praying for them. I too live far from my people but feel connected. I am grateful to have had a chance to return and visit with Osages, who carry the history of my family and tribe from that brutal time into the future.